Facebook tool helps people quickly broadcast their well-being to friends and family after a natural disaster.

As frivolous as Facebook can be, it's where many people turn when disaster strikes. Facebook announced a new feature Thursday to help users broadcast their well-being and check on friends and family members who may have been affected by natural disasters such as hurricanes, tornadoes, earthquakes, or tsunamis.

"Safety Check" will be available globally on iOS, Android, feature phones, and desktops, the social network said in an announcement. If you're in the affected area when a natural disaster strikes, Facebook will send a push notification asking if you're safe.

Facebook says it will determine your location based on information such as the city you list on your profile, the location where you're using the Internet, and Nearby Friends, a feature that tracks your location, if you have it enabled.

If you receive a push notification and are not in the location of the disaster, you can mark that you're outside the affected area. If you're safe, mark that option, and Facebook will send a notification to your friends and post to their news feeds that you're OK. 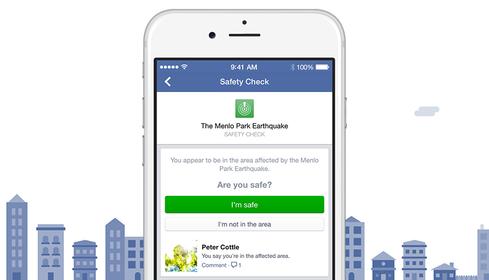 If you have friends in the affected area, Facebook will notify you about the ones who have marked themselves safe. You can also click the notification to take you to the Safety Check bookmark that will display a list of their updates, the social network said. Only your friends will see your safety status and any comments you share.

Facebook said it developed the tool after the 2011 earthquake and tsunami in Japan, which affected more than 12.5 million people. "During that crisis we saw how many people used technology and social media to stay connected with those they cared about."

Safety Check grew out the Disaster Message Board, a tool that Facebook engineers tested a year after the disaster in Japan.

"Unfortunately, these kinds of disasters happen all too frequently. Each time, we see people, relief organizations, and first responders turn to Facebook in the aftermath of a major natural disaster," Facebook said.

Google has also offered tools to help people following crises. It launched a Crisis Response page that highlights information such as storm paths, shelter locations, emergency numbers, and donation opportunities. It has also launched Google Person Finder pages to help people connect with friends and family who may have been affected.

Kristin Burnham currently serves as InformationWeek.com's Senior Editor, covering social media, social business, IT leadership and IT careers. Prior to joining InformationWeek in July 2013, she served in a number of roles at CIO magazine and CIO.com, most recently as senior ... View Full Bio
We welcome your comments on this topic on our social media channels, or [contact us directly] with questions about the site.
Comment  |
Email This  |
Print  |
RSS
More Insights
Webcasts
People Are The Most Important Part of Autonomous SOC
Hybrid Cloud: The Great Balancing Act
More Webcasts
White Papers
Why Add Security to Your Skill Set and How to Do It
How Hyatt Eliminated Bot Attacks Without Impacting their User Experience
More White Papers
Reports
Assessing Cybersecurity Risk in Todays Enterprises
2020 State of Cybersecurity Operations and Incident Response
More Reports

@Joe Haha. It's a creepy feature, which is why I'd never turn it on. I don't need everyone to know where I am (and I don't really care where anyone else is). Too much stalking potential.
Reply  |  Post Message  |  Messages List  |  Start a Board

In terms of friends and family members checking in, you have to remember that most of the world is not like us; they are not connected 24/7 like us tech-heads.  ;)  As such, unlike the social media nerds and the hipsters, they are not likely to go right to FB, Twitter, and LinkedIn immediately after a disaster.

Reminds me of an image that went viral some years ago--of a sign that reads: "IN CASE OF FIRE, EXIT BUILDING BEFORE TWEETING ABOUT IT".
Reply  |  Post Message  |  Messages List  |  Start a Board

The "Nearby Friends" feature is ridiculous.

I remember my first encounter with it.  It told me about one of my female friends being at some local bridal shop with a bunch of other women (I think she was a bridesmaid for someone's wedding).

In instances like this, I would definitely default to Facebook to see whether loved ones are okay. I've already done it when things like earthquakes or wildfires hit wide regions of the country and i'm not quite sure how close friends live to an affected region. (I remember when you posted the "I'm fine" message on FB after the Boston bombing, btw, Joe and it was a big relief.)

It's also a reason I'm mildly upset many family members don't use FB or even Twitter; at least if they had a minimal presence on social media they could use it to check in if something catastrophic happened in their region. If, as I hope never happens, something bad does occur in their regions, I'll have to go back to the old-fashioned route of jammed phone lines and crossed fingers to try to reach them!
Reply  |  Post Message  |  Messages List  |  Start a Board

Safety Check made me think about Facebook's "Nearby Friends" feature. I would never turn this on under normal circumstances because I think it's unnecessary for everyday use, but what if you knew your area would be hit by a severe natural disaster like a hurricane? Coupled with Safety Check, I'd certainly consider turning it on, if just for the short term.
Reply  |  Post Message  |  Messages List  |  Start a Board

I remember a similar response to a friend's post after the Virginia Tech shooting. Amid the chaos, a friend we were concerned about posted that he was ok, to the relief of everyone. Facebook's Safety Check may not be perfect in all scenarios, but it's worthwhile if it helps some people.
Reply  |  Post Message  |  Messages List  |  Start a Board

FWIW, I remember after the Boston Marathon bombing I posted a simple "Loved ones and I are okay" to my Facebook feed.

Neither before nor since have I had a more-Liked status.
Reply  |  Post Message  |  Messages List  |  Start a Board

The especially brilliant thing about this is that Facebook is taking an already popular use of its service and expanding upon it, elevating its own service from a mere "service" to the status of "utility" -- something that people cannot live without -- joining the ranks of electricity and running water.
Reply  |  Post Message  |  Messages List  |  Start a Board

@bkhofmann: This is true. Natural disaster affected areas will have power disruptions, uprooted towers and whatnot. Facebook alone with improper tower connections cannot cover the entire area. If our phones were satellite phones, facebook could have made something about it.
Reply  |  Post Message  |  Messages List  |  Start a Board

That should be the case because when disaster strikes, loved ones would want to know about the current state of the person and facebook would be a good source to say that (a phonecall will suffice too). Facebook should take into consideration road and aviation accidents, but how will facebook know the person is travelling on that train? More tracking?
Reply  |  Post Message  |  Messages List  |  Start a Board
Page 1 / 2   >   >>
Editors' Choice
Hot Topics

CRM Trends 2021: How the Pandemic Altered Customer Behavior Forever Jessica Davis, Senior Editor, Enterprise Apps,  2/18/2021
White Papers
Why Add Security to Your Skill Set and How to Do It
Are We Cyber-Resilient? The Key Question Every Organization Must Answer
Don't Let the Past Obstruct Your Zero-Trust Future
5G-Enabled Edges of Tomorrow Require Converged Network and Security
451 Cloud Confidence Report