What is Facebook up to highlighting trending topics? Think advertiser clout compared to Twitter and online news sites.

Facebook launched its latest move to become your go-to destination for news with a new feature called Trending. This module, found in the upper right-hand column of the news feed, displays a personalized list of popular topics. It is rolling out gradually to users in the United States, Canada, Britain, India, and Australia.

Facebook highlights the topics shown in Trending based on a number of factors, including your interests, who's commenting on a topic, how recently a topic has surged on Facebook, and how much your friends are engaging with it.

Clicking on a headline opens a page where you can explore related posts shared by your friends, pages, and other publicly shared items.

Facebook's Trending feature has been promised since June 2013, when it announced the launch of hashtags. Since then, Facebook has tested Trending in limited release.

"Facebook is utterly dependent on new and fresh content because that's how it draws an audience. If people aren't updating their status or uploading pictures, Facebook gets stale and people won't return," she said. "Facebook is increasingly becoming a new place for news discovery, and by algorithmically updating it to display new content, it's sweetening the pot. It's making Facebook a more compelling content destination." 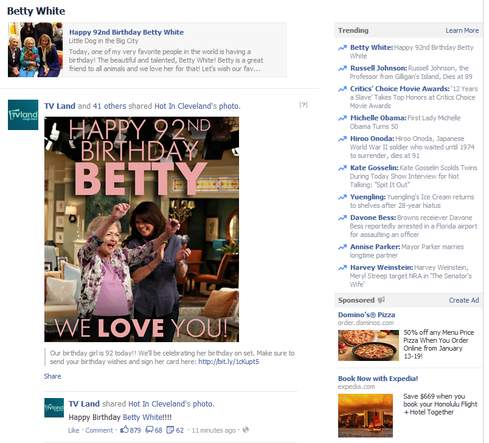 Shifting its focus to content, Lieb pointed out, will also likely pique the interest of advertisers. "When Facebook has more information on the news you're consuming, it can better target ads to you," she said. "Facebook needs to keep getting its audience to come back more and more frequently to consume this increasingly rich river of content."

Trending is Facebook's latest addition to a number of recent content-driven updates. In December, it announced changes to its News Feed algorithm that puts more emphasis on shared articles and deemphasizes memes. It also added a box for related stories.

"The goal of News Feed is to show the right content to the right people at the right time whether it's from a close friend or a news source halfway across the world," Varun Kacholia, Facebook engineering manager, and Minwen Ji, a Facebook software engineer, wrote in a blog post explaining the news feed changes. The update "recognizes that people want to see more relevant news and what their friends have to say about it."

Facebook is also rumored to be launching a news reader soon. Reportedly called Paper, it stemmed from a botched redesign of Facebook's News Feed. It will function either as a standalone mobile app or a web experience for mobile devices.

Lieb noted that Facebook's content push shouldn't be overlooked. "Facebook is really a tremendous force to be reckoned with. It's the largest medium in history, which is really pretty staggering. Nothing has ever had in excess of a billion users -- no TV, no newspaper, no magazine."

Content based on your friend list is a good point -- a fraction of my Facebook friends are my close friends; others are former classmates and coworkers and acquaintances. I probably don't have a lot in common with most of them, so we'll see how useful the suggestions are.
Reply  |  Post Message  |  Messages List  |  Start a Board

The problem with having "trending" topics based on what my friends are reading on Facebook is that I have a variety of friends and don't always share common interests with them. But I do think Facebook can still be a good news source. You must be proactive though. When you follow pubs and websites on FB that are important to you (NYTimes, Wash Post etc), your FB news feed can become a good resource. I've designed it this way, de-emphasizing (hiding) friends and emphasizing news and media. I've discovered a lot of great content this way. I keep friends around who share my interest in news and media (with the hope that they will post interesting content). But I've admittedly hidden friends who post fluff.
Reply  |  Post Message  |  Messages List  |  Start a Board

I don't turn to Facebook for news. Like another commenter said, I go there to see what my friends are up to. But I do discover news there. I follow a number of news pages and organizations on Facebook and do come across news stories I haven't seen and articles to read.

I'm not sure yet how useful the trending topics will be; so far they've been mostly celebrity-focused and I haven't found any interesting enough to drill down further.
Reply  |  Post Message  |  Messages List  |  Start a Board