Facebook will launch an ad campaign structure this week that it says will improve how businesses organize, optimize, and measure their ads.

Facebook's traditional advertising configuration consisted of two levels: campaigns and ads. The social network will add a third level, called ad sets, which will roll out between March 4 and March 30.

Ad sets will fall under the campaign umbrella. Campaigns can have multiple ad sets, and ad sets can feature multiple ads, Facebook said. Adding this secondary layer will help businesses organize ad campaigns, which advertisers complained were messy and confusing.

Once the changes launch, each ad set will have its own budget and schedule. Businesses can organize ad sets by audience segments -- for example, people who live near your store. Facebook said this will help businesses control the budgets for each audience and when customers will see their ads, as well as measure response. The ad delivery system will optimize delivery for the best-performing ad in an ad set, according to Facebook. 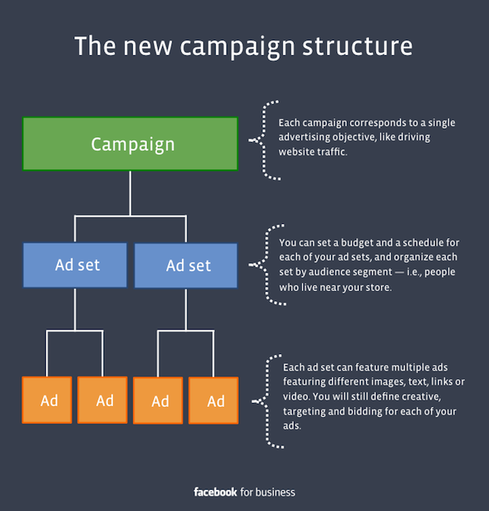 The company explained in a blog post how businesses can set up a new ad campaign using the updated structure:

With the new campaign structure, you'll begin by creating a campaign for each objective. Next, you can create ad sets representing the audiences you want to reach in each campaign. For instance, in the campaign built around driving traffic to your website, you might want to create one ad set for people who are on your email list, and another for people whove expressed interest in attractions near your hotels.

Finally, you'd create ads for each ad set. You can create multiple ads within each ad set, making sure each ad is targeted to the same audience while delivering different images, links, video or ad copy. This can help you learn which ads are resonating with each audience and, in turn, create better-optimized campaigns.

Facebook will migrate campaigns to the new structure when the update hits an ad account. The migration won't impact the delivery, spend, or performance of ads, Facebook said, and businesses will still have access to old campaign data.

Facebook will launch the campaign structure across all ad interfaces, including the Ads Create Tool, Ads Manager, and Power Editor, as well as third-party ad interfaces built by Preferred Marketing Developers.

Businesses can still plan future campaigns using the new structure as they await the account changeover.

To start, the business decides on its advertising objectives and creates campaigns for each one. Then it define the audience it wants to target with each objective, and it creates an ad set for each. Finally, the business creates multiple ads within each ad set and makes sure all are targeted to the same audience and have the same bid type. Facebook said this will help it optimize for the top-performing ads based on the advertiser's variations.

Kristin Burnham currently serves as InformationWeek.com's Senior Editor, covering social media, social business, IT leadership and IT careers. Prior to joining InformationWeek in July 2013, she served in a number of roles at CIO magazine and CIO.com, most recently as senior ... View Full Bio
We welcome your comments on this topic on our social media channels, or [contact us directly] with questions about the site.
Comment  |
Email This  |
Print  |
RSS
More Insights
Webcasts
Zero Trust for a Work-From Home World
People Are The Most Important Part of Autonomous SOC
More Webcasts
White Papers
Why Add Security to Your Skill Set and How to Do It
Protection Strategies for a Cyber-Resilient Organization
More White Papers
Reports
Are Unprotected Cloud Databases Leaking Your Data?
DNS Network Traffic Volumes During the 2020 Pandemic
More Reports

I'd love to hear some stats on the type of people that actually click on Facebook adverts. I'd be very surprised if it didn't fit into a specific demographic. Perhaps a certain age group, or a certain brower type user.

Ultimately whether you're targeting adverts at group users on those on an email list, you have to appeal to that one group that's actually going to click on them.
Reply  |  Post Message  |  Messages List  |  Start a Board

Are you curious to see if you get more ads for local businesses, readers? I will be watching this. Let us know what you see.
Reply  |  Post Message  |  Messages List  |  Start a Board
Editors' Choice
Hot Topics