Foursquare will transfer its check-in features to a new app called Swarm and take on location-based reviews. Here's what you need to know.

Checking into locations just isn't as popular as it once was. In an effort to stay relevant, geolocation app Foursquare has big changes planned.

Foursquare announced this week that it will split the Foursquare app into two apps. The newly rebranded Foursquare app will lose its check-in features and instead will compete with reviews site Yelp, focusing solely on local recommendations. The second app, a new one called Swarm, will gain Foursquare's check-in capability and show users which of their friends are nearby.

The split stemmed from conversations with users, during which Foursquare found that most rely on the app for two reasons: to discover new places and to meet up with friends.

"It turns out, each time you open the app, you almost always do just one of those things. At home, you might be searching for a place for dinner. After dinner, you are probably looking to see what friends nearby are up to," the company said in a blog post.

Foursquare isn't the first company to unbundle its features into new apps. Last month, Facebook announced that it will separate in-app messaging from its official iOS and Android apps and require users to download Messenger to chat with friends. Users will have two weeks to download Messenger before the service in the main Facebook app disappears, the company said.

Foursquare's changes also aim to capitalize on a mobile app trend: Taking online friendships offline to meet up in person. Most recently, Facebook announced its opt-in Nearby Friends feature, which will display your friends' locations on a map and track, store, and share your location with others. 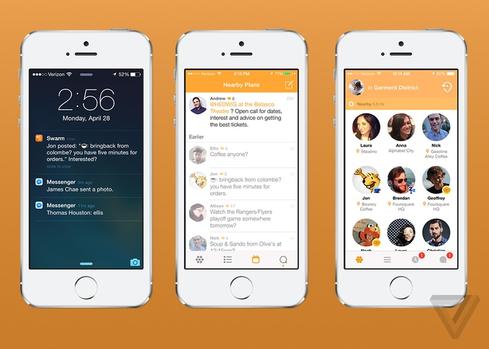 Although Foursquare has always focused on location sharing, other social networks recently have made location data -- however vague -- available to users. Twitter tested a feature that lets you see tweets sent from people near your location, regardless of whether you followed the account. In March, a new app called Cloak launched that pinpoints your friends' social media activity so you can avoid them in real-life.

Foursquare said that Swarm will be faster and easier to use than the Foursquare app of today. Swarm will be available on iOS and Android within the coming weeks, while the rebranded Foursquare app will come later this summer. If you're interested in trying Swarm, you can sign up at Swarmapp.com.

"An app should be able to answer questions like 'give me a great date dinner spot' and not just 'tell me the nearest gas station,'" the company said. "Swarm is for people who want the fastest and easiest way to connect with their friends. Foursquare is for explorers who want to know about the best spots, and to share what they've found with others."

Kristin Burnham currently serves as InformationWeek.com's Senior Editor, covering social media, social business, IT leadership and IT careers. Prior to joining InformationWeek in July 2013, she served in a number of roles at CIO magazine and CIO.com, most recently as senior ... View Full Bio
We welcome your comments on this topic on our social media channels, or [contact us directly] with questions about the site.
Comment  |
Email This  |
Print  |
RSS
More Insights
Webcasts
Ten Keys to Better Security Data Analysis
Optimizing App Performance in the Cloud
More Webcasts
White Papers
Sunburst: Impact and Timeline
The State of DevSecOps Report
More White Papers
Reports
Are Unprotected Cloud Databases Leaking Your Data?
Building an Effective Cybersecurity Incident Response Team
More Reports

Location-based services have been a hot topic for a few years now. This move by Foursqaure very much looks like a way to combat some really big players in the industry: Apple, Facebook and Google.

Is there room for Foursquare? I personally am not sure. It would seem as though the company is angling to be acquired by a larger company like Google. Come to think of it, I am surprised that it hasn't happened yet.
Reply  |  Post Message  |  Messages List  |  Start a Board

I cant imagine a worse idea than to have two sepearte apps for foursquare . This new app will end up being like facebook paper amazing to look at but unused .
Reply  |  Post Message  |  Messages List  |  Start a Board

As an app maker it would seem logical to consolidate as many functions as possible onto a single app in order to capture a horizontal market, I think foursquare did not have the financial mass required to complete the task and hence, it decided to focus on the "location review" vertical market. User reviews have been playing a big part behind a successful product ever since social media took off, and now user reviews of services are beginning to follow the same path.
Reply  |  Post Message  |  Messages List  |  Start a Board

Geolocation capabilities are now part of a number of apps -- Twitter, Facebook, Instagram, etc. Since Foursquare was built solely on location checkins, could it be too late in moving forward with these changes? Or will the Foursquare/Swarm partnership revitalize the app? Let's hear your thoughts.
Reply  |  Post Message  |  Messages List  |  Start a Board

It's not just check-in. You earn specific points, mayorships, badges and it's a small game unlike the others.
Reply  |  Post Message  |  Messages List  |  Start a Board
Editors' Choice
Hot Topics

What Comes Next for AWS with Jassy to Become Amazon CEO Joao-Pierre S. Ruth, Senior Writer,  2/4/2021
White Papers
Sunburst: Impact and Timeline
Don't Let the Past Obstruct Your Zero-Trust Future
Data Orchestration: Critical Elements for Data Strategy and Infrastructure
Building the SOC of the Future
The State of DevSecOps Report