Google on Thursday released a new update to its Hangouts app for iOS that introduces a handful of new features and a redesigned interface.

"The app has a brand new look and feel, is super easy to navigate, and includes a bunch of performance improvements," said Google's Frank Petterson in a Google+ post that announced the changes. "You can still make free voice and video calls, of course. Or send a quick photo. But we're adding a few more features we think you'll love."

More than 40 "stickers" are new to Hangouts 2.0, which are big, animated emoticons that you can add to any message. "Think of them as emoji, but even more awesome," Petterson said. The updated navigation includes tabs on the bottom to quickly archive conversations, mute messages, send videos, and access your contacts. 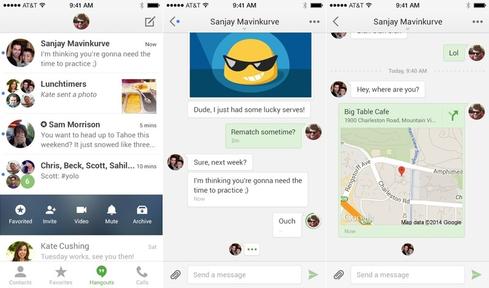 You can also embed a map of your current location in messages, as well as record and send short videos up to 10 seconds long to everyone in your conversation. Tapping the shutter button snaps a photo, and holding down the shutter button captures a video. You can share images from your device's camera roll, but you can't yet share prerecorded video.

The new version of Hangouts, available for download now in the App Store, is fully optimized for iPad users, Petterson said. Changes to the iPad app include picture-in-picture video calling -- which supports up to 10 simultaneous users -- and a split-pane design, which lets you both chat and scroll through your contacts or other existing Hangouts.

Hangouts 2.0 is the first major update since it added phone calls late last year, and helps it compete in an increasingly crowded mobile-messaging market.

Just last week, Facebook announced its blockbuster $19 billion acquisition of popular messaging service WhatsApp. The app, which Facebook CEO Mark Zuckerberg admitted wasn't as popular in the United States as it "should be," is particularly hot in Europe, India, and Latin America, boasting more than 450 million active users.

Reports said that Google once offered upwards of $10 billion to purchase WhatsApp, though Google's Sundar Pichai denied that claim earlier this week at Mobile World Congress, calling it "simply untrue."

Kristin Burnham currently serves as InformationWeek.com's Senior Editor, covering social media, social business, IT leadership and IT careers. Prior to joining InformationWeek in July 2013, she served in a number of roles at CIO magazine and CIO.com, most recently as senior ... View Full Bio
We welcome your comments on this topic on our social media channels, or [contact us directly] with questions about the site.
Comment  |
Email This  |
Print  |
RSS
More Insights
Webcasts
Take DevOps to the Next Level
Cybersecurity Risk Management
More Webcasts
White Papers
2020 SANS Enterprise Cloud Incident Response Survey
The Top 5 Mistakes Everyone is Making in Vulnerability Remediation
More White Papers
Reports
The Infoblox Q4 2020 Cyberthreat Intelligence Report
The Malware Threat Landscape
More Reports

What were the pros and cons from your experience? Anything in particular you think it needs for a broader enterprise adoption?
Reply  |  Post Message  |  Messages List  |  Start a Board

I hear a lot of people experimenting with Hangouts -- we have here for internal and external discussions, and another company reached out to me about doing a broadcast-style discussion. But I don't have a good grip on how widely it's being used. Anyone putting Hangouts to use in their company regularly?
Reply  |  Post Message  |  Messages List  |  Start a Board

I couldn't find specifics about how many downloads the Hangouts mobile app has, though I'd guess it's well below WhatsApp's 450 million.
Reply  |  Post Message  |  Messages List  |  Start a Board

Any idea how many people are using the mobile Hangouts apps? The web version is nice enough but I haven't really needed to use it from a mobile phone. Is it anywhere near WhatsApp in terms of popularity?
Reply  |  Post Message  |  Messages List  |  Start a Board
Editors' Choice
Hot Topics