There are 285 million people with vision impairment around the globe, according to the World Health Organization. Now social media sites such as Twitter are making sure their voices are seen and heard.

Twitter is looking to create more options for those users who can describe the world, but who can't actually see it. A new initiative aims to make it easier for visually impaired people to use the social media platform.

People who are visually impaired will have access to the description through their assistive technology -- such as screen readers and braille displays. The descriptions can be up to 420 characters.

"Photos have been at the center of some of the biggest moments on Twitter. As a core part of the Twitter experience," Todd Kloots, a Twitter staff engineer, wrote in a March 29 blog post. "It's important that images shared on our platform are accessible to everyone, including those who are visually impaired." 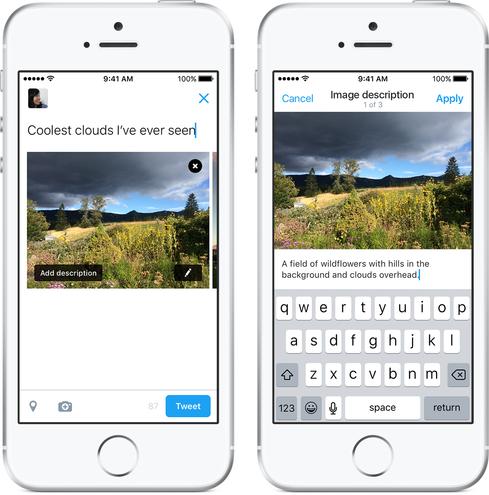 To ensure publishers and third-party clients also have the capability to add alt text to images, the company has extended its platform products to both the REST API and Twitter Cards, with the acknowledgement that this is especially important for specialized Twitter clients for the visually impaired such as EasyChirp, Chicken Nugget, and The Qube.

Overall, the World Health Organization estimates there are 285 million people globally who are visually impaired.

Twitter also unveiled a special resource for making images accessible for people on Twitter, which includes information about how to enable the compose image descriptions setting and instructions for composing image descriptions.

"We're excited to empower our customers and publishers to make images on Twitter accessible to the widest possible audience, so everyone can be included in the conversation and experience the biggest moments together," Kloots wrote.

While so much of today's information highway balanced towards text and visually based technology, major corporations have been reaching out to the visually impaired in an effort to foster a community of inclusion.

Users will be able to interact with the device by means of voice recognition and buttons. The device itself is equipped with cameras that detect the user's surroundings and communicate information to the individual through speakers and vibration motors.

In addition, Facebook has recently rolled out built-in features and technologies that help people with disabilities, like vision loss and deafness, to get the most out of Facebook.

The social media giant also set up a page to highlight the number of visually impaired people who use Facebook and how they connect with the site.

Nathan Eddy is a freelance writer for InformationWeek. He has written for Popular Mechanics, Sales & Marketing Management Magazine, FierceMarkets, and CRN, among others. In 2012 he made his first documentary film, The Absent Column. He currently lives in Berlin. View Full Bio
We welcome your comments on this topic on our social media channels, or [contact us directly] with questions about the site.
Comment  |
Email This  |
Print  |
RSS
More Insights
Webcasts
Protecting Your Enterprise's Intellectual Property
ROI and Beyond for the Cloud
More Webcasts
White Papers
Universal Internet Connectivity: Reality or Myth?
Seven recommendations for a Successful SD-WAN Strategy
More White Papers
Reports
How Data Breaches Affect the Enterprise (2020)
SANS Report: Measuring and Improving Cyber Defense Using the MITRE ATT&CK Framework
More Reports