Do recent lackluster user numbers mean Twitter's strongest days are behind it?

Though Twitter's first-quarter results surpassed revenue expectations, the company's sluggish user growth revived concerns that its days of massive expansion are over.

While Twitter's overall user growth is up 25% from a year ago, its monthly active user growth has consistently declined during the last year. Twitter reported it was up 10% in the first quarter of 2013, but that number dropped to 7% in Q2, 6% in Q3, and 4% in Q4, according to the company's SEC filings.

Twitter's user growth has been scrutinized plenty lately. Earlier this month, a report from Twopcharts found that 44% of Twitter's registered users had never sent a tweet, calling into question the accuracy of the social network's monthly active user count. 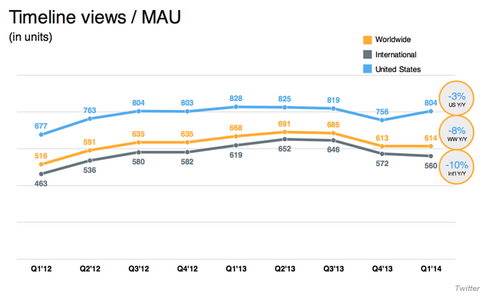 [Not everyone gets it right all the time. Read Twitter Turns 8: How To Fail In 140 Characters.]

Furthermore, the report claimed that of the accounts that had tweeted before, 43 sent their last tweet more than a year ago. Only 13% of Twitter users sent a tweet in the last 30 days, the report found. Twopcharts did not have access to statistics indicating whether any of these users log in to their accounts.

In February, Twitter CEO Dick Costolo addressed its growth issue in the company's fourth-quarter earnings call, promising changes this year. "We are doubling down in 2014 to accelerate the growth of our core user base," he said. "We believe combined changes over the course of the year will start to change the slope of the user growth curve."

It appears, however, that Twitter's latest updates haven't yet produced the intended results. The social network has launched a number of new features to boost user activity, including a new direct messaging feature, the ability to add photos to direct messages, and displaying images in users' feeds.

Most recently, Twitter added photo tagging capabilities for up to 10 people in an image and launched a major redesign that many critics said borrowed too heavily from Facebook.

Despite Twitter's diminishing growth, Costolo said on Tuesday's earnings call that he was "really happy" with engagement in the first quarter. Twitter's new users are just as engaged as older users, he added, and favorites and retweets are up 26%.

"We had a great first quarter," he said. "Revenue growth was up 119%, fueled by two things: increased engagement and user growth. Last quarter I spoke about a number of initiatives to drive user growth, and I like the progress we've made there."

Kristin Burnham currently serves as InformationWeek.com's Senior Editor, covering social media, social business, IT leadership and IT careers. Prior to joining InformationWeek in July 2013, she served in a number of roles at CIO magazine and CIO.com, most recently as senior ... View Full Bio
We welcome your comments on this topic on our social media channels, or [contact us directly] with questions about the site.
Comment  |
Email This  |
Print  |
RSS
More Insights
Webcasts
Zero Trust for a Work-From Home World
People Are The Most Important Part of Autonomous SOC
More Webcasts
White Papers
Sunburst: Impact and Timeline
Prevent vs. Pay: A Better Ransomware Plan
More White Papers
Reports
Protection Strategies for a Cyber-Resilient Organization
Assessing Cybersecurity Risk in Todays Enterprises
More Reports

I'm glad you said that, Paul, as that was my thought too - that some people use Twitter more like a news feed or RSS reader, and not as a communication tool for themselves. It would be more revealing to be clear on how many people log in to view their feeds - that's "active" in my opinion.

I confess that while I do post on Twitter, I go through phases of having the time and inclination to post lots and respond to things. There's so much in my stream it's overwhelming at times.
Reply  |  Post Message  |  Messages List  |  Start a Board

"Earlier this month, a report from Twopcharts found that 44% of Twitter's registered users had never sent a tweet, calling into question the accuracy of the social network's monthly active user count."

Do you need to tweet to be an active user? I don't think so. I primarily use it to follow others like news stations, athletes, writers, police department etc. You can find out information quicker that way sometimes. I don't tweet at all really, but I would call my self an active user.
Reply  |  Post Message  |  Messages List  |  Start a Board
Editors' Choice
Hot Topics

More Informa Tech Live Events
Hybrid Cloud: The Great Balancing ActCybersecurity's Next Wave: What You Should KnowStrategies for Success with Digital Transformation