SEARCH
A minimum of 3 characters are required to be typed in the search bar in order to perform a search.
Announcements
Event
SupportWorld Live: May 15-20, 2022 | MGM Grand, Las Vegas, NV
Event
Data Center World is the leading global conference for data center facilities and IT infrastructure professionals.
Report
IT Enterprise Dashboard: This interactive data tool enables access to global research on IT budgets, business challenges
Event
Get in-depth insights & analysis from experts on all aspects of communications, collaboration, & networking technologies
Report
Find out what you need to know so that you can plan your next career steps and maximize your salary.
PreviousNext
Software
Feature

Technology Innovation One Scoop At A Time

The company's system is meant to change that. Founder Paul Kateman envisioned "on-demand" ice cream that consumers could enjoy anytime, anyplace. With considerable engineering and 14 patents, MooBella is on the verge of realizing that vision. It has installed one unit at Boston University and another at Children's Hospital in Boston.

Unlike single-unit vending machines, MooBella's system consists of seven modules connected through a PC motherboard running Red Hat Linux on an AMD 1.2-GHz processor. That means manufacturing can be outsourced for assembly."We've taken advantage of the computer-based system, which allows us to design, build, and test a module independent of everything else that's going on in the machine," says VP of engineering Jim Baxter. "And that not only helps us manufacturingwise, but also with serviceability. It's basically plug-and-play."

From Keypad To Cup 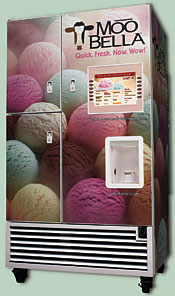 The sophisticated internals are invisible to consumers, who use a touch pad and 15-inch flat-panel display to select flavors. What happens next is an ice cream geek's dream: "We pump the base mix, aerate it, flavor it, flash freeze it, scrape it up off of a freezing surface, form it into a scoop and into the consumer's cup in 45 seconds," Baxter explains.

The company chose Linux because it's an open system that has proved reliable in industrial environments, and there are no licensing fees, Baxter says. MooBella's LAMP software stack--Linux, Apache, MySQL database, and PHP--is wireless and Internet-capable, allowing remote monitoring of sales, ice cream supply, and machine diagnostics.

The machine's processing power is necessary to handle MooBella's food product database, which manages the mixing process to account for the unique preparation requirements of 96 ice cream variants. Mix-ins like walnuts and cookies have physical characteristics that require different temperatures and motor speeds.

Another innovation is the ice cream mix. The aseptically packaged mix doesn't require minus-20 degree Fahrenheit warehousing and distribution like typical ice cream. "We can ship our ice cream mix on a UPS truck and it requires no refrigeration until it goes into the machine," Baxter says. That leads to lower supply chain costs. Forrester analyst Patrick Connaughton sees potential in the approach. "Should this method for making ice cream take off, it could eliminate one of the biggest cold-chain challenges out there," he says.

MooBella wants to sell ice cream in retail stores, where "space is money," Ginsberg says. He thinks MooBella's technology could be applicable to overseas markets like China where cold storage and distribution aren't widespread.

MooBella is finalizing the machine's design, with the goal of having 200 distributed around New England by the end of next year. "This system allows us to take the next step, in terms of food product innovation, into probiotics, fibers, the real good-for-you stuff," Ginsberg says. Good-for-you ice cream? In that case, make it two scoops of vanilla with peanut butter cups.