8 MOOCs Transforming Education
(click image for larger view and for slideshow)
Online education site Udemy is stepping up its appeal to instructors and students whose native language is not English, introducing a multi-lingual version of the site.

Udemy.com is now localized for Spanish, Portuguese, French, German, Japanese, Chinese, Italian, Russian and Turkish. This does not mean all content is available in all of those languages, but the website itself -- all the user interface for navigating the site and searching the course catalog -- is available in all those languages, making it easier for those who are not native English speakers to browse the site and find content in their native language, according to Dennis Yang, president and chief operating officer of Udemy. A planned next step is to provide subtitles in other languages, he said.

"As an instructor, you could already have created courses in other languages," Yang said, but without localization the site did not provide as good of a marketing platform for instructors targeting those other languages as it will now. "We think this will unlock the potential for lot more foreign language content to be created."

[ How do people choose which massive open online course to take? Read MOOC Students Attracted Most By Course Topics.]

Udemy already gets 50% of its students visiting from outside the U.S. and offers more than 600 courses in Spanish and almost 150 courses in Portuguese. Several non-native English-speaking instructors have earned real money on the platform, including Madrid-based instructor Fernando Rodriguez, whose Spanish-language iOS programming course has earned $32,000 in its first two months on Udemy. Another instructor, José Maria Gonzalez, has already earned over $15,000 since launching his Spanish-language course on virtualization at the end of June, according to Udemy.

One of the instructors from Portugal, Victor Bastos, is a freelance Web developer who was recently featured in a Slate article as someone who made more than $450,000 in a year and a half of teaching his "Become a Web Developer from Scratch!" course. Although he earned the bulk of that from an English-language audience, he already offers a version of the content in Portugese.

Although Udemy is often associated with the rise of massive open online courses (MOOCs), it is not operated on the same model as Coursera and edX, which offer university courses for free. Although Udemy offers some free courses, most of its online education is promoted as being inexpensive, rather than free. Also, the instructors typically are not university professors -- anyone with the knowledge to teach and an engaging teaching style can be a Udemy star. A big part of the Udemy story is its value as a money-making platform for instructors, most of whom provide instruction on technical topics such as Web development or the use of specific software programs. The site also offers courses on business, health and many other topics. 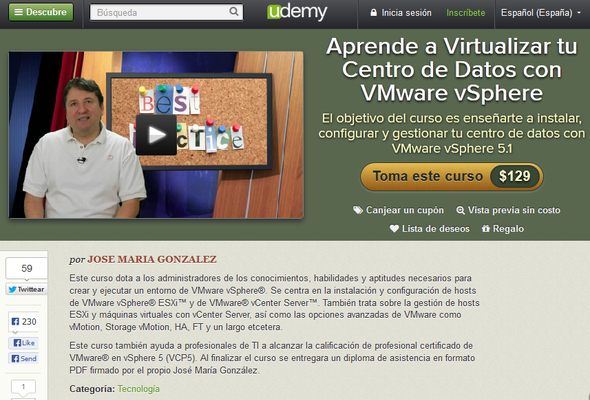 A Udemy course on virtualization, offered in Spanish.

"The internationalization of Udemy is a deeply personal project for me," Udemy CEO Eren Bali said in a statement for the press release. "I grew up in a single room schoolhouse in Southeastern Turkey, and while the Internet helped me lift myself up in ways I never imagined possible, so much of the great learning content available online is only in English. I couldn't be more excited to be part of a force that helps remove this language barrier for good."