The mobile player detects a smartphone's browser capabilities during download and uses the information to determine the appropriate version of the player.
Antone Gonsalves
Contributor
August 17, 2010 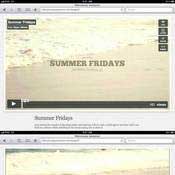 (click image for larger view)
Vimeo Universal Mobile Video Player
Vimeo plans to launch a mobile player that can play content from the video-sharing site on smartphones that support Adobe Flash, as well as Apple's iPhone and iPad, which leverage HTML 5 for video playback.

Vimeo said it would release the Universal Player Tuesday. The site delivers support for either Flash or HTML 5 by detecting during the download the capabilities of the phone's browser and then using that information to determine the appropriate version of the player. Flash is supported on phones based on Google's Android operating system.

Once embedded in the browser, the player can be updated as new versions of Flash or HTML 5 implementations are released, Vimeo said. This feature is particularly important because Flash 10.1, the latest version, is only available in beta.

"The new embeddable code is highly scalable and allows us to continue to add support as new browsers and devices are released, for example, serving HTML5 to IE9 (Internet Explorer 9) and our Flash mobile player to Android phones running Flash 10.1," Andrew Pile, VP of product and development for Vimeo, said in a statement.

Vimeo is a smaller player in the online video-sharing market. The site did not make the top 10 in ComScore's latest list of online video properties.

Nevertheless, the announcement reflects how content providers are trying to remain agnostic in the battle between Adobe and Apple over the use of Flash or HTML 5 on mobile phones. The two companies have feuded publicly over which technology is best suited for the limited resources of smartphones.

The battle has led to some strange bedfellows, such as Adobe's alliance with Google, which competes against Apple in the mobile market. At the Google I/O conference in May, the Internet company announced that Android v2.2 would support Flash, which is used on the majority of websites. In making the announcement, executives showed an Apple iPad unable to access a Flash-based page, while an Android 2.2-based smartphone ran the site flawlessly.

-- Strange Bedfellows, Google And Adobe Gang Up On Apple