SEARCH
A minimum of 3 characters are required to be typed in the search bar in order to perform a search.
Announcements
Report
Find out what you need to know so that you can plan your next career steps and maximize your salary.
Event
Explore strategies, new technologies, and best practices to provide a secure infrastructure - Learn more at Interop!
PreviousNext
Software
News

Aggregate and search through all of the files from all of your Web services in a single place with ZeroPC.
Jeremy Lesniak
Contributor
November 22, 2011

ZeroPC is a relatively new entry to the cloud desktop arena. Designed to compete with products such as eyeOS, ZeroPC targets the home user and a few vertical markets such as education and SMB. It attempts to take the functionality of Google Docs or Office 365 and add a lot more. It integrates with a wide variety of Internet cloud services, such as Evernote, box.net and Facebook, letting you move data between them.

ZeroPC promises to put everything you need for a typical computer session into the cloud, where you can access it from anywhere you have a browser. Though many services provide a data repository you can hook to various computers, ZeroPC brings the computer environment itself to the Web. And though it does offer you the option of storing your content within your own personal ZeroPC account, I found the interaction between ZeroPC and other services such as DropBox to be superior. 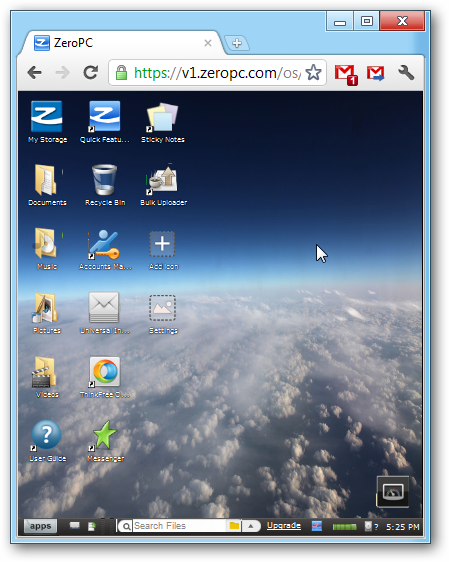 ZeroPC provides a familiar Windowslike interface from which to access files from a variety of Web services.

As with many Web products, basic use is free. Additional functionality, such as ZeroPC's cloud backup service, is available at a "pay as you go" rate. Rather than giving you certain features at a set price, ZeroPC charges based on bandwidth and storage used. Though it's affordable, with very few users spending more than $5 a month, it's like a cellular data plan.   I am already paying my cable company for Internet access to send and receive data through ZeroPC's servers. ZeroPC also wants its piece of the pie, and it charges you based on the amount of data you push and pull through the service. Even if you used its service as your exclusive computing platform, most people wouldn't spend more than a very fair $10 a month. The free version offers 15GB of storage (1GB on ZeroPC's servers and a minimum of 14GB pieced together from other partner services.

ZeroPC runs on Java through your browser and includes access to ThinkFree Office 4. I had no issues creating or editing my Microsoft-formatted files through the ZeroPC File Explorer. However, ZeroPC did let me exit an unsaved file without prompting me, which I found unnerving. It was solid and very fast on several computers running Windows 7 and the developer preview of Windows 8. Apps for the iOS and Android tablets and smartphones should be available soon.

There's also a universal IM client that I tried out, which allowed me to connect with Yahoo, MSN, ICQ, AIM, and Facebook, but the free version of ZeroPC allows only 15 minutes of daily use. I found this to be strangely limiting compared to the rest of the features in the free product. Most of the programs available in ZeroPC are called Web apps, but they're really just bookmarks to Web pages and services. You can add new ones to the desktop easily, or even make a shortcut to a folder or file. 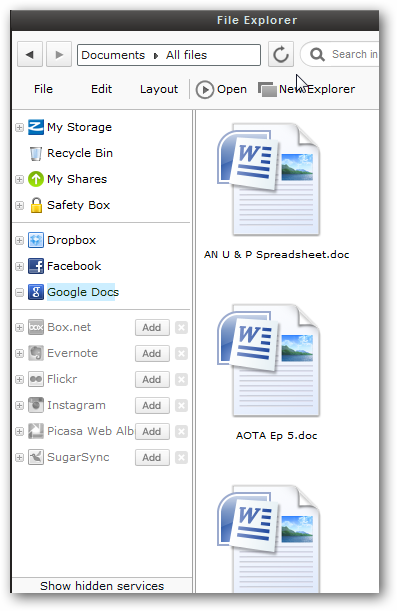 ZeroPC's File Explorer gives you access to all of your files from all of your Web services in a single aggregated interface.

Sharing is a major feature. You can share files or folders via email, Facebook, or Twitter. The sharing ties a bit.ly link to the items you're sharing and, when viewed by recipients, the file or folder is displayed in an attractive Web page. Unsharing is just as easy. You can even share major portions of your desktop with other ZeroPC users. I tried it and it worked, but I wasn't sure why you might want to do it--Google Docs or a shared Dropbox folder can do virtually the same thing.

Security is fairly well designed and there are some nice touches. You can set up a lock screen PIN as a convenient way to secure the computer while you step away. This is better than a full log out if you're in a relatively secure setting. You can even set up temporary passwords for using public computers.

The notion of a full desktop experience in the cloud is exciting, and ZeroPC makes an admirable attempt, but it falls short in a number of ways. I find myself liking it--but mostly due to the refinement and speed of the interface. I'm having a hard time thinking of why I, or most of the world, would ever need it. It seems as though its greatest value is in aggregation and search. It might do well as a similar service to Dropbox or SugarSync, provided it aggregated everything back to its owning service. As it stands, ZeroPC is strongest when you use it as your primary interface, but that also leaves you stuck when the cloud evaporates. At the same time, this could offer a low-cost way to allow users to share physical hardware while maintaining their personal data and settings.

In the end, I keep coming back to the fact that this is a great product--but one that doesn't seem to satisfy a widespread need.