With just 8% of respondents to our 2012 survey expecting to build new facilities and constrained budgets the No. 1 impactful trend, it's clear enterprise IT's transformation to service provider is in full swing.

So why all the interest in standardization? A primary goal is to eliminate repetitive work and overhead so we can free up resources for innovation, and in that sense, respondents are succeeding. While 67% of the IT budget is still spent on maintenance and operations vs. 33% on innovation--little changed from last year--it's still a victory for efficiency: 67/33 is the new 80/20.

One engineer with an energy services company that's approaching 70% virtualization has been at it since 2004. More than 90% of its mission-critical Tier 1 applications rely on VMware virtualization and mirrored SAN technologies between two data centers, with service-level agreements of less than one hour in most cases. "We have had a 'virtualize first' policy over the last four years," he says.

But maybe "virtualization" is too imprecise a term, since our survey shows that in the enterprise, virtualization means VMware. Fully 53% of our respondents name VMware's management platforms, vCenter and vCloud Director, as their standard or preferred software stacks, leaving Microsoft's System Center in the dust with only 10%. Every other platform, whether from established virtualization companies like Citrix or new private cloud upstarts like the OpenStack spin-offs, stayed stuck in single digits.

There's still a need to up our game, however. While the extent of server virtualization is rising, the level of sophistication remains rather low. Specifically, virtual machines are often a one-for-one replacement for dedicated, standalone servers, rather than part of a private cloud self-service utility. Although two-thirds of respondents have private cloud plans, only 30% have made substantive progress building them. Just 8% are avoiding private clouds, with 25% in that wishy-washy "investigating" phase.

In sum, despite the vendor hype and IT lip service paid to private clouds, such tepid adoption suggests enterprise buyers are unsure what a private cloud really buys them.

We're not worried about private and hybrid cloud adoption--this is one technology where the more IT teams learn, the more they see the benefits. For example, 40% cite flexibility to meet new business needs as a top infrastructure requirement, a goal that should ultimately translate into greater interest in private cloud software stacks.

Yet the key is building a hybrid architecture with the right fuel mix of public and private cloud resources. Few companies are ready to ship everything off-site--only 4% say they run applications on an infrastructure-as-a-service platform whenever possible--but the public cloud has gained respectability in most IT shops. Fifteen percent put it among the top three factors that will most change data centers in the next year. 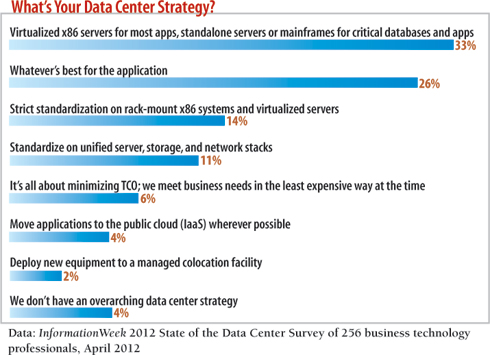