50%
Tweet
It does seem as if the SOPA and PIPA bills will facilitate abuse of innocent Internet users. So what do we do about the abuse of IP holders?

There will be no Wikipedia today. The English version of the site has blacked itself out in protest over the SOPA bill in the US House of Representatives and the analogous PIPA bill in the Senate. 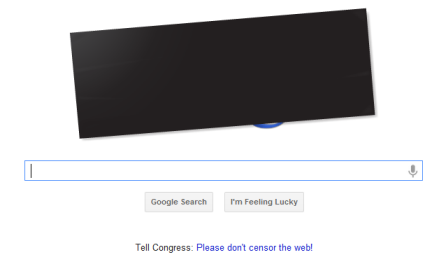 Like a lot of legislation, it's impossible to tell at this point what actual impact the current bills would have if they were to become law, which they won't because, even if both passed, there at least needs to be a conference to settle any differences between them. They're too complicated and leave too much discretion to the executive and judicial branches to know how they would be implemented. Opponents are assuming, and there's usually good reason to do so, the worst case scenario. Prosecutors and civil litigants will take what you give them and then some more.

I'm not going to go into detail about the bills. From what I've seen, I'm satisfied that they will provide sufficient leeway to allow abuse of innocent 3rd parties, like open source software developers and small web sites which don't have the resources to research every link they post. For that reason they bother me. The use of the word "censorship" seems histrionic to me, but yeah, it could happen.

But that's not the only thing that bothers me. I make my living from intellectual property and I think it's a reasonable thing for creators and owners of such property to demand compensation for any use of it. This thesis is at the heart of the debate here, because many of the opponents of SOPA and PIPA, at heart, don't believe in copyright or any other intellectual property. It's not hard to find people openly contemptuous of it, from open source pioneer Richard Stallman to the Pirate Bay, a classic example of the sort of piracy-facilitating site that these bills target.

The Pirate Bay is very clear about what they are doing, even if they are being disingenuous about their culpability:

Only torrent files are saved at the server. That means no copyrighted and/or illegal material are stored by us. It is therefore not possible to hold the people behind The Pirate Bay responsible for the material that is being spread using the tracker. Any complaints from copyright and/or lobby organizations will be ridiculed and published at the site.

There are other sites though, which aren't so open about their motives and warez. Where SOPA and PIPA get really tricky is where they target sites that surreptitiously sell pirated content and knock-off products as legitimate, and of sites which "facilitate" such sales. There are two important points I would make about these matters:

The tension between these two points leads inexorably to a balancing effort. Any law which addresses these problems will have to be a combination of enforcement provisions and limitations on those provisions in order to protect 3rd parties.

There has already been a lot of compromise on SOPA and PIPA. The provision which would have required DNS administrators to police their databases is gone, for example. False claims of infringement under the bills can lead to damages against the claimant, including costs and attorneys' fees. There is an obvious effort going on to make the bills acceptable.

It's also worth noting, not necessarily as a defense of them, that these bills have broad bipartisan support. The sponsors are mostly Democrats, including some very liberal ones like Al Franken and John Conyers. In fact, in the Senate PIPA is basically a Democratic initiative with some Republican support. I'm not sure what conclusion to draw from this; it's not uncommon for either party to run roughshod over people's rights, but the opposition to SOPA/PIPA seems to me to be largely leftist in spite of the position of their representatives.

Rejecting the objectives of SOPA and PIPA out of hand is not a reasonable response unless you at least try to come up with some alternative. There is a problem to solve here. If you don't think there is a problem, then you are far out of the mainstream. Therefore my outrage today over "censorship" is tempered by my outrage over piracy. I hope and think that the end result of this process will be a more moderate bill that allows for increased enforcement of property rights.