SEARCH
A minimum of 3 characters are required to be typed in the search bar in order to perform a search.
Announcements
Report
Find out what you need to know so that you can plan your next career steps and maximize your salary.
Event
Explore strategies, new technologies, and best practices to provide a secure infrastructure - Learn more at Interop!
PreviousNext
Strategic CIO
Commentary

In this first of a series on the great technical minds of history, Howard Anderson chronicles the enormous impact of the inventor of the steam engine.
Howard Anderson
Senior Lecturer, Harvard Business School
February 28, 2013 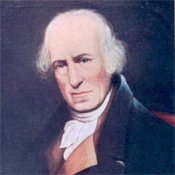 James Watt
We stand on the shoulders of giants. Virtualization, cloud computing, smartphones -- they all came from somewhere. What's the greatest invention of the last 300 years? The telephone? Computer? Internet? Remote clicker? Nope. It's the steam engine, the invention that launched the Industrial Revolution and changed the world.

When the sun finally came out in Britain in the 1720s, agriculture blossomed … and prices fell. Suddenly, many of the 97% of the population who made their living off the land had to find some other way. Instead of making crops, some had to make products.

Problem: The existing metals were too brittle and wood was too soft for manufacturing. So iron was needed for gears and wheels, but iron ore was underground and the mines often flooded. The usual solution was to have horses go round and round in a bucket brigade, but that method was costly and inefficient -- and it left lots of poop.

Enter James Watt, a technician at Glasgow University who was doing repairs on an early version of the steam engine. Like any good entrepreneur, Watt improved the design, got a patent carving out a monopoly, attracted an early venture capitalist (Mathew Bolton) and created a new business model: leasing steam engines to mine owners for a third of what it cost them in horse power and later in the cost of coal.

By 1776 Watt was installing engines in mines, but others began finding new applications -- using them for grinding, weaving, milling. By 1807, Robert Fulton had mounted a steam engine on a boat and was offering passenger service from Albany to New York in 32 hours (150 miles). Soon steamers were hard at work on America's rivers, and freight costs dropped from $5 for every 100 pounds to … 25 cents. Take that, Gordon Moore! It used to take a month to move a flat bottom boat down the Mississippi and three months to bring it back up. Steam engines cut those times by 75% to 85%.

Watt basically started the Industrial Revolution. Before him, animal power; after him, steam power. Put a steam engine on a ship and you no longer depend on the wind. You can cross an ocean in days, not months, and you can drop the cost of shipping cargo by 95%.

Put the engine on rails, the same thing happens. Instead of horses carrying freight, rails could do it quicker and more reliably. By 1829, steam locomotives had started, and over the next two decades this was the hot growth industry, replacing canals as the primary mode of freight transport.

If the Brits had such a head start, why weren't they more dominant in technology? Good question. They had first-rate universities. They had a rich history of scientific discovery. They had plenty of experience providing risk capital -- who do you think financed all of those railroads and ship building companies? They were quite serious about patent protection. James Watt spent half his career suing those who infringed on his intellectual property.

In fact, Britain allowed New York and Paris to have Watt's pumps only to help with the water supply -- and this was done for humanitarian reasons.

Part of the problem, as watchers of Downton Abbey well understand, is when rich people are rich because they inherited their land but weren't into "commerce." Too tacky. Land rich but cash poor. Want an example?

Back in the 1400s the nobles wanted brighter hues for their coats of arms so that their soldiers could identify their leaders from the next hill during battle. But the British tradesmen weren't inclined to do the experimentation necessary to make what the market needed. The Germans were, and they quickly became the suppliers. From this chemical work came the German chemical industry, then the petrochemical industry and even the budding pharmaceutical industry. All this while the British were standing around, waiting to be properly introduced.

Watt did more than just perfect and commercialize the steam engine, He was the catalyst for creating new opportunities in textiles, land shipping and open water commerce. In one fell swoop, he disrupted the status quo and created enormous value. All the subsequent development in manufacturing owes a debt of gratitude to him.

When an industry changes, the battle is first won by the arms merchants … and Watt was the first of these. He created Power and everything after that was an application of Power.

Next In Our Series: How Watt's innovation jumped the Atlantic to America.