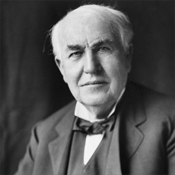 Thomas Edison
Mr. Edison, you're The Man. Two years ago, in 1877, you invented the phonograph, which amazed the world and changed the entertainment industry. You're not only the Wizard of Menlo Park, you're the Steve Jobs of your era.

You have invented the stock ticker (which is really just an application of the telegraph, and you were a crack telegraph operator, which is where you got interested in electricity), the movie camera and the microphone for the telephone, which will be used for the next 80 years. You almost invented the telephone -- in fact, you and Alexander Graham Bell had labs in the same building in Boston at the same time. You have revolutionized or started five or six major industries. You will eventually have 1,093 patents in your name.

Me: Tom, great invention. Where do I plug it in?

Tom: You can't plug it in unless you have a battery. (I actually have built an advanced battery for electric cars, by the way. See me in about 125 years and we'll catch up on how this is going.) Just attach it to a battery.

Me: Battery? That’s not going to hack it.

Tom: Hey, do you want to keep getting your light from natural gas? Smelly! Dark! Causes smoke and fires. Your current method just won't hack it.

Tom: Here's my idea. I'm going to build a company, the Edison Electric Light Co., and we'll generate electricity. In fact, I'll build branches all over the country: Consolidated Edison, Southern California Edison, Detroit Edison, Boston Edison. … They'll wire factories and homes everywhere. We'll do generation, but I still have to invent the technology and distribution, so I have to figure out how to do the step down and step up. Shouldn't be a problem. I have J.P. Morgan and Cornelius Vanderbilt ready to finance this.

Me: Tom, Tom, Tom. Who is going to manufacture all this stuff?

Tom: Funny you ask. I'm going to start a manufacturing company, Edison General Electric. Maybe one day we'll just call it "GE." Maybe we could actually finance some of the equipment we make.

Me: That sounds great, but how are you going to keep improving the product?

Tom: I'm going to invent the research lab, whose only job will be to invent things. I will hire the best and the brightest. Some stuff we'll invent and manufacture, and others we'll license.

Me: Tom, let me understand this. You're coming up with a major invention every two years -- revolutionizing inventions. You're going to put the candle and natural gas companies back on their heels, and you're going to wire America, if not the world, to get electricity … which you're going to sell as a service! And you're going to build all the equipment you need … and then sell it to your own electric utilities. And then you're going to create the largest R&D organization in the world?

Tom: I don't plan to sleep. Sleeping's for wimps.

Me: Tom, you must have a very smart staff.

Tom: I have some terrific people. In fact, I have to run off to a meeting with one of them, Nikola Tesla. Very bright guy, very bright. He thinks that "alternating current" may be better than direct current. What do you think?

Me: AC would be great for electrocuting animals.

Tom: Exactly! That's what I keep telling Tesla. Let me tell you about Tesla. The guy is a certified genius. He comes up with solutions to problems and then forgets to write them down. Me? As soon as I or my team has something, bang, we're off to the Patent Office!

Me: You're a very busy man. By the way, since you have so many patents in the movie industry, what do you think about "talkies" -- marrying your voice technology from the phonograph with your movie camera?