When businesses deliver products and services via the cloud, the IT department and the product team become inseparable. That's why ADP combined its infrastructure and R&D teams under a single tech executive. Here, he talks about the organization and projects currently underway.

ADP is a name many workers recognize because it's been printed on paychecks for decades. This $10.7 billion company, founded in 1949, offers human resource, payroll, tax, and benefits administration solutions. It's been a stalwart among US-based businesses, even as technology changes the corporate landscape.

That may be because ADP has been changing, too. As the company moved its services to cloud computing, customers followed, and now software-as-a-service (SaaS) is the predominant way that ADP delivers services. That change has meant that ADP's IT infrastructure and products are now closer together than ever.

To keep up with these changes, about five years ago the company put its traditional CIO activities and its product and service research and development work together under a single umbrella.

Stuart Sackman, corporate VP of global product and technology, heads that organization at ADP. He recently spoke with InformationWeek about this move, as well as other changes in the larger technology landscape, and how ADP is capitalizing on the opportunities.

The process began with the closer alignment between these traditional CIO activities and the more strategic product and R&D efforts.

"The connection between our client-facing applications and the way they get deployed in our network and infrastructure just keeps getting tighter and tighter," Sackman told InformationWeek in an interview. "As those things got tighter, we made the decision to combine the traditional CIO organization and the R&D organizations."

ADP had previously organized its infrastructure teams by the level of the IT stack or functional expertise, Sackman said -- in database, storage, or networking. The transition to the new organization wasn't always easy.

Sackman's team, which he says currently totals about 8,000 employees, took that effort a step further over the course of the last year with a reorganization designed to more closely align the IT organization's interests with the business's interests. 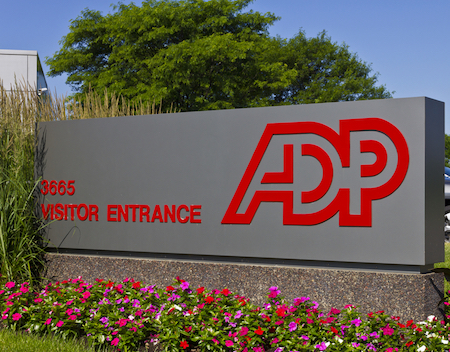 Here's how it works. Each ADP product team includes its own dedicated mini-IT, or infrastructure team -- a group of IT pros who specialize in storage, compute, network, and database.

"This has allowed us to bring the teams closer together," Sackman said. "The performance of our applications is demonstrably better. We can measure that through latency, but we also get feedback direct from our clients. We know we are better."

Potential drawbacks of the reorganization included the economics of the change. Would it be more expensive to do it this way? But Sackman said that IT costs are down on a relative basis. They are growing slower than the company's volume of work.

ADP also launched the ADP Marketplace two years ago, a portal where the company publishes its APIs to enable integration with third-party applications that can offer end-customers additional functionality. ADP currently has a couple hundred partners participating.

Sackman says that the open API economy grew out of the hope that drove the initial boom of ERP (enterprise resource planning) systems.

"There was an idea back then that you could get an on-premises ERP system from a large company, and that system would do everything for you. But that never worked," Sackman said.

To supplement, organizations would add, for example, a new recruiting system or a new performance management system and integrate that. Then the whole IT stack would become more complex and difficult to maintain and upgrade.

Now we have the "API economy," Sackman said. Every application ADP builds is API-enabled, and ADP is retrofitting all of its older applications. The company is developing a set of canonical APIs across its portfolio that are published in the ADP Marketplace.

"The goal of the marketplace is to let clients personalize their ADP solution around their unique needs," Sackman said.

ADP is also investing in providing clients with more insights and information, Sackman said, in the form of ADP DataCloud.

According to Sackman, ADP touches one in every six people paid in the US, so the company can provide insights into salary rates, pay increases, benefits, and more. He said ADP is also investing in predictive analytics that could alert client companies if a valued employee may be thinking of looking for another job -- a "flight risk."

ADP operates its own data centers, although Sackman said the company endeavors to make its data centers behave like public cloud. The company is using some actual public cloud for some R&D projects. A lot of the company's application are backed by Oracle database, but newer applications may use other databases such as Cassandra, MongoDB, or MySQL, depending on the application's needs.

Sackman said that custom systems were big in the 1980s, ERP was big in the 1990s, and the next big transition will be a change to a more humanized way of dealing with applications as organizations leverage advances in machine learning and natural language processing.

According to Sackman, he's not the only leader of a merged IT and R&D team. It's a growing trend as so many companies, regardless of industry, are becoming technology companies.

"Technology is key and plays a bigger and bigger part in every business," Sackman said.

Jessica Davis is a Senior Editor at InformationWeek. She covers enterprise IT leadership, careers, artificial intelligence, data and analytics, and enterprise software. She has spent a career covering the intersection of business and technology. Follow her on twitter: ... View Full Bio
We welcome your comments on this topic on our social media channels, or [contact us directly] with questions about the site.
Comment  |
Email This  |
Print  |
RSS
More Insights
Webcasts
Take DevOps to the Next Level
Cybersecurity Risk Management
More Webcasts
White Papers
2020 SANS Enterprise Cloud Incident Response Survey
The Top 5 Mistakes Everyone is Making in Vulnerability Remediation
More White Papers
Reports
Protection Strategies for a Cyber-Resilient Organization
Building the SOC of the Future
More Reports

Does Identity Hinder Hybrid-Cloud and Multi-Cloud Adoption? Joao-Pierre S. Ruth, Senior Writer,  4/1/2021
White Papers
2020 SANS Enterprise Cloud Incident Response Survey
The Top 5 Mistakes Everyone is Making in Vulnerability Remediation
Smart Service Management: Working Better Together with a Connected Enterprise
The Five Major Security Pitfalls of WFH and How to Solve Them
What is Pure Signal RECON?