38 comments
Comment Now
Once upon a time, microcomputers weren't all-in-one devices. They were put together from standalone components, each with its technical merits -- and we had to know all about every one of them. 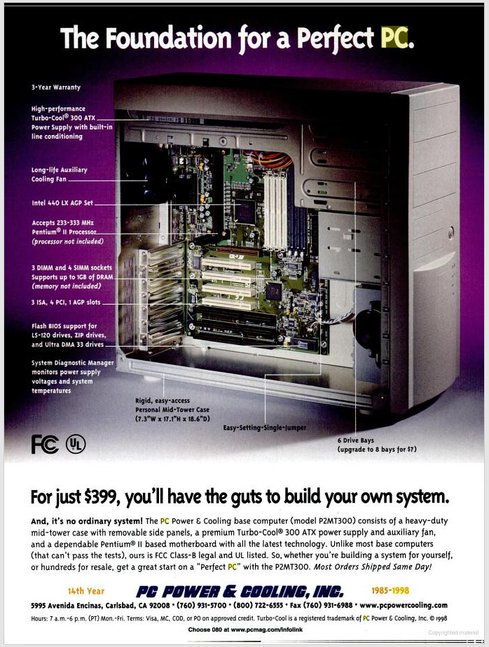 Everything started, naturally, with the chassis into which you plugged all the components. You needed room for all the cards and devices, which forced several decisions. For example, you had to ask yourself: "Do I want a full-height floppy drive?," "Will I use an internal tape drive?," and "Are any of my cards full-length?"

You also had to determine which CPU you planned to use, and whether it ran so hot that you needed a dedicated fan to cool it off, so the computer wouldn't overheat.

The answers to each of those questions affected the number of drive bays you needed, and thus how big the actual physical box would be. It was a three-dimensional jigsaw puzzle.

Most of my computers were too tall to fit under my desk. It was also a mark of geek pride if you never bothered to put the case back on the computer.

The above magazine advertisement, from 1998, is relatively late in the era. For $399, you got "the guts to build your own system," which meant it included the case, the motherboard, a power supply, and a fan. That was a fair price for a (sort of) pre-built system. Of course, there wasn't a CPU, storage, video, multimedia, or monitor.

Broadway, Yes, true. It's also good that electronics manufacturers are paying more attention to their recycling programs, which also makes it easier for consumers, not only businesses. -Susan
Reply  |  Post Message  |  Messages List  |  Start a Board

Jagibbons, not really. I was talking about 3D printed electronics using a new method that uses graphene based inks. I interviewed the researcher behind the new method for an article. It has not been published yet, so I have no link to send you. -Susan
Reply  |  Post Message  |  Messages List  |  Start a Board

It's all part of a cycle, Jagibbons. Now you can get printed electronics that are very cheap. Recycling electronics is a problem today, and it will become worse. Fast and cheap manufacturing is what you mostly get today, right? But this is not only In electronics. It's a general tendency In other industries as well. -Susan
Reply  |  Post Message  |  Messages List  |  Start a Board

One of the things I have always been grateful of is cloud storage. Yes, In computers or in closet storage space you always want more, and more is never enough. -Susan
Reply  |  Post Message  |  Messages List  |  Start a Board
InformationWeek Is Getting an Upgrade!