Before you charge into the Internet of Things, focus on these policy and infrastructure considerations.

Despite its gold rush vibe, the Internet of Things is still in its formative stage -- a lawless frontier where IT must think strategically to protect future company interests. Here are three things you can do now to stake a claim as the IoT unfolds:

1. Realize data governance is more important than ever. There are already a lot of voices clamoring for control of your data. Governments and policymakers are going to have their say and swing their weight. As you embark on your IoT journey, it is vital that you document and establish clear policies and procedures around the data your company interacts with and owns. Access control, analytics, retention, and backup policies need to be clear, and these areas must be managed from early on. While some starting points can be put in place today, others will require monitoring and adaptation as you progress. Here are a few examples:

The need to monitor and understand the constraints, standards, and scope of the Internet of Things as it unfolds on a global basis. This includes contemplating naming conventions (such as the Object Naming Service, a derivative of DNS providing structure to the IoT), related security provisions, industry and geopolitical operational guidelines, and legal restrictions.

[For more insight on IoT, see When Internet Of Things Meets Big Data.]

Keep an eye on who is trying to influence standards and what that might mean to your organization. Precursor technologies, like RFID and closed-loop, silo-based sensor monitoring systems, provide lessons. How did those technologies shape your business, and how will that translate into the governance of IoT?

Does the governing body (or bodies) operate centrally, or will there be local controls? Who and what will be the authority for international control? Some have suggested that organizations like the World Trade Organization or the Organization for Economic Co-Operation and Development could be likely candidates for this role. Keep a close eye on the extent to which state laws, international laws, or industry self-regulation could shape the constraints under which you will have to operate. 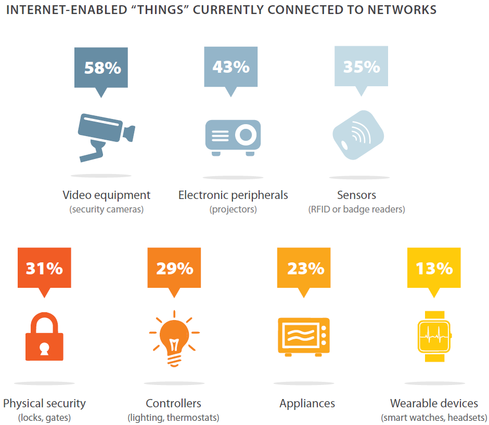 2. Make an adaptable infrastructure for changing times. We're entering a technology refresh cycle where many infrastructure, software, and application developers are keen on getting into the IoT ecosystem. It is important to make smart long-term decisions when committing resources -- especially with IoT, as so much is still to be determined. Favor technologies that can tap into your existing infrastructure but that are open and standards-based so they can work with tomorrow's innovations as the IoT matures and new business and data models emerge.

Pay attention to who is "winning" the standards wars. Look not only to specs relating to APIs and data access but those governing wireless and related power considerations (Zigbee, BLE, 6LoWPAN), device hardware considerations, operating systems, and data storage and structures. It's also critical to watch the mega-vendor-backed industry consortiums such as Open Interconnect Consortium (Intel), Thread (Google), and AllJoyn (Qualcomm), as well as the Industrial Internet Consortium. Don't forget about Apple and its ability to singlehandedly create a sea change, at least in certain aspects of the market.

3. Understand the process controls behind the architecture. Security is a big part of the IoT equation and should be baked into your architecture from the outset, as should processes for data retention and ownership. Pay attention to how updates are administered, access is granted, and network interactions are managed. Documentation is key to ensure adherence to policies, and for forensics in the future.

The Internet of Things will become reality. From consumers to the largest organizations in the world, I find it difficult to imagine any company remaining untouched. While it will happen fast, it may not be as fast as some think, and certainly it will not be easy.

It's one thing to understand the various components that comprise emerging standards and have a grasp of the legal considerations around how and where you implement your systems. It's quite another to consider the real-life operational discipline that goes into making it a reality. Think about having a data center and 1,000 network-connected PCs to manage. A full-fledged IoT deployment means you're suddenly dealing with several data centers, which may or may not include third-party-operated public or private clouds, hundreds of thousands of PCs and mobile devices, and billions of sensors and collection points.

This represents a quantum leap in scale where each very tactical consideration of establishing and maintaining the technology stack, from chips to OS to networking, will become a strategic make or break decision. Let's not repeat past mistakes.

Don DeLoach is CEO and president of Infobright. He has more than 25 years of software industry experience, with demonstrated success building software companies and extensive sales, marketing, and international experience. Prior to Infobright he was CEO of Aleri, the complex ... View Full Bio
We welcome your comments on this topic on our social media channels, or [contact us directly] with questions about the site.
Comment  |
Email This  |
Print  |
RSS
More Insights
Webcasts
Strategies for Success with Digital Transformation
Making Cybersecurity Work in Small and Medium-Sized Businesses
More Webcasts
White Papers
Passwordless: The Future of Authentication
Presenting Your Cloud Security Strategy to the Board
More White Papers
Reports
Building an Effective Cybersecurity Incident Response Team
Special Report: Understanding Your Cyber Attackers
More Reports

There will be massive opportunities for all and sundry emanating from the development and convergence of data, processes and the myriad of things on the Internet. What most people don't know is that the I0T is awash with the same disruptions (and possibilities) as were experienced when the Internet came to the hitherto much adored analog age.
Reply  |  Post Message  |  Messages List  |  Start a Board

Absolutely. As a baker, I know that the amount of flour needed for a cake can fluctuate by season based on humidity. Even weight isn't always accurate. A mixer could, in theory, flash a message that based on humidity over the past few days I should use less flour. It would also be quite handy to have a scale built in to the mixer that could connect to the recipe in the cloud to tell me what to add in which order, even show a photo of how the batter should look at each stage.

One thing you learn in this business: Never say never.
Reply  |  Post Message  |  Messages List  |  Start a Board

Given who was polled, its possible that there were 17 internet enabled refrigerators and coffeemakers out of 74 total to get the appliance number. Can't really see much else in a corporate environment, today. Not an interesting total number of units, but sure looks dramatic as a percent.

As far as not being able to predict the utility of an internet-connected mixer, etc. beforehand: that's the whole point of IoT. We can't possibly know what will stick and what won't at this point. Not anymore than we could predict what accessories would stick to the iPhone prior to its wide market acceptance. It's clear that, to a manufacturer, there is a revenue-at-higher-margin opportunity to the first mover *if*, for example, the need for connectivity with a mixer becomes a market winner.
Reply  |  Post Message  |  Messages List  |  Start a Board

Agreed, "appliances" is pretty broad. Logically I'd say the major appliances -- washer/dryer, fridge, stove -- and perhaps coffeemakers. Not sure the point of internet-enabling a stand mixer or food procesor :-D
Reply  |  Post Message  |  Messages List  |  Start a Board

Thanks. Great report, BTW. Looks like it's just devices at the surveyed sites. Unclear what they mean by appliances, or how much this generalizes to the general world beyond.
Reply  |  Post Message  |  Messages List  |  Start a Board

The source is a SpiceWorks report. Unfortunately, because of spam, I cannot link, but here is the URL that you can cut 'n paste

In a nutshell, they "asked 440 IT pros in North America and EMEA to share the current state of their infrastructure as well as their thoughts on IoT, its effects thus far, and how they're prepping for the coming onslaught of miscellaneous devices aimed at their networks."

Spiceworks has less of a horse in the IoT race than, say, Cisco, so I found this report worthwhile.
Reply  |  Post Message  |  Messages List  |  Start a Board

Thanks for following up on this.

Well, the first question is where did the numbers come from? There is no source listed.

Second, are they percent by item (e.g., how many *models/kinds/brands* would be in the list on a search of Amazon), or by quantity (e.g., total number of units installed in the world).

Third are they just what is being offered for sale now, or everything that has ever been installed and is still running today?

Fourth, what are the definitions of the categories? (e.g., does thermostat really only mean programmable thermostat, or does it include every bimetal and mercury switch round and rectangular one as well? Does appliance mean 23% of every mixer, food processor, blender, juicer, vacuum cleaner, refrigerator, freezer, toaster, washer, dryer, dishwasher, range, oven, microwave, crock pot, etc.?)

Finally, does "currently connected" really mean they have an active IP address, or just that they are network capable and may, or may not be actually connected to the internet?

Hi, I edited this column and chose the graphic as a matter of interest, to illustrate the variety of items comprising the IoT. The percentages are relative to the entire category ecosystem. So if you have 100% of all existing wearables, 13% of that 100% are IoT enabled.

What exactly do you find unbelievable about that breakdown?
Reply  |  Post Message  |  Messages List  |  Start a Board

There are numbers here that are glaringly wrong. Not sure why one would put their faith in these numbers under such circumstances. IMHO, we should wait for the definitions, methodology and source to be explained first. If there are obviously apparent erros in the numbers one knows about, how can one trust the numbers one isn't as familiar with? If you see a cochroach in a restaurant, you don't go, "Huh. There's a cochroach." Your first conclusion is, "This place is infested."

I think we all just want to understand these data. At that point, and only at that point, do they become useful.
Reply  |  Post Message  |  Messages List  |  Start a Board

I think these numbers are the result of analysis of the patterns of information and marketing flows. These numbers may not be correct but under a system where many factors are considered (or will be considered) these numbers come close.
Reply  |  Post Message  |  Messages List  |  Start a Board
Page 1 / 2   >   >>
Editors' Choice
Hot Topics