New API promises to cut down on the annoyance factor of proving to websites we're human.

When we talk about robots taking over, we tend to think of science fiction scenarios of gleaming cyborgs wiping out mankind with high-powered weapons. But there is a very real battle going on today where robots are constantly working against the interests of businesses and individuals.

These robots of destruction are actually easy to find. Just look at the comments section of some of your favorite blogs, or notice how the online channels quickly fill up when you try to buy tickets for a major event. The enemy here are bots that are trying to spread comment spam, access e-commerce servers, and generally make life miserable for people who do business online.

For a while now, the main weapon against these bots has been CAPTCHA, also known as everyone's least favorite thing that websites constantly ask them to do. While opinions differ about nearly everything on the web, one area where most can agree is that everyone hates trying to decipher a nearly illegible series of characters in order to make a comment, purchase a ticket, or do nearly anything online. "Is that an l or a 1? Is that c lowercase or uppercase?" To make things even worse, your customers are enduring these headaches for no good reason, as many bots can easily defeat classic CAPTCHAs.

However, this week, Google announced a new system designed to replace classic CAPTCHA with something a little more user friendly. Called No CAPTCHA reCAPTCHA, the new Google system replaces those hard to read text boxes with one simple question: "Are you a robot?" Click "No" and you're good to go. 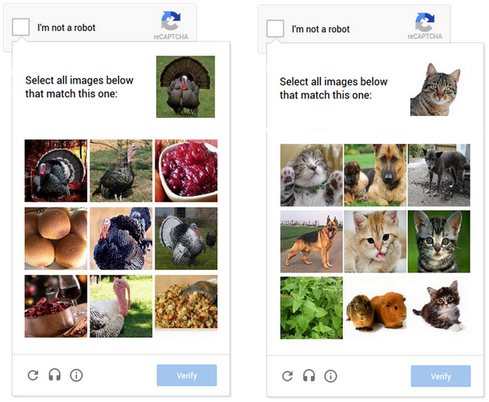 Of course, it's more complicated on the backend. After all, if that was all there was to it, then No CAPTCHA reCAPTCHA would be trivially easy for bots to defeat. What makes this new system potentially effective is its implementation of risk analysis. That's because, while in a single moment it can be hard to tell a person from a robot online, over time people and robots behave very differently, and these patterns can be very easy to detect. So an entity that's been rapid-fire hitting many sites and logging in with the same comment on Louboutin shoes may be a robot. If you've been casually browsing the web, reading articles, checking mail, and mooning over those shoes, there's a good chance you're a human (or a "meatbag" as Bender on Futurama would say).

But what if you've just logged in and there's no history to scan? Or if the system isn't really sure? Then it can implement an improved alternative to classic CAPTCHA texts. For example, the site can show a picture of a cat, followed by a set of other pictures and ask you to select the ones that don't fit. Still annoying, but hopefully less so than traditional text CAPTCHAs.

How soon will we see this new scheme? Many major sites, including Wordpress, already use the new Google API. According to Google's Security blog, early adopters are seeing good majorities of their traffic being able to be quickly identified as not robots. And since this is a Google API, I expect other sites to implement it quickly.

But will it work? Only time will tell. The makers of these annoying robots won't give up easily. They'll work on ways to defeat risk scans and try to fool reCAPTCHA into thinking they are humans.

However, fooling this system won't be easy and until then, while the bots aren't quite terminated yet, they are definitely poised to take a beating.

Jim Rapoza is Senior Research Analyst at the Aberdeen Group and Editorial Director for Tech Pro Essentials. For over 20 years he has been using, testing, and writing about the newest technologies in software, enterprise hardware, and the Internet. He previously served as the ... View Full Bio
We welcome your comments on this topic on our social media channels, or [contact us directly] with questions about the site.
Comment  |
Email This  |
Print  |
RSS
More Insights
Webcasts
People Are The Most Important Part of Autonomous SOC
Nip Ransomware in the FUD: Detecting Attacks Pre-Encryption
More Webcasts
White Papers
Gartner Market Guide for Insider Risk Management Solutions
Tech Insights: Detecting and Preventing Insider Data Leaks
More White Papers
Reports
Intelligent Outcomes Are Key to Business Resilience
How IT Security Organizations are Attacking the Cybersecurity Problem
More Reports

Recaptcha can be easily broken by bots by solving the puzzle manually/using OCR and then copying the cookies in the bot program to continue scraping. More details on how recaptcha is being broken can be found in our recent blog post in ShieldSquare Website
Reply  |  Post Message  |  Messages List  |  Start a Board

Tools used by sentiment analysis should be combined with plagiarism checking software to determine whether an account is a real human or just a bot spamming.

Until, such sophisticated tools are developed, it is better to have pictures rather than, text input that is hard and time consuming to bypass by human users.
Reply  |  Post Message  |  Messages List  |  Start a Board

>But will it work? Only time will tell.

It will work for a time. But given enough time, a computer can be taught to defeat the system.
Reply  |  Post Message  |  Messages List  |  Start a Board

As a user, CAPTCHA is annoying. As a provider of online services to customers who were born into the internet age, CAPTCHA is almost a deal-killer. A better alternative that won't tick off my hundreds of thousands of my teenager users will be well-accepted.
Reply  |  Post Message  |  Messages List  |  Start a Board

I love that they are trying to fix the bigest issue with Captcha method of bot detection by making it not just easier on us meatbags by eliminating non-sensical words and number combinations, but also by streamlining it to images.  If this will make it harder for bots to bring down services or reduce the number of spam, I am all for it!
Reply  |  Post Message  |  Messages List  |  Start a Board
Editors' Choice
Hot Topics