Many CIOs think they are the digital leader of their enterprise. Unfortunately, not a lot of CEOs agree. That was one of the key pieces of data revealed during the first full day of the annual Gartner Symposium on Monday by Gartner fellow and senior vice president Dave Aron.

It's not all bad news for the CIO, though: That 15% level still left them as "first among equals," according to Aron, with a herd of other executive titles taking small pieces of the leadership mantle.

[Are the issues described in this story the reason IT Has A Reputation Problem?]

Aron's talk, based largely on results of Gartner's CIO survey presented in the report, "Flipping to Digital Leadership: The 2015 CIO Agenda," began with a reflection on the CIO's changing role. According to the survey results, 41% of CIOs now report to the CEO -- one of the highest percentages in survey history. A breakdown begins, though, when two different groups are asked about just what that reporting structure means. 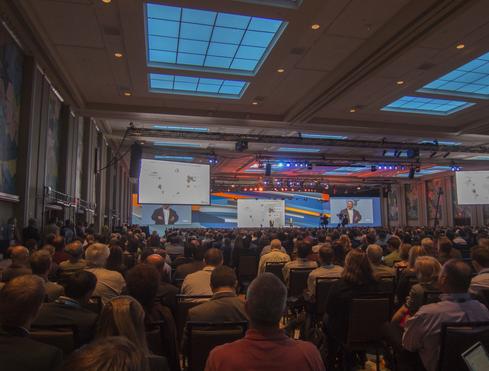 A capacity crowd listens to Gartner's Dave Aron describe steps CIOs must take to thrive in 2015.

What should CIOs do in order to take advantage of the leadership opportunity they've been given? Aron said that the CIO agenda for 2015 is wrapped around three "flips" that must take place.

Three CIO flips
The first flip is from legacy first to digital first. This is a continuation, in most respects, of the push to "digitalization" that Gartner emphasized in its last CIO survey, "Taming the Digital Dragon: The 2014 CIO Agenda." Aron said that there are several concrete steps CIOs should take toward a digital first strategy, including building a "Why not cloud?" step into planning for any new service or technology rollout.

Another action Aron recommended is "Maximize Contextualization," by which he means taking advantage of information now available on where your customers are and what they've recently done.

Another Gartner fellow and vice president, Richard Hunter, warned in Monday morning's keynote address that companies must never cross the "creepy line" into digital stalking. The balance between value and creepiness seems a topic likely to be revisited in this week's sessions.

The second flip Aron described takes on values leadership. The important change, according to Aron, is moving from respect for what's visible to respect for what's valuable. Since generations of business leaders have been taught that only that which can be measured matters, Aron suggested that CIOs develop new ways of measuring IT's contribution to the organization and better ways of describing those contributions.

As an example, he cited the common metric of IT cost as a percentage of overall revenue. This leads to the conclusion that the only way for IT to maximize its contribution is to minimize its cost. Aron suggested changing the metric to one expressed as corporate revenue supported by each dollar of IT spending. This way, investments in IT can have a measurable impact on the company's top line.

Finally, Aron said that CIOs must be able to flip their leadership style from one that emphasizes command and control to one that highlights vision and inspiration. This point reinforced one made in an earlier keynote address, where "digital humanism" was the term used to describe technology used to serve people at the center of an organization.

One of the problems CIOs face is that inspiring people and developing strategic vision requires time. Aron suggested that CIOs appoint an "IT COO" to be in charge of operational issues within the division. He pointed out that CIOs who had such a person on their team gained at least a day each month that they could use for other, more critical tasks.

The change in leadership is critical if a CIO is going to lead a change in IT culture, he said. The change in culture is critical if IT is going to respond to the changes facing businesses. Aron leaned on Peter Drucker for this action item, repeating Drucker's quote, "Culture eats strategy for breakfast." Digital is moving to center stage, Aron said. The big question is whether CIOs will lead the change or be left behind.

The Gartner Symposium and IT Expo formally began Sunday, Oct. 5, but the emotional launch of the event was Monday morning, when the conference's opening keynote address was followed by "The CIO Agenda for 2015," Aron's 45-minute session.

The session on the CIO agenda is typically one of the more popular Gartner Symposium themes. On Monday morning, it was standing-room only in a room set for more than 2,000.

Curtis Franklin Jr. is Senior Editor at Dark Reading. In this role he focuses on product and technology coverage for the publication. In addition he works on audio and video programming for Dark Reading and contributes to activities at Interop ITX, Black Hat, INsecurity, and ... View Full Bio
We welcome your comments on this topic on our social media channels, or [contact us directly] with questions about the site.
Comment  |
Email This  |
Print  |
RSS
More Insights
Webcasts
[Free Virtual Event] Using Microsoft in 2020 & Beyond
Building & Managing the Next-Gen SOC
More Webcasts
White Papers
Securing IT & OT in Industrial Environments
Ransomware Response Report: Trends & Outlook
More White Papers
Reports
State of Endpoint Security: How Enterprises Are Managing Endpoint Security Threats
Cyber AI: An Immune System for Email
More Reports

Have to agree with your Assessment here.

CIOs need to become more Humble(¬ forget what got them there in the first place).

If you don't or won't interact with your Team as well as your Consumers often enough you are setting yourself up for a big-big disaster down the line.

@Ashu001, "The other is actually sitting down with Consumers of your Services and figuring out what they are doing today inefficently /ineffectively and what they can do better today."

I wonder how often that is happening though.  I see two paths frequently used that don't quite fall into this model.  The first is the "I know best" model where systems and processes are built around how the CIO thinks everything should be done.  The second is closer to what I'd like to see but it misses a key component, I see executives sending someone out to gather information then making decisions based on what someone else collected.  They don't even talk to department heads themselves and I think that's a big problem.  If you want people to embrace the changes you're trying to make then you need to make it look like you're actually paying attention to what is going on.
Reply  |  Post Message  |  Messages List  |  Start a Board

Your points are well-taken here-

So, in your opinion what is it that the CEO is looking for?  I see a shift toward the CIO not just taking a project/problem and getting the job done and being more of a process and systems auditor who bring solutions to problems that the company might not realize they have.  In short staying ahead of the curve when it comes to the things that IT has been reactive to for so long.  Instead of waiting to hear "this process is killing us" then finding a solution the CIO should be going out to find those processes and propose solutions before it is dropped in his lap.

That is definitely one part of the CIOs remit today.The other is actually sitting down with Consumers of your Services and figuring out what they are doing today inefficently /ineffectively and what they can do better today.See what you can deliver to Consumers so that they can do their job better .


Then finally,its also keeping abreast of all the Latest Technology Developments(especially in fast moving fields like Security and Mobile) to ensure you remain at the Forefront of Knowledge and can deploy whatever makes sense for your company quickly and in real-time.

With all the talk about CMOs and and other dept. heads (not to mention the idea of new titles like CDO, etc.) taking the reigns on technology-focused projects, it's easy to see how CIOs may be running up against a bit of an identity crisis. Is it your job to lead the IT dept. in meeting business goals, or is it your job to be the ambassador of IT to the rest of the business, and let them decide how to use those resources, with you providing more of a supporting role. It's easy to say 'both', or 'it depends on your business', but neither of those really explains how to do that.

I think the smartest lesson comes back to this - 'digital' is no longer just  one facet of your business. No matter what, it touches every aspect of your business. That means that the difference between a CIO ten years ago and a CIO today is that he has a hand in everything. It's closer to a CFO-style position where he's in charge of managing a limited resource that everyone in the company needs. Would a CFO let marketing manage a bunch of money without his say? Maybe, but only after signing off on that budget and establishing some guidelines.
Reply  |  Post Message  |  Messages List  |  Start a Board

@Ashu001, "The Bottomline is that CIOs (who for  very longtime were caught up in their own world firefighting/Keeping the lights on) have no choice but to step up to Game and Deliver what CEOs expect from them."

So, in your opinion what is it that the CEO is looking for?  I see a shift toward the CIO not just taking a project/problem and getting the job done and being more of a process and systems auditor who bring solutions to problems that the company might not realize they have.  In short staying ahead of the curve when it comes to the things that IT has been reactive to for so long.  Instead of waiting to hear "this process is killing us" then finding a solution the CIO should be going out to find those processes and propose solutions before it is dropped in his lap.

Were you at the Gartner Symposium in person this time around?

If So,this is Awesome!

Lot of Techies criticize Gartner(&Forrester ,& IDC,& Aberdeen) because they give too much Management-focussed talk but I tend to like their Talks because it helps me frame the Discussion better when I speak with My Managers/CEOs.

The Bottomline is that CIOs (who for  very longtime were caught up in their own world firefighting/Keeping the lights on) have no choice but to step up to Game and Deliver what CEOs expect from them.

In other words-IT is no longer just a Cost-Centre but a Profit +Innovation Centre now.

Change is sweeping into Enterprise IT and we better we prepared for it!!!

More Informa Tech Live Events
The Threat From the Internet - and What Your Organization Can Do About ItDon't Miss this Dark Reading Virtual Event on Critical Data BreachesThinking Like an Attacker: Strategies for Defense