At Gartner Symposium, MIT's Erik Brynjolfsson praises tech advancements such as self-driving cars, but says the real challenge is to make the digital economy translate into wider prosperity.

The digital economy is often compared to a second industrial revolution, but there's a difference between the two -- and it's not all good for our economy or our society, MIT's Erik Brynjolfsson said in a kickoff keynote at Gartner Symposium in Orlando Sunday.

In particular, he sees the current wave of digital technologies as the most significant cause of widening income disparity -- now greater than it's ever been since before the Great Depression -- as more wealth is concentrated in the hands of those with access to education and capital. The poor are getting poorer, and even those in the middle are getting squeezed -- while superstars and the ultra-rich prosper like never before, he said.

Brynjolfsson, director of MIT Center for Digital Business, is an economist who specializes in the impact of technological change, and he recounted highlights from his recently published book The Second Machine Age, co-authored with Andrew McAfee (another MIT prognosticator whom social collaboration fans may remember as the prophet of Enterprise 2.0).

Digital goods are actually adding more to our economy than is recognized by traditional measures such as the gross domestic product -- for example, free apps don't show up in the GDP because there's no revenue associated with them. Yet the technology bundled into today's smartphones replaces dozens of once-expensive products that had to be purchased separately a few years ago -- computer, answering machine, GPS navigation system, and so on. Based on his research, free digital goods and services are adding roughly $300 billion to the economy. "They're not counted, but we're still getting value from them," he said. 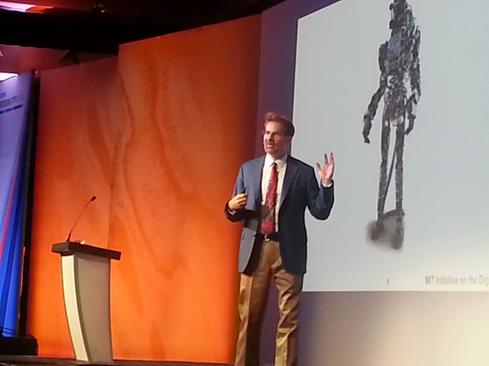 Yet there is no economic law that says the benefits of technological change must be evenly distributed. The rule of thumb has long been "a rising tide lifts all boats," and that seemed to hold true for a long time. For decades, even high school dropouts saw their wages rise steadily, keeping pace with the economy as a whole. Now, high school dropouts have less income in real dollars today than they did in the 1970s (and also lower life expectancy!), while more educated people, particularly with graduate degrees, are drawing farther ahead. Even among those with more education, there's a widening gap between a few superstars and everyone else.

[Will consumers be able to afford the latest digital toys? Read Google Glass And Consumers: Nothing To See Here.]

Those with just enough training to do repetitive administrative jobs have also been feeling the pinch, since repetitive mental work is more easily replaced by automation. Those whose jobs require more creativity have been better insulated so far. Yet even professions such as journalism are being impacted as computers learn to compose routine news stories based on sports box scores or company financial reports. Some lower status jobs such as hairdresser have held their earning power relatively well because machines so far lack the manual dexterity to perform their tasks.

While liberal economists tend to blame income inequality on tax and regulatory policy, Brynjolfsson said his research shows those are relatively small factors compared with technological change. Even in nations with much more left wing or right wing governments, the pattern of economic change is very similar, he said.

The economic impact of machines revolves around two factors, power and control, that are playing out differently in the current technological era than in the original industrial revolution, Brynjolfsson said. What's changed is the shift from machines that deliver physical power to machines that deliver mental power.

The steam engine produced physical power that in some applications replaced the manual efforts of humans, but the engine still required an engineer -- human control over that power. As long as the machines we created were delivering physical power, the disruptions of technological change tended to deliver clear, broad-based benefits. The horseshoe maker might lose work following the introduction of the automobile, but overall the economic impact was a clear positive. Physical power was complementary to human effort.

With the mental power delivered by increasingly smart machines, it's no longer as clear whether technology is a complement or a replacement for human effort. For example, the Baxter robot from Rethink Robotics can learn by example how to perform assembly tasks in a factory -- beginning to eliminate some of the control, supervisory, and even computer programming tasks that remained after previous generations of robots started finding their way into factories. The IBM Watson cognitive computing system soon will likely rival and begin to surpass human doctors at the task of medical diagnosis, he suggested.

Sticking with that example, Brynjolfsson noted that when the Watson computer was first being trained for the challenge that made it famous -- winning on Jeopardy against the game's human champions -- it only got the right answer 50% of the time, far below the performance of the best human contestants. However, the secret of Watson's success was "its ability to learn at a phenomenal rate," he said. The systems designers incrementally but steadily improved Watson's accuracy so that by game time the computer not only won but "crushed" human champion Ken Jennings and scored more points than the other two contestants combined.

Before Watson, IBM made news by pitting its Deep Blue supercomputer against chess grand master Garry Kasparov and winning. Today, the computer inside your smartphone is capable of beating the best human, Brynjolfsson said, adding that one current grand master who was asked what strategy he would use against such an opponent responded by saying, "I would bring a hammer."

Smashing technology is not the answer, but better answers are needed, Brynjolfsson said. Regulatory and tax policy changes might be part of the answer -- for example, increasing the earned income tax credit to spread some of the benefits to the working poor -- but technology and business leaders also need to be thinking about how to increase the positive impacts of innovation, he said. "Ultimately, I tend to be optimistic that we will be able to do it. Our ancestors were able to do it in the first machine age with mass education and a new tax code."

We need to figure out what the equivalent changes will be for the second machine age, he said.

David F. Carr oversees InformationWeek's coverage of government and healthcare IT. He previously led coverage of social business and education technologies and continues to contribute in those areas. He is the editor of Social Collaboration for Dummies (Wiley, Oct. 2013) and ... View Full Bio
We welcome your comments on this topic on our social media channels, or [contact us directly] with questions about the site.
Comment  |
Email This  |
Print  |
RSS
More Insights
Webcasts
Protecting Your Enterprise's Intellectual Property
ROI and Beyond for the Cloud
More Webcasts
White Papers
Passwordless: The Future of Authentication
All In, Online Gaming & Gambling
More White Papers
Reports
Assessing Cybersecurity Risk in Todays Enterprises
2021 Top Enterprise IT Trends
More Reports

I think technology has created more disparity.  I know many people who can't find work and have to work 2 jobs in order to make a decent living.  I think there needs to be policies to help retrain great parts of our population so they can take advantage of these advancements.  Otherwise, we will have the same problem as San Francisco, all the tech employees making huge amounts of money, while others continue to work making the minimum wage.
Reply  |  Post Message  |  Messages List  |  Start a Board

>I'd guess only a handful of people who use Alibaba, Etsy and similar sites become stinky, filthy rich -- but is that really what many seek?

But how many people really use those sites to generate a living wage? And in doing so, can they stil afford medical coverage? I suspect the supplementary income people generate from these sites masks broad financial insecurity.
Reply  |  Post Message  |  Messages List  |  Start a Board

Great point Alison -- not everyone wants to be a filthy rich Silicon Valley startup CEO working 70 hour weeks. Most would settle for a secure home, enough wholesome food for their families, healthcare, some leisure time, and knowing they can educate their children to be self-sufficient. The question will be, can civil institutions harness technology to deliver what one might call an MVL (minimu viable lifestyle) to citizens? I admit to having grave doubts,
Reply  |  Post Message  |  Messages List  |  Start a Board

That sounds good in many ways, but what about sites like Alibaba and Etsy that return self-control and autonomy to the hands of individuals? Sure, I'd guess only a handful of people who use Alibaba, Etsy and similar sites become stinky, filthy rich -- but is that really what many seek? Looking at videos and articles about the many people (often women) who now support their families by making crafts, clothing, artwork, and other products they sell online is very uplifting and inspiring. A whole economy in China alone blossoms because of Alibaba, a world that has nothing to do with tech other than the underlying infrastructure used to sell/pay.

So yes: Digital businesses can create income disparity in that a young white man is more likely to successfully create a Silicon Valley startup. But anyone, anywhere has the chance to use his startup's technology to support her family and create a career she enjoys.
Reply  |  Post Message  |  Messages List  |  Start a Board
Editors' Choice
Hot Topics