Last year's partnership with Apple is beginning to bear fruit.

7 Emerging Technologies IT Should Study Now
(Click image for larger view and slideshow.)

The IBM MobileFirst for iOS apps, available now, include: Passenger Care, which helps airline customer service agents address the needs of travelers from an iPad or iPhone; Advisor Alerts, an app designed to help financial professionals coordinate client-related tasks and communication while on the move; and Dynamic Buy, an app that provides retailers with real-time data to help understand how products are performing and guide future buying decisions.

"This is really about changing the way people work," said Heidi Fillmore, IBM global industry partner in travel and transportation, in a phone interview.

IBM's apps are the product of a partnership with Apple that the two companies announced last year. At the time, IBM CEO Ginni Rometty described the partnership as a way to bring the company's expertise in analytics, cloud services, and software to mobile devices. (IBM MobileFirst for iOS is distinct from the company's platform-agnostic MobileFirst program.)

For Apple, the deal turns IBM, with its many thousands of salespeople, consultants, and developers, into a seller of Apple devices to businesses. Prior to the advent of the iPhone and iPad, Apple had a hard time convincing businesses to look beyond Windows for their computing needs. Today things are different -- iOS is the Windows of the mobile world, as the default choice in enterprise adoption. According to Good Technology's Q4 2014 Mobility Index Report, the number of iOS activations among the firm's 6,200 corporate clients reached 73%, up from 69% in Q3, while Android activations fell to 25%, down from 29%.

Fillmore described how IBM also is working with a number of airlines to integrate IBM's apps into their backend systems. Among airlines that have modernized their IT infrastructure, integration is fairly straightforward, she said, but many airlines, due to years of thin margins, still rely on legacy systems. In the next three months or so, passengers should start seeing IBM's apps in action, she said. 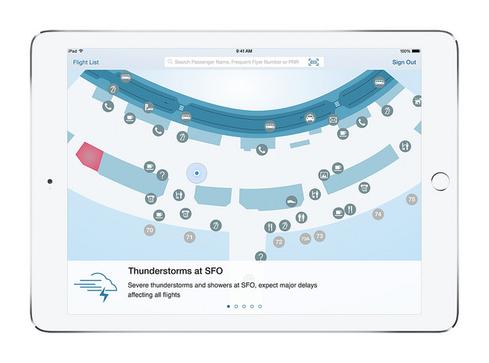 The first iOS app IBM developed for the airline industry, Plan Flight, helps pilots decide how much extra fuel to carry on a flight, based on real-time analytics. "It addresses a real niche in the marketplace that no one else addresses," said Fillmore.

The Passenger+ app allows crew members to rebook passengers onto different flights in mid-air, to help resolve travel interruptions. The new Passenger Care app allows customer service agents to assist travelers while on the move, thereby reducing crowds at service counters and allowing airlines to be more responsive to customer needs throughout airports.

Fillmore said IBM is working on ways to allow flight attendants to conduct commerce more efficiently in the cabin, selling seat upgrades and other services. Many airlines rely on in-cabin payment platforms linked to their catering providers and now want their own mobile payment platform to sell seat inventory, she said.

IBM has conducted workshops with a number of airlines to explore potential services. One major US carrier brought its flight attendants together to brainstorm about how to improve the inflight experience. "The excitement from the end-users, the flight attendants, was incredible," said Fillmore. "The general theme was to help make business processes better. And that's what this is all about."

Thomas Claburn has been writing about business and technology since 1996, for publications such as New Architect, PC Computing, InformationWeek, Salon, Wired, and Ziff Davis Smart Business. Before that, he worked in film and television, having earned a not particularly useful ... View Full Bio
We welcome your comments on this topic on our social media channels, or [contact us directly] with questions about the site.
Comment  |
Email This  |
Print  |
RSS
More Insights
Webcasts
Protecting Your Enterprise's Intellectual Property
5 Steps to Solving Modern Scalability Problems
More Webcasts
White Papers
The 2020 Duo Security Trusted Access Report
Ahead of the Curve: Accelerate Cyber Response with DNS Insights
More White Papers
Reports
The ROI Of SD-WAN: Not Just A Numbers Game
The Future of Multi-Cloud Networking 2020
More Reports

This is interesting to me because I don't really think of IBM as an "app" builder but more of a system builder.  I'm assuming that this is much more than just an app and that a large part of this is the back end systems that make the app possible.  That makes me wonder if this is a chicken and egg scenario, do they already have airlines that they have built systems for and now they are offering an iOS app or are they offering the iOS app as a sales pitch to airlines that they want to build systems for?
Reply  |  Post Message  |  Messages List  |  Start a Board
Editors' Choice
Hot Topics