Tech And Tasers: IT Support In Washington's Prison System - InformationWeek

The 185 IT professionals at the Washington Department of Corrections support the needs of approximately 8,000 corrections officers and staffers and track some 33,000 assets -- including everything from iPhones to Tasers. Here's the story of how the organization revamped its IT support and service management tools and processes -- and the surprising culture changes that came about as a result.

Most enterprise IT professionals probably don't count Tasers among the assets they have to track.

Running IT operations for the Washington Department of Corrections (WADOC) is, in most ways, like running IT in any large enterprise. You have to support a dispersed workforce, manage a wide range of apps, and keep track of a constantly shifting ecosystem of assets.

Then there are key differences, like those Tasers. "Some things are unique to our customers," said Michelle Greene, systems and applications supervisor for the Washington Department of Corrections (WADOC), in an interview with InformationWeek.

[ What are you doing to keep your best people? Read How To Retain Top IT Talent. ]

The 185 members of WADOC's IT organization support the needs of approximately 8,000 corrections officers, staffers, contractors, and volunteers who work with a population of nearly 16,000 people. WADOC is a state prison system operating 12 major facilities as well as 10-15 smaller locations, including work-release sites, community field offices, and community justice centers.

There are 122 applications in use across the enterprise and approximately 33,000 assets to track. These include typical office gear such as laptops, phones, and printers, as well as medical devices used by the department's health services professionals, video surveillance gear, GPS devices, and protective equipment such as Tasers.

In 2013, WADOC decided it was time to modernize its IT service management experience. The system in place at the time enabled users to report issues to IT, but offered little else, according to Greene. "That system had long processes to do asset management, it had nothing in regards to service management," she said.

"We piecemealed together a bit of an asset inventory control process, but realized very quickly we didn't know what was out there in terms of assets in our infrastructure at any given point in time."

Service requests were coming in via email or calls to a helpdesk. Users had no self-service options. Software, hardware, and service catalogs were all stored on Excel spreadsheets or on paper. There was no workflow automation, so IT personnel were spending an inordinate amount of time each day trying to find the right next step for each support and service call. There was a lot to address in order to improve service for users -- and improve the typical workday for the organization's IT professionals.

"Within our support structure, we have a hybrid of a centralized and decentralized layout," said Greene. The majority of IT team members are centralized at WADOC headquarters in Tumwater, Wash., handling enterprise applications support, the data center, domain services, and voice services.

"Anything that can be centralized is at headquarters," said Greene. In addition, each major facility has its own local IT team to help with desktop support and any other hands-on needs.

The process of finding a new IT support system capable of improving existing service and workflow, with room to introduce additional functionality such as asset tracking, began with the WADOC's technical review board. The board -- which is made up of stakeholders from across the department of corrections -- identified key business goals around IT performance and data collection. "By identifying their needs, we were able to develop a great RFP," said Greene.

The next step was a review of vendors holding a master contract with the state of Washington. In the public sector, master contracts are granted to preapproved vendors. Washington state law requires agencies to work with vendors that have been granted master contracts, unless there's a reason why they can't, explained Greene.

In this case, an existing master contract with EasyVista made the vendor selection process that much easier, said Greene. The IT service and support management vendor offered tools to help with incident management, change management, asset management, and configuration management, among other applications. 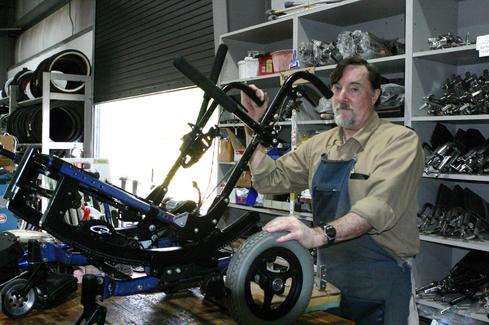 Bree Forbish, an inmate at Stafford Creek Corrections Center, restores wheelchairs as part of the "Wheels for the World" program that ships restored wheelchairs to people with disabilities in developing countries.

Incident management and service management were the first EasyVista tools to be deployed, and that was done over a period of about six to twelve months. "That year was a bit bumpy," said Greene. It was the first time WADOC's users were ever exposed to IT self-service options. "When they were introduced to a new system to [let them] click on 'report an incident' or click on 'service catalog' they almost didn't know what do with themselves."

The law of unintended consequences revealed itself at this point. "The original objective was to get IT trained, since they were bigger backend users," said Greene. "We did make mistake in thinking end users didn't need training, that it would be intuitive for them. We made the home page extremely basic, plain-talked it, [and] used a basic user interface."

All to no avail. Users were so fearful of the new system and unsure of how to use it, they were unwilling even to report an incident to IT. "What we didn't anticipate was that individuals would altogether stop interacting with IT," said Greene.

At WADOC, IT users include general office workers seated at a desk or in a cubicle, as well as individuals working within the prison structures who need support for video equipment or phone lines.

"We'll get calls from superintendent or sergeant on the line saying their video cameras are down in Tier 2 and they have no visibility," said Greene. "If a phone goes down and that's the only way for an officer to call another office who is isolated," that's something that requires a rapid response from IT.

WADOC IT has service-level agreements (SLAs) on some apps and services that require a two-hour turnaround for a solution. "This requires us to also have a 24x7 shop. We have set up an architecture of support that allows customers to contact IT thru 800 number that directs them to a duty officer on call seven days straight. We would expect the duty officer to respond within a 15-minute turnaround."

Even though the majority of these types of calls involve nothing more than password resets, "We still treat it like an emergency, so the customer knows they're important," said Greene.

After the self-service rollout, it became clear most employees didn't really understand what IT was all about, said Greene. This led to a proactive effort to engage and communicate with users. "Anytime we roll out anything facing customers, we use a customer focus group that meets on a quarterly basis," said Greene.

"This group is a hand selection of customers from all shapes and sizes of the department. We show them the change, talk through the issues their groups will encounter, sometimes we end up tabling changes [based on their feedback]. Using that group, IT has successfully supported three major changes in the last year."

Change Isn't Easy for Anyone

Users weren't the only ones grappling with culture change. EasyVista is designed to allow IT organizations to automate the workflow for an incident, a service request, or any other type of problem. "Our staff weren't used to a system that did the process for them," said Greene.

"They were used to hand-carrying to the next stage. They were like 'what do I do now?' To a certain degree, they said, 'That was half of my day, running around asking, "What next?" [or finding out] who do I hand this to, or trying to jam work into someone else's process.'"

So what is the team doing with all this extra time? "Here's where documentation comes in, here's where continuous improvement comes in," said Greene. "Most IT shops experience an inability to document everything you do and keep that documentation up to date. We have more time now, and we have the ability to say, 'What next can we automate?'"

"Due to the layout of the prisons, most of the time where we go into contract with a [medical equipment] vendor, the vendor has to tell us how to fix it," said Greene. That's because background checks and calendar dates are required for anyone entering the prison to perform work. "They can't just show up on a help call," said Greene. "We'll tell them we want to be tier-one support."

With customers now comfortable with the service management tools, the next step for Greene's team is to implement service apps. "It's time now for us to be ahead of curve instead of behind it," said Greene. A mobile ramp-up is also underway, starting with IT workers involved in critical support roles and officers in the field who carry iPhones or iPads.

Over the years, the IT service system has been redesigned a few times to accurately reflect the needs of users, as well as the language employees use.

"A few years ago our customers would feel pretty accomplished to just ask for a keyboard," said Greene. "Now, they are able to ask for a specific software download, [they're] confident in narrowing down app incident [options], and there are clear pictures that allow them to visually identify what they're in need of assistance for."