0%
Tweet
Search and online ad rivals Yahoo and Google might be coming closer together, as Yahoo decides to test whether it should let the search engine giant onto its turf.

One of Google's biggest rivals – Yahoo – has confirmed that it is running tests to see if it should use Google's search results on its websites, something that it previously limited to Microsoft's Bing search engine.

The testing follows a renegotiation in April of the contract between Microsoft and Yahoo, which allows 49% of Yahoo ads to come from other ad firms, such as Google.

The terms of the renegotiation included amendments in two core areas, which gave Yahoo increased flexibility to enhance the search experience on any platform, since the partnership is non-exclusive for both desktop and mobile.

Yahoo will continue to serve Bing ads and search results for a majority (51%) of its desktop search traffic, but Microsoft became the exclusive agent for ads delivered by the company's Bing Ads platform, though Yahoo continues to be the exclusive provider for its native Gemini ads platform.

"As we work to create the absolute best experiences for Yahoo users, from time to time, we run small tests with a variety of partners including search providers," a Yahoo spokesperson confirmed to the blog Search Engine Land. "There is nothing further to share at this time." 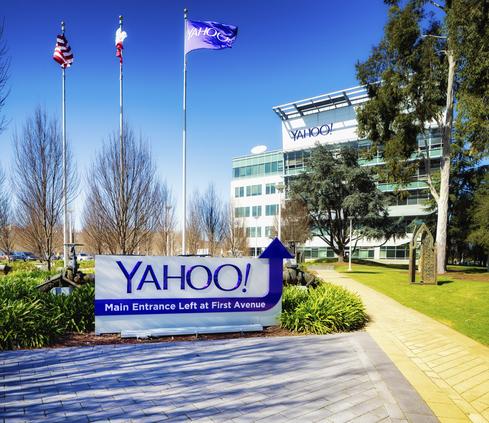 In June, Yahoo announced the availability of independent viewability and fraud measurement for display and video advertising on Yahoo owned and operated properties, as well as media purchased across its programmatic buying platform.

A recent report from eMarketer forecast that Microsoft and Yahoo combined would own 6.5% of the $81 billion search market globally in 2015, while Google, the search leader, was expected to take a 54.5% of the global market this year.

Digital ad spending worldwide is expected to hit more than $170 billion this year, according to the report, with search ads accounting for $81.59 billion worldwide, an increase of 16.2% over 2014.

[Read more about the fight between Google and Yelp.]

The report also projected that by 2019, search ad spending will reach more than $130 billion globally, still growing at nearly 10% year-over-year.

A June report from Kantar Media found ad spending for paid search, which reflects text ads on the Google and Bing search engines, rose 7% in the first quarter of 2015, with automotive, financial service, media, and retail advertisers leading the way.

However, expenditures for online display, which is based upon desktop display ads only, and excludes video and mobile ad formats, declined 8.7% compared with last year.

The report noted that the main factors contributing to the decline were lower cost per thousand impressions (CPMs) and reduced page traffic, with the latter likely being attributable to mobile devices siphoning some desktop usage.

Nathan Eddy is a freelance writer for InformationWeek. He has written for Popular Mechanics, Sales & Marketing Management Magazine, FierceMarkets, and CRN, among others. In 2012 he made his first documentary film, The Absent Column. He currently lives in Berlin. View Full Bio
We welcome your comments on this topic on our social media channels, or [contact us directly] with questions about the site.
Comment  |
Email This  |
Print  |
RSS
More Insights
Webcasts
Shaking Off Security Alert Fatigue: Tips for Taking Control
Shifting Security from Speedbump to Digital Accelerator
More Webcasts
White Papers
Let's Talk: Why Language Matters in Cybersecurity
6 Emerging Cyber Threats That Enterprises Face in 2020
More White Papers
Reports
Apex Report: Global Cyber Infection
2019 State of Privileged Access Management (PAM) Maturity Report
More Reports

1)We have lost value/appreciation for Hard-work &

2) We have become a short-termist Society.

Both these values filter from Top to Bottom in America today so its no surprise to see corporate America as well as Wall Street see Value in this qualities only currently(as in the case of Yahoo).

Here's some more information from SAT (via Bloomberg) which just re-states the Obvious.Our American Kids are getting dumber.In fact they are now the dumbest they have ever been in close to 4 Decades!!!If that does'nt scare well-meaning Americans nothing will-www.bloomberg.com/news/articles/2015-09-03/students-bombed-the-sat-this-year-in-four-charts

Think about it carefully,if one really believes that its the Youth/Student population of the Country who holds the keys to the future of our country;What Signal do these indicators give us?


This is precisely what you get form kids who are addicted to Candy-Crush and other silly,Brainless Games and TV-Shows on their smartphones 24/7.


They can't even write two sentences properly without resorting to useless Shortforms.

Ask any American kid to name the 5 Biggest(by size) Countries in the world and they will stutter and hem and haw.

Ask them what was Kim Kardarshian's Latest Dress color and Everybody will know! LOL!!!


"...Its very much a Winner takes all sceanario in the Tech Marketplace today."

@Ashu001  It sure is.  If you can just hang around long enough generating revenue is almost inevitable -  the backers of Yahoo realized this when they cut those large checks every month.


Downsizing without a thought, all the while responding "nothing personal, it just business."


@Ashu001   Well said and you absolutely correct.  Yahoo never said they wanted to be a respected source of information, they simply want to get as many eye-balls to the site as possible.  How do they achieve this ?

Appeal to what most Americans find interesting and unfortunately most of the time that is meaningless fluff.

If one looks at how many ordinary Americans are so enamoured with Kyle Jenner and the Kardashians and the rest of those clowns out there one realizes that Yahoo is on absolutely the right track(LOL!! I know the Horrors).

America has gotten so dumbed down today its beyond frightening currently.

As long as most Americans continue to believe in Dumbing themselves down further and further nothing(absolutely nothing) will change.

And Yahoo will continue to win many more competitive battles today.

@Ashu001       You are right. Yahoo is like a punch drunk fighter, just hanging on with the likes of Katie Couric and the rest propping it up until the winds of a fickle user base changes in their favor.

I am sure the numbers are showing some improvement and those who are funding this accident waiting to happen are pleased with the progress.

Yahoo is playing towards it's strengths which are mindless stories and fantasty sports - these are it's strengths and apparently research supports that their base enjoys this most.

As I am sure you also have realized the barriers to entry in this business are so low that anytime the incumbent stops performing well there is a new player sitting on the sidelines who is prepared to swoop in and take away the entire Market!

Its very much a Winner takes all sceanario in the Tech Marketplace today.

Whether we like it or not we operate in a pure marketplace in the Online Space currently.

The only signal that these mega-Software Corps listen to is the Voice of the Market(including stockmarket) and Customer Volumes.

I don't know whether you remember when Firefox first came on the scene and within 5-7 months took away close to 40% Market-share from IE 5 and IE 6(which back then was a badly neglected Browser from the Development point of view because it was a Monopoly).

That sudden and drastic Shift away from IE forced IE /Microsoft to up the Game considerably and that is what they did so much so that for a longtime after that,IE and Firefox were very much neck and neck in terms of Performance and Developement.

After that Google brought Chrome on the scene and stole market-share from both these Companies bigtime.

That's the kind of Competition I am talking about here.

That's the only way for these guys to listen.

Ultimately our Eyeballs(in the Millions) do count.

Ok in that case you should have absolutely no problem accessing and using TOR safely(given that it was entirely funded initially by the US Government).

You are absolutely right that its always good to have options to IE and Chrome.

I like Opera as well for its Lightweight and sleek structure as for a Purely Developer Point of View;I find Firefox the best(particularly since the Plugins they offer their are unbeatable anywhere else currently).

Since I have not yet experimented with DragonSharq personally I don't know whether or not to recommend it currently.