HP has finally pulled the trigger on a split first proposed in 2011. Here's why Meg Whitman's methodical approach makes sense.

HP Inc. and Hewlett-Packard Enterprise, the two companies created by splitting up today's tech behemoth, will still have mountains to climb, but HP's leadership has laid a solid, methodical plan to make the most of the company's assets.

The split of HP, announced Monday, is to be completed by the end of 2015, creating business-focused Hewlett-Packard Enterprise, in the infrastructure, software, and services business, and HP Inc., in the personal computing device and printing business.

The idea of splitting off the PC business was first proposed back in 2011 by brief-tenured CEO Leo Apotheker. But that hasty plan, bundled with the fateful move of getting out of the smartphone business and acquiring Autonomy Software for $10 billion, proved too much, too fast and was Apotheker's undoing.

Meg Whitman, who succeeded Apotheker in September 2011, has succeeded by managing expectations and methodically planning and rebuilding. She laid the groundwork for this move, even as she initially vowed that the company would remain "one HP."

"Today was made possible by our turnaround," said Whitman during a Monday morning conference call with financial analysts. "The work we have done in terms of fixing our balance sheet, improving our go-to-market sales, remaking our leadership, and igniting our innovation portfolios across both businesses has made this possible."

Whitman reminded analysts that HP was a mess three years ago and needed to rebuild "as one HP." The company is now "in a position of strength," she said, and by splitting into two Fortune-50 companies, each with approximately $57 billion in revenue, both companies could become "a lot more nimble, a lot more focused." This time around investors appear to be reacting favorably, with the stock up $1.70 in early trading Monday. 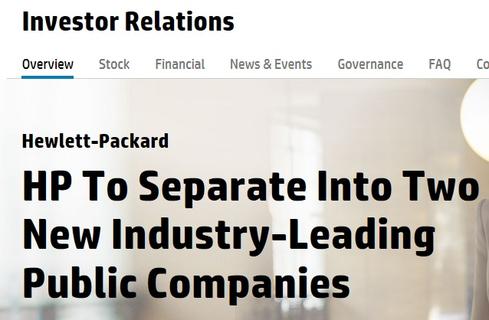 HP's Investor Relations site sells the split-up plan to stockholders. The stock was up more than $1.70 on the news.

HP isn't just spinning off the PC business, as Apotheker had proposed. In 2012 Whitman combined what had been separate PC and printing businesses that share consumer-centric customer bases and distribution channels. The printing side gives that business a high-margin component and financial strength to compete in what is otherwise a low-margin business. What's more, the business will retain the valuable HP brand and blue logo as HP Inc., Whitman pointed out.

Hewlett-Packard Enterprise will be a smaller company competing against giants including Cisco, IBM, Oracle, and EMC, but it will be better positioned to pursue organic growth investments and acquisitions. During Monday's conference call, Cathie Lesjak, HP's CFO, tied her mention of "material, non-public information" that could impact HP's balance sheet to the possibility of merger-and-acquisition activity.

"We have worked hard to improve our balance sheet, and as a result we have more flexibility around M&A," Lesjak said. "We will be actively looking at M&A throughout [2015]."

It was recently revealed that EMC had been in talks about a possible merger with HP, but those talks broke down. It could be that HP wanted to split the business first before consummating such a mega deal. EMC is not dissimilar to HP; both compete in the hardware and software business. However, EMC has a stronger software component than HP has managed to build in recent years.

The pace of change in technology has been HP's biggest enemy for years. Despite progress under Whitman's watch, the company that will become HP Inc. is still behind in tablets and non-existent in the smartphone market. Hewlett-Packard Enterprise sorely needs more software, higher-value services, and a stronger cloud play if it is to become a high-margin business of higher strategic importance to midsize and large enterprises.

It will take a full year for HP to split into two separate businesses, Whitman cautioned, but it's clear that this move has been in the planning stages for a long time.

"This has been a very detailed and thoughtful process about how to roll this out," said Whitman. "Obviously when you make an announcement of this magnitude there may be some challenges, but we are all over them."

HP is not suddenly in great shape in either the PC or enterprise tech businesses, but the company's fortunes have been steadily improving in both markets. Whitman said the split will accelerate HP's progress in two separate markets. The tech market doesn't like "tortoise and hare" analogies, but as two companies, the HP tortoise will be in a better position to catch up to its competitors in each market.

"Whitman deserves credit for doing this carefully and methodically, that's for sure."

There is definitely a method to this action and while everyone is talking about the immediate split HP has already moved on to the next 5 years of planning, I suspect that we'll see some more news in about a year.  I agree that not being in the mobile market hurts them but they have some strong points in the consumer market and their brand name is still very valuable.  It doesn't make sense for them to sell off the consumer side at this point. Spinning off will let them keep the HP name on the consumer items and keep that image but operate more like a Lenovo when they bought parts of IBM.

@SaneIT: That's a very imaginable scenario, as is the enterprise side merging or getting acquired by one of the bigger players in that space. In both the consumer and the enterprise side, the weakest link I see is the lack of a realy mobility play for HP, they have a great deal of lost ground to make up for not just in hardware but in software that can serve the mobile enterprise. Will be interesting to watch how this all plays out...


Whitman deserves credit for doing this carefully and methodically, that's for sure.
Reply  |  Post Message  |  Messages List  |  Start a Board

I agree with zaious, this is the way HP should have been split.  The gap between consumer and enterprise markets is so wide that it is hard to bridge.  This should let each side focus on their market and move at the speeds necessary to support those markets.  If there was one thing I might be worried about it would be the potential for a sell off of the consumer side much like IBM did with Lenovo.
Reply  |  Post Message  |  Messages List  |  Start a Board

I read somewhere that for a large company it is difficult to manage multiple components at a time.  I think by breaking up the company it will unable them to really focus on they are good at.
Reply  |  Post Message  |  Messages List  |  Start a Board

And to this point, Charlie, Whitman and Lesjak have also laid all sort sorts of plans for strategic sourcing, purchasing, supply chain and logistics alliances between HP Inc. and Hewlett-Packard Enterprise so they can take advantage of buying and logistics efficiencies where possible.
Reply  |  Post Message  |  Messages List  |  Start a Board

TThis shows the right way to do the splitting. It looks like past attempt was just a gimmick -a rush, hasty decision. However, as the article metioned, it will be a good compitition against giants. We will wait to see how HP Enterprise performs.
Reply  |  Post Message  |  Messages List  |  Start a Board

Nice analysis above. When Apotheker first proposed it, it was in reaction to a bad quarter in which he didn't want to take responsibility for a set of bad numbers. When the CEO talks through his hat that way, it's extremely damanaging to the business. HP servers were dependent on the flow of parts realized in joint purchases with the PC unit. So he sank the prospects of two of his leading businesses with one statement, quite an accomplishment. This is a much better considered plan.
Reply  |  Post Message  |  Messages List  |  Start a Board

Leo Apotheker raised the possiblity of a PC spinoff back in 2011, but it was too much, too soon and it didn't fly (and Apotheker sank). Meg Whitman teamed the PC business with printers organizationally and has methodically created a well-laid split plan. Where investors balked the first time around, they're eating it up today, driving up the stock price. Next step will be accelerating HP Inc. and Hewlett-Packard Enterprise moves to catch up with the leaders in each market.
Reply  |  Post Message  |  Messages List  |  Start a Board
Editors' Choice
Hot Topics

10 IT Trends to Watch for in 2021 Cynthia Harvey, Freelance Journalist, InformationWeek,  12/22/2020
White Papers
From MFA to Zero Trust
Passwordless: The Future of Authentication
All In, Online Gaming & Gambling
Cloud Connectivity -- Your Guide to the Network
Threat Intelligence Solutions: A SANS Review of Anomali ThreatStream