7 Bold Tech Ideas That Will Make You Uncomfortable - InformationWeek

0%
Tweet
Elite tech leaders pushed the boundaries at the InformationWeek Conference. At least one of these ideas should make you squirm and think, "We need to do that." 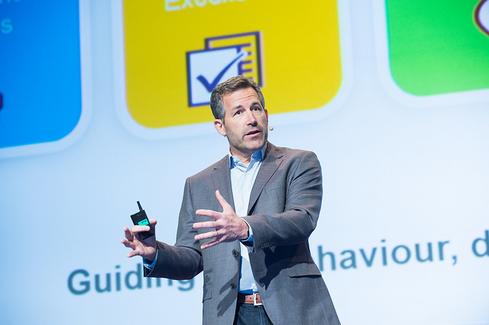 Put Feet On The Street In Silicon Valley

Many non-tech companies have set up shop in Silicon Valley -- from BNY Mellon to Ford to Wal-mart.

Drugmaker AstraZeneca joined that list after Dave Smoley joined as CIO, and he based the decision largely on personal experience. When Smoley worked as a CIO outside the valley at places such as GE and Honeywell, he made the annual pilgrimage to meet with big vendors, including Oracle, Cisco, and a few startups. Then he become Flextronics CIO, and lived in the Bay Area full time.

"It was a Eureka," Smoley said. "It was absolutely mind-blowing how big a difference it made when you were living there. You were sitting at Starbucks, or a dinner out, or on the soccer field, and you're bumping into people who are living technology, and there's just a conversation that's informal that actually drives a higher level of engagement and creativity."

Plus, living in the Bay Area puts you closer to the early growth-stage companies, who have the most game-changing ideas even if they're not getting much of your IT budget. "You're not spending a lot of money on those technologies today, and it will probably be a long time before you're spending a meaningful amount," Smoley said. "But that's where the real innovation is, that's where the real leading-edge thinking [is] about how you, say, manage security."

Smoley hired a CTO in Silicon Valley, and he has only a few people on his team today. He plans to have 30 to 50 employees, hiring opportunistically as he finds people who fit well. "You don't have to have an army of people," he said.

Great point. I think this is overlooked way too often.
Reply  |  Post Message  |  Messages List  |  Start a Board

Haha this made me think of a meme I saw about Wal-Mart having 50 registered and only two open because "f you"....
Reply  |  Post Message  |  Messages List  |  Start a Board

It is always important to analyze the risk since it will occur in different levels. Especially when you are working on projects.
Reply  |  Post Message  |  Messages List  |  Start a Board

True. However there can be instances where you should accept risk even without a plan B. in this case the best option would be to analyze the impact of risk.
Reply  |  Post Message  |  Messages List  |  Start a Board

In my opinion quality and cost are more important. Speed will lead towards quality issues.
Reply  |  Post Message  |  Messages List  |  Start a Board

Haha...funny, you know cost will always be number one. Speed or quality will always take the backseat to cost...and unfortunately quality often gets left behind for speed.
Reply  |  Post Message  |  Messages List  |  Start a Board

There should ALWAYS be a contingency plan in place when taking any risk, business or otherwise!
Reply  |  Post Message  |  Messages List  |  Start a Board

I think Walmart should focus on keeping its self-checkout POS stations in operable condition before it worries about anything else.  As is, those things are constantly out of order.  And management doesn't like to bring in more than 1 employee to run register for every 50 customers standing on the checkout line.
Reply  |  Post Message  |  Messages List  |  Start a Board

Mom always said I was naively optimistic, but I believe that the speed focused on by several of the tech leaders featured here can be a win, if it's done right. I'm reiminded of the day I didn't sleep through a high-school physics class, and learned the difference between vector and scalar quantities. Speed of IT transformation is essential, IF it has a specific direction, or goal. And that goal should always be improvement of agility, resilience, and/or trustworthiness ("ART") of an enterprise.

Little if anything transpires faster than the speed of human thought. So if the direction of IT transformation is well thought out and focused on improving business operations, speed will thrill, not kill. But speed without clear direction is nothing more than a major catastrophe waiting to happen.
Reply  |  Post Message  |  Messages List  |  Start a Board
Page 1 / 2   >   >>
Editors' Choice
Hot Topics