Amazon CEO Jeff Bezos said he doesn't see the dystopian workplace described in a New York Times expose. That doesn't mean it's not there. Let Amazon be judged by how it treats the least among its workers.

Amazon CEO Jeff Bezos doesn't recognize the "soulless, dystopian workplace" described in a New York Times report about the company that appeared over the weekend.

In what's being characterized as an "internal memo" – let's pretend it wasn't intended for public consumption – Bezos encourages employees to email him if they witness the inhumane treatment of employees that he insists he's never seen.

"The article doesn't describe the Amazon I know or the caring Amazonians I work with every day," wrote Bezos.

When was the last time a CEO complained about the company he founded, or put up with unaccommodating subordinates? Bezos doesn't have to spend unpaid time being searched at the end of every shift so that merchandise isn't stolen from Amazon's warehouses. He doesn't have to worry about non-compete clauses in temporary work contracts. His job is secure. When you're a CEO, a billionaire, and a widely admired innovator, things generally look pretty rosy.

Tim Bray, a senior engineer at Amazon Web Services and a veteran of Google and Sun Microsystems, also denies seeing the kinds of incidents reported by the Times – people crying at work, people fired without justification, outrageous hours, and a hostile work environment. "Not say­ing that nev­er did hap­pen, or isn't hap­pen­ing some­where, just that I haven't seen it," he wrote in a blog post.

Yet Bray, too, is privileged in his view. As one person posting on Hacker News quipped sacrastically, "Yeah, I'm totally astounded an Internet personality who is well known to have a very loud voice and is financially secure enough not to be easily controllable isn't treated poorly…" 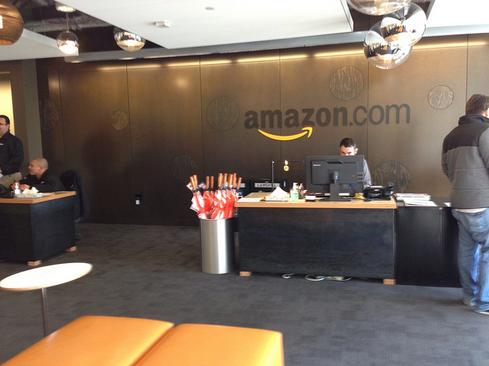 Another Amazon employee, Nick Ciubotariu, head of infrastructure development at Amazon.com Search Experience, ups the ante by accusing the New York Times of bias, of deliberate inaccuries, without any evidence of animus. "I'm not going to stand idly by as a horribly misinformed piece of 'journalism' slanders my company in public without merit," he wrote, and then went on to imply that his experience at the company somehow outweighs the experiences reported in Times article.

If Amazon really wanted to settle this matter, it would invite all non-management employees to participate in an anonymous online survey about workplace satisfaction, and to have those survey results sent directly to the New York Times for publication.

I happen to know one of the "more than 100 current and former Amazonians" interviewed in the Times article. I emailed him about it over the weekened, and said he thought the article captured the environment at Amazon very well. Public discussions of the article in a variety of forums have brought posts from people reporting similar experiences. Moreover, this is hardly the first report to raise questions about Amazon's labor practices.

While Amazon may be hoping that positive narratives cancel the negative ones, that's not how the company should be judged. Amazon can be both wonderful and horrible at the same time.

In that, it's just like a lot of large companies. Apple CEO Steve Jobs is said to have treated some employees terribly, and the labor issues associated with its manufacturing contractors are well known. Apple, to its credit, has responded to criticism. Presumably, Amazon will too.

It has always been thus. Tension between labor and management exists everywhere. It requires constant attention, like a marriage. It's not something that can be taken for granted. With luck, it can be managed profitably, humanely, and ecologically for all concerned. If it isn't, it becomes a problem, as it appears to have become for Amazon.

With more than 150,000 employees and many different business units, Amazon can be compared to a city. How would you characterize, say, San Francisco? It has beautiful neighborhoods and miserable ones. It has happy citizens and unhappy ones. It has opportunity and economic unfairness. It's inadequate to say San Francisco works for me, or vice versa, as if it were a court verdict.

Sources of pride and of shame can't be added and subtracted to produce a mathematical summation. This is where data-driven companies fall down: Success on a human level is not a graph pointing upward. The satisfaction of the majority of Amazon workers – if that can be assumed – doesn't negate the dissatisfaction of the minority. Let Amazon be judged by how it treats the least among its workers.

Bezo's response shouldn't be what amounts to "I don't see it. Email me if you do," as if someone had reported a unicorn in the cafeteria. It should be "Show it to me, so we can fix it."

Amazon should start by taking a look at the company's lack of paternity leave. Is that really a policy Amazon can defend?

Amazon has succeeded as a technology company. But succeeding as a decent company is harder still. Public companies optimize for shareholder value. They have yet to agree upon, let alone adopt, a metric for social responsibility or generosity toward employees.

Thomas Claburn has been writing about business and technology since 1996, for publications such as New Architect, PC Computing, InformationWeek, Salon, Wired, and Ziff Davis Smart Business. Before that, he worked in film and television, having earned a not particularly useful ... View Full Bio
We welcome your comments on this topic on our social media channels, or [contact us directly] with questions about the site.
Comment  |
Email This  |
Print  |
RSS
More Insights
Webcasts
Managing Your Enterprise Collaboration Platforms
Leveraging Infrastructure as Code to Streamline Security & Operations
More Webcasts
White Papers
How Secure Are Your Endpoints?
GRC Buyer's Guide - 5 Steps to Success
More White Papers
Reports
Incident Readiness and Building Response Playbook
The State of Malware Threats
More Reports


As the article notes there are 150,000 employees at Amazon like every big company there are great departments and managers and there are terrible managers and departments. It is almost impossible to make a company that size homogeneous. If Amazon suspects they have a problem they should implement an employee hotline to report issues of employee abuse and be committed to investigate the truth. To make the hotline valuable it should be manages by a neutral third party that is committed to providing Bezos with the truth. I don't expect that too many employees will be emailing him for fear for retribution in their position.

nomi, yes, sometimes that's the case. You never know what to believe. Things would be easier if everything were more transparent. -Susan
Reply  |  Post Message  |  Messages List  |  Start a Board

Broadway, that's good to hear. In Finland, taxes are high, but that comes back to you in the form of health services, unemplyment benefits, student benefits, and other benefits. -Susan
Reply  |  Post Message  |  Messages List  |  Start a Board

GAProgrammer, interesting, indeed. Yes, some ethics may vary from country to country. However, there are some basics that I believe are, or should be the same everywhere, especially since we live in a globalized world. -Susan
Reply  |  Post Message  |  Messages List  |  Start a Board

tjgkg, that would be good. It's unbelievable this what is happening in some companies. -Susan
Reply  |  Post Message  |  Messages List  |  Start a Board

tjgkg, it's a pity. They should. Yes, it's a really lousy excuse to justify lack of benefits comparing to others who don't offer them either. You immediately can see the ethics behind the company. -Susan
Reply  |  Post Message  |  Messages List  |  Start a Board

Stratus, yes, but it's still unbelievable. The excuse of "company X doesn't do it either" it's really sad. Doesn't the government push companies in the US in this areas? -Susan
Reply  |  Post Message  |  Messages List  |  Start a Board

Is Amazon's lack of paternity leave even legal? It's hard to believe this is still an issue in this century. -Susan
Reply  |  Post Message  |  Messages List  |  Start a Board

<It has always been thus. Tension between labor and management exists everywhere. > Exactly! Amazon is hardly unique in that
Reply  |  Post Message  |  Messages List  |  Start a Board
InformationWeek Is Getting an Upgrade!