On Microsoft's 40th birthday, Bill Gates shares his vision that the company will "make the power of technology accessible to everyone."

Forty years ago, Microsoft was nothing but a tiny startup powered by a massive vision. Bill Gates and Paul Allen, both college dropouts, shared a dream that was seemingly impossible in 1975: to put a computer on every desk in every home.

Today, it's hard to believe that Microsoft is only 40-years-old. The software behemoth boasts a workforce of nearly 123,000 employees and a Redmond, Washington, campus of 8 million square feet. Its Windows operating system, now more than 30-years-old, powers millions of devices around the world.

After his rise to fame as Microsoft's CEO and world's wealthiest man, Gates has scaled back his role at the company. A philanthropic man, he chose to redirect the bulk of his efforts towards the Bill and Melinda Gates Foundation, which aims at improving the quality of life within impoverished countries.

[Surface 3 Vs. iPad Air 2: The Competition is Fierce]

Although his role at Microsoft is considerably smaller, Gates remains invested in its future. He currently serves as technical advisor to Satya Nadella, who stepped into his CEO shoes just over a year ago. Gates also spends a lot of time collaborating on reviews for new Microsoft products like HoloLens, Cortana, and Skype Translator.

In honor of Microsoft's 40th birthday on April 4, the former leader wrote an email to employees detailing his vision for the years to come, providing advice for the journey ahead. The email was originally tweeted by Amit Roy Choudhary and confirmed by Microsoft.

Gates sees a future in which Microsoft continues to broaden its reach to global users and businesses. Technology, while ubiquitous in our daily lives, continues to be unreachable for many people who lack the expertise or funds to use it. Gates encourages the people at Microsoft not only to drive technology, but to bring those innovations to new audiences. 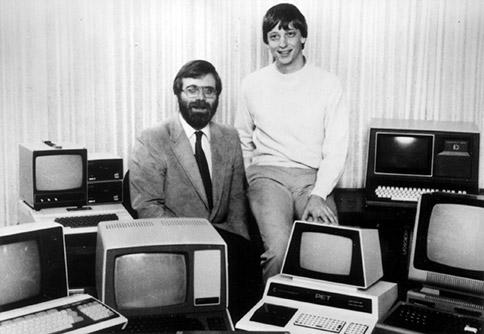 "So I hope you will think about what you can do to make the power of technology accessible to everyone, to connect people to each other, and make personal computing available everywhere even as the very notion of what a PC delivers makes its way into all devices," he wrote.

Microsoft has come a long way in 40 years, Gates notes, but now it's time to think about the future. "What matters now is what we do next," he concluded.

Kelly Sheridan is the Staff Editor at Dark Reading, where she focuses on cybersecurity news and analysis. She is a business technology journalist who previously reported for InformationWeek, where she covered Microsoft, and Insurance & Technology, where she covered financial ... View Full Bio
We welcome your comments on this topic on our social media channels, or [contact us directly] with questions about the site.
Comment  |
Email This  |
Print  |
RSS
More Insights
Webcasts
Hybrid Cloud: The Great Balancing Act
Nip Ransomware in the FUD: Detecting Attacks Pre-Encryption
More Webcasts
White Papers
Why Add Security to Your Skill Set and How to Do It
The Hidden Security Risks of APIs: How to Protect Your Brand, Business, and Data
More White Papers
Reports
Enabling Enterprise Resiliency Through Cyberthreat Detection
How Data Breaches Affect the Enterprise (2020)
More Reports

I think that might be underestimating the magnitude of Windows penetration.  Aren't there are AT LEAST 1 billion Windows desktops?  Although non-desktop use cases are increasingly replacing Windows with Android and/or Linux variants, there are still countless Windows-based ATM, Kiosk, POS and various automated controller installations -- perhaps enough to make the desktop billion plural.
Reply  |  Post Message  |  Messages List  |  Start a Board

Where would the internet and Wall Street be had not personal computing evolved to include "pc networks" and a global internet?

Bill Gates - I respect your good works. I've always felt you had your feet on the ground, even if it wasn't the best thing for your marketing department. I always remember years ago near the beginning of the PC revolution ala dial-up connections when some interviewer asked about PCs all over the world ... etc, and you mentioned how many places have other concerns - like food, like water, like electricity.

Bill Gates and Microsoft established somthing that was different from IBM, Digital Equipment and the Unix companies that had come before it. It produced a proprieary technology but opened it up to third party developers and users in ways that hadn't been done before. Microsoft was one of the first companies to realize that other companies would provide value to an ecosystem around its operating system. It maintained strict control of the OS and its interfaces but produced tools and libraries that third parties could use. The PC revolution expanded computer far beyond what it might have been without such an approach, although  would have liked to have seen what 2-3 PC operating system competitors might have produced. Part of the success of Windows was due to those agreements with manufacturers that, for a discount, allowed them to put Windows and only Windows on the systems they shipped.
Reply  |  Post Message  |  Messages List  |  Start a Board

I think it's easy to imagine the fact that Microsoft is 40 when you consider how much they have changed over the years.

I also think that the company is in line for some serious changes, and I believe the new leadership is willing to make that happen.
Reply  |  Post Message  |  Messages List  |  Start a Board

Microsoft certainly has its fair share of fans and haters, but I side with you on this. A company's history is a greater indicator of its success than its latest hit product. We might not see a fantastic new Microsoft product or service every other day, but no doubt the company shaped how we use computers. I think Gates makes a good point in saying that Microsoft has the foundation to make some major advancements in the future - also excited to see what's in store!
Reply  |  Post Message  |  Messages List  |  Start a Board

Love them or loathe them, I'm a huge fan of Microsoft.  Not only did they deliver on their promise to make computing available to a larger audience that was never really able to experience it before, but the amount of innovation that they continue to drive is incredible.  We can't expect every Microsoft product or service to be a hit, but we can't deny their place in the last 20 years of computing.  I am very excited to see the future they are working on, from those projects we already know about, and the ones that are still under wraps.
Reply  |  Post Message  |  Messages List  |  Start a Board
Editors' Choice
Hot Topics

11 Ways DevOps Is Evolving Lisa Morgan, Freelance Writer,  2/18/2021
White Papers
Why Add Security to Your Skill Set and How to Do It
Supercharge Incident Response with DDI Visibility
Are We Cyber-Resilient? The Key Question Every Organization Must Answer
Understanding Credential Abuse Attacks: A Real-World Example
Sunburst: Impact and Timeline