Sensor-equipped objects and their networks -- what Cisco calls the Internet of Everything -- will reshape your life, Cisco CEO John Chambers says. Take a closer look. 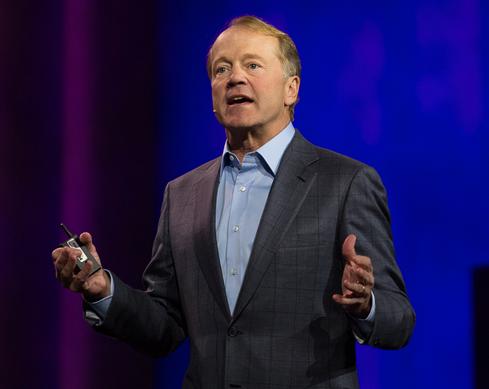 Cisco had an exhibit on the main floor of the International Consumer Electronics Show for the first time this year. That might seem odd, given that Cisco has spent the last few years jettisoning its consumer-oriented products, such as the Flip mini-camcorder and Linksys networking gear.

But Cisco CEO John Chambers believes his company's Internet of Everything (IoE) plan will alter the trajectory of virtually every person on the planet, consumer and professional alike.  Cisco doesn't plan to sell directly to consumers, but whether it's smarter power grids, personalized retail experiences, improved industrial efficiency, or the ability to control the infrastructure of an entire building with a smartphone app, IoE will be "bigger than anything that's ever been done in high tech," Chambers promised during his CES keynote.

To make his case, the Cisco boss enlisted some non-traditional help, including a brief but amusing appearance by comedienne Sarah Silverman. But he also came armed with his customary barrage of statistics, none more eye-opening than the $19 trillion in new revenue Cisco believes IoE can generate by 2020.

Buoyed by exponential growth in our ability to capture and analyze data, new tech will "get the right data to the right device at the right time to the right person or machine to be able to make the right decision," he declared, arguing that even seemingly inane concepts like sensor-equipped garbage cans could produce billions of dollars in efficiency-based savings.

"If you look back a decade from today at the impact of the Internet of Everything, I predict you will see it will be five to 10 times more impactful than the whole Internet has been today," he said.

How is IoE supposed to revolutionize the world? In the case of smart trash bins, Chambers said embedded sensors can reduce calls to waste management by allowing officials to see how full a can is, whether hazardous materials are inside, how pickup efforts can affect traffic patterns, and even whether a given garbage can's contents might contain a particularly offensive odor. These insights might not seem ground-breaking alone, but Chamber said that together, they add up to billions in savings.

Chambers offered a range of other examples, from parking meters that adjust their rates based on demand, to TV programs that allow viewers to easily purchase items they see on the screen, to connected cars and home automation systems, and even clothes that notify the wearer when she is getting sick.

At CES, Chambers discussed some of Cisco's IoE plans for the first time, such as the company's cloud-based Videoscape TV delivery platform for service providers. But much of what he said echoed remarks he and other Cisco execs have made over the last year, during which the company showed itself to be one of the biggest proponents of connected infrastructure and the new breed of applications this infrastructure will support.

Cisco's smart grid and smart city projects have been in the works for years, but Cisco's messaging has grown bolder over the last 12 months. Last January, company execs touted IoE possibilities that seemed pulled from science fiction, such as humans who live to be hundreds of years old thanks to, among other things, personalized medicine and better collection of biometric data through wearable technology and sensor-embedded household objects.

In February, Chambers told business and government leaders visiting Cisco's San Jose, Calif., headquarters that private industry stood to gain $14.4 trillion from IoE by 2020. The $19 trillion prediction he championed at CES built on this figure, lumping in potential profits from the public sector.

"We're all in. We're making this our cornerstone of our campaign to become the number-one IT company," Chambers said. "It isn't a billion-dollar commitment. It's way, way beyond that in terms of the resources and time we're going to put behind it."

In June, Cisco released a report that claimed corporations had generated over $600 billion in IoE-related profits so far that year. The company spent 2013 offering new examples of the technology's potential, from sensor-equipped basketballs that give coaches and players real-time insight into the game, to new advances in telemedicine, to personalized retail experiences that rely on location-based analytics derived from shoppers' phones.

Despite its leaders' bullishness, Cisco has faced setbacks over the last year. Thanks to slowing sales in its traditional networking gear and weak demand from emerging markets, the company cut its sales growth outlook in December. Cisco also announced plans earlier in the year to cut 5% of its workforce as it realigns its businesses.

Still, Chambers remained self-assured at Interop New York in October, telling InformationWeek editor-in-chief Rob Preston that the company should not be underestimated. One reason for the confidence? IoE's potential is real.

Indeed, Cisco isn't the only company betting on connected devices, pervasive sensing, and smarter infrastructure. The basic concept behind IoE goes by other names, such as the industrial Internet, or the Internet of Things. Regardless of the moniker, the technology has been touted by GE as a $10 trillion to $15 trillion opportunity over the next 20 years, and Intel dedicated much of its CES presence this year to technologies that tap this vein.

Cisco's view is that IoE technically differs from the Internet of Things; IoT is composed of connected objects, while IoE encompasses the networks that must support all the data these objects generate and transmit. "Software by itself won't get the job done," Chambers said at Interop in October, arguing that IoE demands data center software and hardware that work in concert.

This distinction represents one of the main ways the company has differentiated its software-defined networking strategy from those of its competitors. Connected, location-aware applications require more bandwidth, more intelligence on the edge of the network, new considerations for security and orchestration, and more cohesive, programmable infrastructure, Cisco argues, and it held an Internet of Things World Forum in Barcelona last fall in an attempt to unify industry players around common standards. The company also recently established a business unit dedicated to advancing the concept.

How does Cisco foresee this technology changing your life? Explore our slideshow for a peek into Cisco's vision for the Internet of Everything.

Agreed, Rob. The Watson commercials are particularly good I think. What surprises me most about  this Cisco CES event is that it features Silverman. I find her mildly amusing, but she's not exactly a safe, "corporate" choice - quite the contrary. She has the potential to get Cisco the exact wrong kind of mainstream publicity.
Reply  |  Post Message  |  Messages List  |  Start a Board

>In the end, if IoE is done right, I think it can be profoundly positive-- but if it's not done right, we could have profound results of another sort.

I would suggest that the issue is best framed by asking who is being served. If it's the product owner, so much the better. If it's the service provider or some other third party, there's a problem.
Reply  |  Post Message  |  Messages List  |  Start a Board

Interesting to note that Cisco released a study just before Chambers' talk, projecting the public sector (including the defense and education sectors) could potentially generate $4.6 trillion in savings and new revenue streams worldwide over the next 10 years.  But having the ability and collecting on it are two different things.

I agree we've been hearing some of these dreamy examples for ages, like automated health monitoring that remains a distance dream. But it's a mistake to dismiss the big idea because some examples are failing. Listen to ConocoPhillips CIO talk about using sensor data from gas and oil wells to optimize performance (audio link below). The big change was being able to collect data every minute, instead of daily, and the company estimates some wells can get up to 30% performance as a result.

Here's that link to our CIO interview:

The recent retail store data breaches add credence your concerns. If the tech industry hasn't gotten that part of security right (how many years ago was the TJ Maxx breach?), how ready are we to take on the security of Cisco's highly-interconnected vision?
Reply  |  Post Message  |  Messages List  |  Start a Board

Cisco has aimed a lot of its marketing at consumers for years, and not because it was pushing Flip phones and Linksys routers. It's the same reason IBM pushes its Smarter Planet messaging to consumers: It wants everyone -- consumers and business people alike -- to equate its brand with the modern technology-based economy and world. It's not a product message.
Reply  |  Post Message  |  Messages List  |  Start a Board

Thanks for the catch, epjones.

I definitely relate to some of your concerns about corporatocracy, and I agree that Cisco will have to be extremely transparent if this technology is going to fulfill Chambers's predictions. The same goes for its partners, who are the ones actually implementing Cisco's stuff for the end user.

The second slide overviews security and privacy to the extent that Chambers talked about it at CES-- i.e. mostly broad allusions to users being able to opt in or opt out, and to users being "in control." But as I mentioned on the same slide, Chambers didn't elaborate on this attitude, or how it might vary across different products and services-- e.g. how is opting in or out of a television service different from opting in or out of a smart car service?

I actually heard someone at Cisco suggest once that data from the "quantified self" could one day be used to dictate your health care costs in the same way that credit scores are currently used to dictate your loan options. That sounds positively dystopic to me. That said, I've probably talked to Cisco execs a dozen times in the last year about IoE, and the importance of "opt in/ opt out" transparency has been a recurring theme. I was also there early last year when Chambers pitched business and government leaders on the idea of an Internet of Things World Forum, and everyone present appeared appropriately aware of the tech's privacy and security implications.

In the end, if IoE is done right, I think it can be profoundly positive-- but if it's not done right, we could have profound results of another sort.
Reply  |  Post Message  |  Messages List  |  Start a Board
InformationWeek Is Getting an Upgrade!