50%
Tweet
Dell leaders dish on life during the buyout process -- and what changes now that CEO Michael Dell is back in charge.

At last week's Dell World Conference, Dell CEO and founder Michael Dell clarified how the company will operate now that it's back in his private control. Talking points included the company's ambition to be a premier manager of clouds, rather than a creator of cloud infrastructure, as well as a recommitment to its longtime PC and server businesses.

But to succeed, Michael Dell must execute two important cultural shifts. His company is morphing from a hardware-driven enterprise to one oriented around software and services. Dell is also moving from an operational model that was beholden to quarterly reports to one that theoretically allows for more risks and long-term bets.

At Dell World, several of the company's senior leaders spoke to InformationWeek about working through the buyout process, and why they believe Dell will better serve customers as a private company.

Dell Enterprise Solutions Group president Marius Haas, the former HP executive spearheading Dell's move to software and services, said the buyout plans were first disclosed to him a year ago, when Michael Dell pulled him into a meeting room during Dell World 2012.

"My time spent on it was relatively little," he said, noting that the company took pains, including setting up a review panel, to separate the buyout process from day-to-day business.

Such separation is easier planned than implemented, however; given that activist investors such as Carl Icahn seemed poised at times to wrestle control away from Michael Dell, weren't some employees affected by the uncertainty?

Haas said that because the buyout process was isolated from the rest of the business, most employees learned about developments from the media. "I think the general tone was, 'Look, I can't influence the outcome, so why get excited? I'll just go do my job,'" he said. 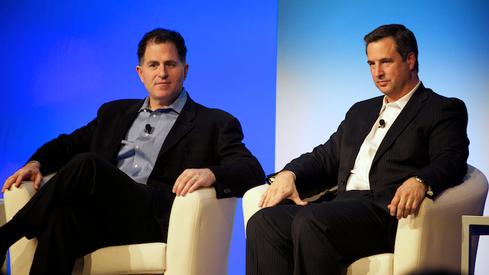 But others were less eager to brush off the stress. Forrest Norrod, VP and GM of Dell Servers, told InformationWeek he'd be lying if he said some people didn't feel anxious. He said Michael Dell has been "very relaxed" since the buyout concluded.

Dell leaders rejected contentions that the company settled into a holding pattern while the buyout wore on. In the quarters since Michael Dell announced his privatization plans, the company's revenue and margins have taken a beating, pummeled by the floundering PC market and shifting dynamics in server sales, among other culprits. Icahn, Michael Dell's chief nemesis during the buyout, claimed the CEO was cheating shareholders out of future riches. But Dell's tumbling financials did little to support Icahn's contention that the company's stock was undervalued. Some commentators noted with a hint of conspiracy that Michael Dell had little incentive to show his hand until investor opposition had been quelled.

"During the go-private transaction process, a number of things were being said that weren't true," said Dell Software president John Swainson. "A number of aspersions were made about the company's strategy, that the company hadn't been moving to take advantage of its solutions focus. But those weren't true."

Swainson conceded that Dell might have seemed inactive relative to the last few years, during which it spent billions acquiring software companies such as AppAssure, Quest, SonicWALL, and Credent. "We haven't done as many acquisitions since the buyout, but we wouldn't have anyway," he said. "We needed to spend time assimilating, integrating, making sense of [the prior acquisitions]."

To Swainson's point, Forrester analyst David Johnson told InformationWeek at Dell World that most of the company's announcements, though promising, were relatively easy to predict. That Dell would partner specifically with Dropbox or Red Hat might have been surprising, but the company had already begun telegraphing its intentions for cloud management and orchestration.

Haas said there were no "material changes in the company's roadmap during the buyout," and that the company is currently focused on rolling out products based on R&D from the past 12 months, and on bolstering its partner ecosystem.

Indeed, though it remains to be seen what Dell has in store for 2014, Michael Dell's emphases at Dell World didn't deviate much from those Dell leaders preached throughout the spring and summer. The company also launched new products before the buyout had concluded. Several of these, such as the PowerEdge VRTX converged infrastructure product for SMBs and remote offices, suggest a forward-looking mindset, rather than caution.

Jeff Clarke, Dell's president of End User Computing, said risk-taking will be encouraged now that the company is privately held. "Michael said we're gonna make bets, and having that flexibility is a good thing," he said. "Michael doesn't expect you to be 100% successful, but if you fail, he expects you to know why you failed."

Haas said Michael Dell's personal stake in the company is galvanizing to employees. "[Oracle CEO] Larry Ellison is the only one in that same realm. But Michael is there day in, day out. He doesn't have a sailboat thing he is spending time on. This is his life."

When asked how Dell differs from HP and other companies he's worked for, Haas said, "Here, the culture of 'we want to win' is pervasive."

Swainson, whose career has spanned CA Technologies and IBM, said Dell's culture is a mix of entrepreneurial independence and seasoned pragmatism. "Most of the senior guys have been pretty established executives at other companies, so there is this blending of the Michael Dell 'we started in my dorm room, we can do anything' mentality with practical experience," he said.

Unique culture or not, Dell still needs to prove to enterprise customers that its products can stand alongside those from HP, IBM, Cisco, and others, and that its decision to partner with other companies will help it remain focused and play to its strengths. Dell leaders said they're pleased with the company's position and promised major announcements in 2014, so current and would-be customers should have much to assess in coming months.

We welcome your comments on this topic on our social media channels, or [contact us directly] with questions about the site.
Comment  |
Email This  |
Print  |
RSS
More Insights
Webcasts
Are You Ready for When Cyber Attackers Get In?
Linking, Orchestrating, and Managing Your Enterprise Security Systems
More Webcasts
White Papers
Using AI to Power AppSec
Simplify Your App Security
More White Papers
Reports
Can You Spare 10-12 Mins to Help Us Out with a Survey on Tech Trends?
Got 7 Minutes? Dark Reading Needs Your Help With Our Survey on Incident Response
More Reports

I get the same impression, Laurianne. In interviews, Dell execs often stand out because they seem sincere in their conviction that the company is placing the right bets. And I've also found that they have a pretty good sense of how their individual teams and efforts fit into a bigger picture.

Dell's morale says only so much about whether a company should buy from Dell, HP, Cisco or someone else, of course. Even if Dell's enterprise products are rounding into shape (and some of them are, such as the EMM product that will unite KACE and Wyse technologies), it's one thing for Dell to sell computers and servers, and another thing for them to sell end-to-end solutions that cohesively unite a range of disparate technologies. To succeed, Dell needs the right culture among not only corporate employees but also its sales teams and partners.The channel programs and tech partnerships they've forged so far are a promising start, but there are still a lot of pieces that need to fall into place.

But if you put stock in confidence, the Dell guys seem to have it. Michael Dell could do a lot of things at this point-- run for governor of Texas, etc. The fact that he's chosen to put a few billion of his own dollars into the company doesn't seem like an ego move. Sink or swim, it's hard to believe he doesn't have a plan.
Reply  |  Post Message  |  Messages List  |  Start a Board

"Here, the culture of 'we want to win' is pervasive." That rings very true with all the Dell executives I have met wth through the years. Now that Dell is private again, Michael Dell can play harder than he could previously.

He shows a real hunger for a second half. He could have gone on his way and counted his 90's successes as his legacy. He did not. I for one am eager to see what Dell has up his sleeve.
Reply  |  Post Message  |  Messages List  |  Start a Board
Editors' Choice
Hot Topics