Facebook has hired Regina Dugan away from Google in a recruitment win that reflects the power of Facebook's gravity and the challenge Google faces to retain top talent.

Dugan, who previously served as a director of the US military's Defense Advanced Research Projects Agency, had been running the Advanced Technology and Products (ATAP) group at Alphabet's Google, where she oversaw initiatives like Project Tango, Project Ara, and Project Jacquard.

Facebook CEO Mark Zuckerberg made the announcement in an online post, noting that Dugan will lead a new group called Building 8 that will focus on creating hardware products related to Facebook's mission to connect the world. He said Facebook will be investing hundreds of millions of dollars into this effort over the next few years.

"I'm excited to have Regina apply DARPA-style breakthrough development at the intersection of science and products to our mission," Zuckerberg said. "This method is characterized by aggressive, fixed timelines, extensive use of partnerships with universities, small and large businesses, and clear objectives for shipping products at scale." 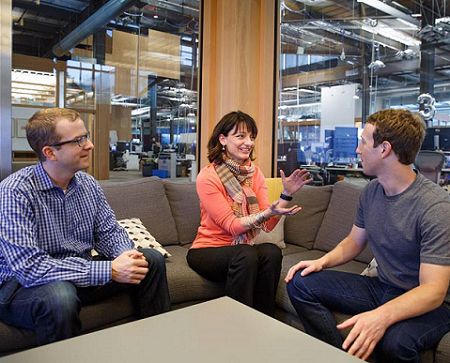 Facebook offered a glimpse of the technology it has been developing at its F8 developer conference this week. On Tuesday, the company showed off its solar-powered drone, Aquila, which will remain in the air for months at a time to provide wireless Internet connectivity to underserved areas.

The company has also spearheaded initiatives like the Open Compute Project, the Telecom Infra Project, and its Surround 360 panoramic camera.

Zuckerberg outlined a 10-year roadmap for the company, stating that Facebook's goal is "to give everyone the power to share anything with anyone."

About three times as many Facebook employees -- 1,506, compared to 559 -- formerly worked at Google than vice versa, according to LinkedIn searches. While such data is anecdotal, and based on self-reported employment histories for those with LinkedIn accounts, the talent war between Facebook and Google has been widely reported in recent years. Documents that emerged in the Silicon Valley wage-fixing case involving Google and its peers revealed that Google instituted a policy in 2007 to make counteroffers to employees recruited by Facebook.

Thomas Claburn has been writing about business and technology since 1996, for publications such as New Architect, PC Computing, InformationWeek, Salon, Wired, and Ziff Davis Smart Business. Before that, he worked in film and television, having earned a not particularly useful ... View Full Bio
We welcome your comments on this topic on our social media channels, or [contact us directly] with questions about the site.
Comment  |
Email This  |
Print  |
RSS
More Insights
Webcasts
What We Can Learn from Sports Analytics
Building the SOC of the Future: Next-Generation Security Operations
More Webcasts
White Papers
How to Prioritize Risk Across the Cyberattack Surface
The 2020 Duo Security Trusted Access Report
More White Papers
Reports
2020 State of DevOps Report
DNS Network Traffic Volumes During the 2020 Pandemic
More Reports