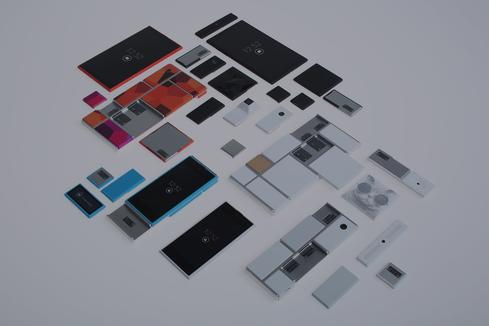 At the Computer History Museum in Mountain View, Calif., on Tuesday, the future attracted more attention than the past. Google held its first Project Ara developers' conference, and those in attendance got a glimpse of tomorrow's smartphones.

"Tomorrow" in this instance means January 2015. That's when the first Project Ara phone is expected to ship, priced at a mere $50. But you'll want to buy additional hardware modules.

Project Ara reimagines the smartphone as a collection of modules, each with its own function, that can be combined to suit the user's needs. Google intends to allow anyone to design these modules and order them from a manufacturer that will make them on demand. It's a hugely ambitious undertaking that has the potential to usher in the era of mass electronics customization and to reinvent the mobile industry. It could also be a flop. But that's a risk Google is willing to take.

Google is not alone in pursuing disruptive innovation, but it is uniquely positioned and motivated to shake things up. Its direct competitors in the computing market, Apple and Microsoft, tend to innovate within parameters that benefit their existing hardware and software businesses. Each has taken a page from Google's playbook in moving into cloud computing and advertising.

Google made its name in the advertising business, but it recognized early on that advertising is merely a form of information, and hardware and software direct the flow of information. With few challengers in online advertising, it can afford to challenge others in different fields. Amazon is following a similar path, though it is hampered by its reliance on retail sales, which incur more costs at scale than selling digital bits.

Because every business depends on information, Google has the opportunity to participate in just about any industry it chooses. And it is doing so with an eye toward rocking the boat rather than protecting established business models. One area where Google's innovation lags is in the advertising industry. Google is not eager to kill its golden goose; leave that to companies aiming to displace Google.

But beyond the world of advertising, Google is shooting for the moon. It has considered projects that many consider foolish -- a space elevator and a hoverboard, for example -- and has actually undertaken quite a few similarly ambitious research efforts.

Google dubs its approach "Moonshot" thinking, in a reference to NASA's Apollo program, which took US astronauts to the moon. That's a bit of an exaggeration in terms of funding -- the cost of the Apollo program would be well over $100 billion today -- but it's fair enough in terms of ambition. Google is aiming high.

Science fiction writer William Gibson once wrote, "The the future is already here -- it's just not very evenly distributed." Google is distributing the future. Take a look at what's coming.

Airline pilots and the FAA will love it? Much more sci-fi than driverless cars.
Reply  |  Post Message  |  Messages List  |  Start a Board
InformationWeek Is Getting an Upgrade!