As part of its mandate to provide a range of services to other federal agencies, the General Services Administration owns or leases 354 million square feet of office and warehouse space in 9,600 buildings, and it provides workspaces for more than 1 million federal workers. The problem: Half the time, those people are out in the field or working away from their desks. For a government agency that spends roughly $10 billion annually on leasing and construction costs, officials knew there had to be a smarter approach.

They moved toward a hoteling model, whereby employees check in and out of workspaces. However, that move required GSA to overhaul its IT infrastructure, says acting CIO Sonny Hashmi. Enter cloud computing.

Beginning in 2010, when cloud computing was still mostly a vision for federal policy-makers, GSA officials, including Casey Coleman, the CIO at the time, crafted a multiyear strategy to migrate core agency systems to the cloud.

GSA started by migrating 17,000 employees to Google Apps, making it the first federal agency to move basic email and collaboration services entirely into the cloud. GSA officials now expect that migration, completed in July 2011, to save it $15 million over five years.

In August 2011, GSA launched the second phase of its "Drive to the Cloud" initiative.  Working with Salesforce.com, it implemented cloud-based software that made it easier for GSA employees to collaborate on projects, share and manage case files, find internal experts, and capture new ideas. GSA now has an enterprise social network with 10,000 users across 1,000 communities of interest. 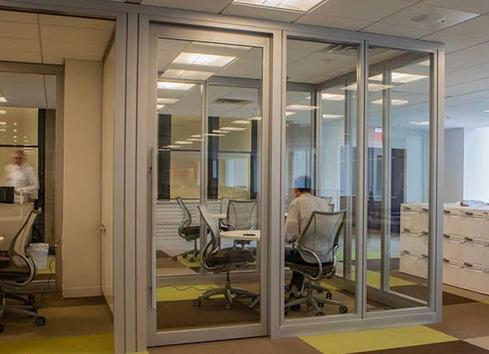 GSA headquarters dispenses with offices in favor of flexible workspaces that employees and visitors can work from wirelessly.

On one occasion, employees used the network to generate 640 ideas in 30 days to streamline GSA business processes, an initiative that eventually saved the agency $5 million annually, Hashmi says. GSA's project management dashboard offers a glimpse of those improvements. It lets any employee follow or contribute to a GSA project, track its costs and schedule, and link to planning and budget documents.

GSA also established a rapid application development platform in the cloud, launched in the fall of 2011. Within six months, GSA's IT shop developed and delivered "more than 100 enterprise applications with zero infrastructure footprint," replacing more than 1,700 legacy applications, Hashmi says. GSA developers reduced the average time to deliver an application by 75%, to an average of six weeks, he says, and lowered the total cost of ownership for a midtier application by 92%.

GSA now has begun the third phase of its cloud strategy, migrating core parts of the agency's storage, compute, and other infrastructure to the cloud. Hashmi estimates that 80% of GSA's IT systems now have a cloud component.

Moving to the cloud didn't just streamline IT operations; it also improved business operations by automating a wider range of processes. In one instance, GSA migrated a high-volume call center to the cloud in less than six months, cutting $1.5 million in annual support costs.

The lessons GSA learned in moving to cloud services -- acquiring the services, dealing with security, developing shared services, integrating mobile computing, consolidating datacenters -- are also paying dividends, Hashmi says. GSA proved that the cloud is a viable and scalable option for other federal agencies and can deliver more for less. GSA will spend $593 million on IT in fiscal 2014, nearly $100 million less than the year before, according to White House budget figures.

GSA officials are making cloud project-management artifacts, application development processes, and governance structures and templates available for other federal agencies, Hashmi says. Meantime, GSA has released under an open-source license all of the applications its developers created, letting state and local governments build on the agency's work.

The larger lesson Hashmi and GSA learned is recognizing that "migration to the cloud is not a project, it is a strategy," he says. "This is not an IT problem. Folks from acquisition, security, compliance, accessibility [for the physically impaired], records management all have to come together."

What GSA is still learning, he says, is how to forecast demand, which is very different in the cloud than with traditional IT, where you look mostly at licenses and capacity on what you own. "With the cloud," he says, "the forecast is based on consumption, not provision or on how many servers you have. If you're not careful … you may not be using the cloud in a optimized way."

But Hashmi adds: "It's easy to find reasons not to go down this road. You can't perfectly plan your way through a disruptive path like this. You have to trust you have the right people in the room and be open to failing fast and adjusting. We were fortunate to have that freedom."

Wyatt Kash is a former Editor of InformationWeek Government, and currently VP for Content Strategy at ScoopMedia. He has covered government IT and technology trends since 2004, as Editor-in-Chief of Government Computer News and Defense Systems (owned by The Washington Post ... View Full Bio
We welcome your comments on this topic on our social media channels, or [contact us directly] with questions about the site.
Comment  |
Email This  |
Print  |
RSS
More Insights
Webcasts
The Threat From the Internet - and What Your Organization Can Do About It
How Secure is Your Azure Cloud Security Environment?
More Webcasts
White Papers
Securing IT & OT in Industrial Environments
Ransomware Response Report: Trends & Outlook
More White Papers
Reports
Making the Financial Case for Outsourcing Endpoint Protection
Collective Offense Calls for Collective Defense
More Reports

The more cloud computing matures, the more the conversations seems to focus on rethinking business processes supported by IT as a Service. What's interesting about GSA's story is the degree to which GSA leaders saw the business processes it wanted to change -- namely to reallocate workspace as an on-demand service -- and saw how the cloud could get them there. It's a good example of cloud solving a business problem, not simply being a cheaper way to do IT -- and one that busineses, not just government agencies, would do well take a closer look at.
Reply  |  Post Message  |  Messages List  |  Start a Board
Editors' Choice
Hot Topics