The hospital group overhauled its tech strategy to boost data usage, patient health, and collaboration between business units and the IT organization. One of eight Elite 100 Business Innovation award winners.

Six years ago, Hoag Memorial Hospital Presbyterian was using 325 largely unconnected applications to run the hospital system, and IT was more of a "service center" than a business partner. Today, employees can look at the surgery dashboard, for example, which draws on multiple systems to show information such as patients' waiting time and their time spent in-suite. These metrics are fed into a data warehouse, which translates the data and presents it in a user-friendly format on a dashboard built using QlikView.

This kind of data-driven business strategy doesn't work without cultural as well as technological change.

Senior VP and CIO Tim Moore has been driving this cultural change as the IT organization transforms how applications are used and moves Hoag toward a new position as a data-driven organization. It's facilitating closer collaboration between business units and IT teams. If professionals can learn more about why patients are dissatisfied, says Moore, they can improve their services.

Another powerful use of dashboards comes in managing specific conditions such as sepsis, a potentially life-threatening complication from infection. The Sepsis Protocol Compliance dashboard monitors adherence to clinical protocol during the critical six-hour window after which a patient has contracted an infection. This has resulted in a 14% decrease in the most severe form of sepsis at the hospital, as professionals start treating sepsis before it evolves.

The Case For Data

Moore set out to revamp data usage through a system overhaul, which included the implementation of an integrated enterprise platform made up of linked hospital applications. The apps feed into a data warehouse, which generates dashboards and reports for employee use. 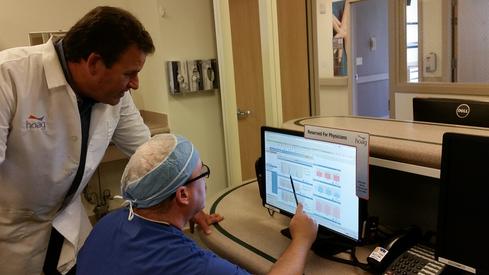 The project required support from senior business executives, which is where Moore met his first roadblock. Intense data usage was not yet common practice at Hoag.

"The largest challenge was the education and the buy-in," he says. "We were showing them an object they didn't know they had a need for." The process required multiple explanations to convince senior hospital staff, most of whom thought, "We're doing okay, we're not losing money, why spend $4 million for this kind of data?"

"There was a solid year of education," he says, before the project got started.

The Road To Transformation

Over the past year, a primary goal for the hospital has been to make healthcare more affordable by improving clinical outcomes and offering lower-cost services. The integrated enterprise platform and enhanced use of data are helping make this possible. A presentation layer within the platform lets staff better understand the data that results from their processes through user-friendly dashboards.

After securing buy-in, the next step in platform development was enabling technologies approved and funded by Hoag's board of directors. The platform's tech stack includes an Oracle database, Informatica data integration engine, IBM InfoServer for data governance, QlikView presentation layer, virtualized servers, and system integration points such as data feeds from administrative, clinical, and financial systems in addition to other internal and external data sources.

Hoag's IT team whittled its app collection from 325 to 275. From there, they integrated mission-critical, or "tier one" apps, to feed into the data warehouse, which turns it into understandable and actionable information. Employees can see, for example, how long a patient was waiting and how it correlates with their overall satisfaction level, even though those measurements may come from two separate applications. An employee can then take steps to improve performance where it is lacking.

Any employee -- from medical specialists to businesspeople -- can make inferences on data from previously unconnected and unrelated systems, Moore explains.

"With minimal training -- an hour, max -- almost anybody can use the product very effectively," he says of the data-driven dashboards. The Clinical Effectiveness dashboard, another example, compiles data around financial and patient satisfaction metrics. By analyzing this type of data, Hoag has cut average length-of-stay by 6.5% and direct cost per discharge by 6%.

"Healthcare is rapidly transforming," Moore says. "We, too, now have to measure everything we do."

Moore, who was recruited to change the vision of IT at the hospital, says that the IT department was considered more of a "service desk" and less of a business partner upon his arrival. "I'm not going to be the IT guy that teaches everyone how to use the system," he says. "I'm going to teach them what a business partnership is."

In the collaborative model, IT works alongside business and medical divisions to solve problems with technology. Rather than install a solution and deem it "ready to use," IT allows employees outside the department to help design systems used throughout the hospital.

Hoag's electronic health record (EHR) system, for example, was implemented in 2005 and used by just 2.5% of clinicians by the time Moore came onboard in 2009. Rather than take charge of redesign, Moore gave authority to the clinicians who use the system and served as an advisor during the project. The clinicians designed the EHR according to their needs, within the boundaries of what the system could do. When it relaunched, system use jumped to percentages in the high 90s.

"We put our clinicians in positions of leadership," he says. Members of the nursing staff, for example, lead IT innovation groups to ensure the tech team is developing tools that are easy to use and will really help them in their daily work.

In terms of extracting data capabilities from hospital applications, the system integration project is about 90% built out, says Moore. That said, this initiative does not have a definitive finish line.

"In healthcare, there is an undefined destination," says Moore. "Nobody today could say what the destination is, but the journey is going to be ongoing." Next on the agenda: enhancing Hoag's data stores with information outside its ecosystem to continue improving on population health.

Kelly Sheridan is the Staff Editor at Dark Reading, where she focuses on cybersecurity news and analysis. She is a business technology journalist who previously reported for InformationWeek, where she covered Microsoft, and Insurance & Technology, where she covered financial ... View Full Bio
We welcome your comments on this topic on our social media channels, or [contact us directly] with questions about the site.
Comment  |
Email This  |
Print  |
RSS
More Insights
Webcasts
Using MS Teams as Your Phone System - FREE Event 4/14
Cybersecurity Risk Management
More Webcasts
White Papers
2020 SANS Enterprise Cloud Incident Response Survey
The Top 5 Mistakes Everyone is Making in Vulnerability Remediation
More White Papers
Reports
Gartner Market Guide for Insider Risk Management Solutions
Trustwave Global Security Report
More Reports