Forget "disruption." The most innovative companies in our annual ranking go digital in two main ways.

"Digital disruption" is the term du jour, but I have two big problems with it.

One, it evokes an image of a sudden event, like a rival bursting onto the scene and threatening your company's marketing standing, when the real threat is the slow but relentless digital drive of rivals that at some point leaves legacy players at an impossible disadvantage.

Two, it suggests that "digital" is some singular weapon, or a singular channel like e-commerce. Instead, digital business, particularly for established companies, describes the more systematic process of choosing where and how to apply new digital technologies and business approaches -- and where to avoid them.

Here are a few examples: Kroger is using people-counting sensors at its grocery store cash registers to alert managers when lines are piling up. Merck is using new data collection and analysis models to improve the reliability of its vaccine manufacturing process. Capital One lets credit card customers convert a cash purchase of a plane ticket to one using reward points, even months after the buy, with a feature called Purchase Eraser.

These examples show digital business woven into everyday operations, and it's examples like these that we celebrate in our just-announced InformationWeek Elite 100 awards. (As the name suggests, the Elite 100 is our more-selective annual ranking of business technology innovators, a successor to the InformationWeek 500 ranking that we've done the previous 25 years.)

Think of digital business's impact in two big ways: providing a better product to customers, or cutting the cost of delivering it. Two data points from our survey of InformationWeek Elite 100 companies shine a light on how IT leaders are thinking about those two areas. We asked the Elite 100 companies which of eight factors are among the top three ways they'll use technology to innovate this year.

Two responses fall in the "provide a better product" category: 48% will introduce new IT-led products or services; 25% will create a new business model or revenue stream. In the first case, companies seem to be infusing digital elements into the offerings they already have. In the second, much-less-common case, companies are getting into an entirely new product segment or market using digital technologies. 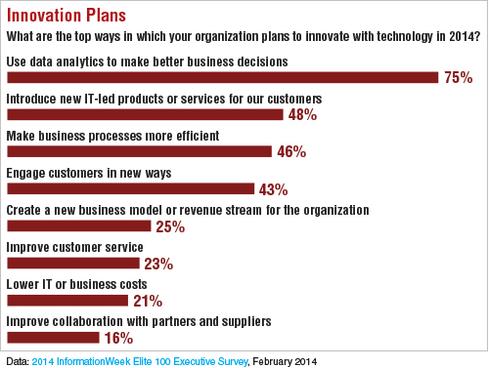 In the cost-cutting category, technology plays an almost equally important role: 46% of Elite 100 companies are using technology to make business processes more efficient, and 21% are doing so to lower IT or business costs. Consider Martin Marietta Materials, a supplier of crushed stone and gravel used to build roads. There's nothing digital about that product. But the company created an automated weighing and payment system that lets it run some of its lesser-used quarries with no checkout staff. Doing so lowers costs enough to make some quarries viable that otherwise wouldn't be.

The other main focus of our Elite 100 research is technology tactics -- especially in mobile, analytics, and cloud services. Here's what we learned this year:

However, just 15% are running a true hybrid cloud -- meaning they can switch between an in-house datacenter and a public cloud service from the likes of Amazon, Microsoft, or Google. Forty-three percent of Elite 100 companies say they have no plans to do that. Twenty-six percent allow IT services to be provisioned without the IT department's involvement, and just over a third have no plans to allow that. The picture we get is that company-owned datacenters and public cloud infrastructure remain two important-but-separate resources.

Use of platform-as-a-service is high among Elite 100 companies, with 50% using PaaS and 18% testing it. In last year's InformationWeek 500 survey, only about a quarter of companies had adopted PaaS. We would expect the innovators in our Elite 100 ranking to be more advanced with PaaS, but uptake appears to be growing.

To me, that just shows me how far we've come with BYOD -- three, four years ago it was FAR from a given that you could access your work email on your personal device, especially if you were in a financial services company.