Could open-source hardware shake up the datacenter the way Linux disrupted software? From Facebook to Fidelity, a few big companies say this concept works.

Facebook, Fidelity, Goldman Sachs, and other leading IT users think the open-source movement is ready to shake up the hardware industry the way Linux did in software.

In the past, only the very biggest companies -- the likes of Amazon, Google, and, yes, Facebook -- could afford to customize servers, storage, and networking systems to their precise needs. Instead, most companies have filled their datacenters with off-the-shelf, mass-produced hardware from the likes of Hewlett-Packard, IBM, Dell, Cisco, and Oracle.

But an open-source initiative called the Open Compute Project is trying to upend this hardware production process in two ways simultaneously. First, Facebook and other companies are sharing their hardware designs through OCP. Such sharing could put leading-edge designs in the hands of many more user companies. Second, shared hardware specs let IT organizations mix and match parts from different suppliers, which opens hardware manufacturing to new players. As a result, open-source hardware could produce significant new competition for existing hardware vendors -- and a new bargaining chip for buyers.

Open-source software such as Linux, Apache, Python, and Android rewrote the rules of the software industry. With open-source code, any company can take, say, a Linux operating system and alter it exactly for its needs. Linux by no means put an end to proprietary Windows server software in datacenters, but it made for fierce competition (and for a while, considerable anxiety in Redmond). Open-source Apache software, meantime, became the dominant web server software. Android is now the market-leading operating system for smartphones just six years after Google launched the open-source OS.

Open-source hardware, on the other hand, still has everything to prove. Is Open Compute at the cusp of doing for hardware what open-source code did for software -- make a valuable technology asset available to a much broader set of developers and users, while lowering the usage costs? Or is the project caught in a cloistered community, one that helps Facebook burnish its image as a tech innovator while benefiting only a handful of financial services and other companies with massive computing needs and tech-savvy staffs?

Fidelity is among the true believers. The investment giant is rebuilding its IT operations around a private cloud datacenter architecture, and it's embracing OCP-inspired hardware as part of that change. OCP designs now account for a third of Fidelity's servers, and George Brady, executive VP of IT, expects that figure will grow to 80%. HP and Dell designs will provide the other 20%.

Fidelity has been moving away from Tier 1 suppliers to custom or "white box" suppliers such as ZT Systems, Avnet, Penguin, and Hyve, Brady says. The prices Fidelity pays for servers have declined 50% over the 2-1/2 years since the company started buying OCP-inspired systems from the custom builders, he says.

Goldman Sachs, like Fidelity, joined OCP when it was founded in April 2011, but it's not as far along in putting OCP systems into production. The co-head of Goldman Sachs's technology division, Don Duet, says he doubts that OCP, still in its toddlerhood, deserves much credit for reducing server prices at the firm, since hardware prices were already in a steep decline. 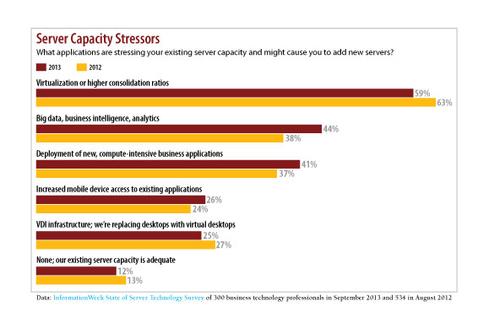 It started at Facebook
The Open Compute Project began around designs for stripped-down motherboards for servers in Facebook's datacenter. It has expanded to designs for servers, racks, network switches, and even the design of the entire datacenter itself.

In one simple example, Facebook's IT hardware dispenses with the manufacturer's logo on the front of legacy servers -- the "vanity plates," as Facebook's Frank Frankovsky, VP of hardware design and supply chain operations and Open Compute's founder, puts it. Such adornments impede the airflow needed to cool redesigned server motherboards, and they only add cost.

Frankovsky's team is responsible for placing these servers in Facebook's massive datacenters in Oregon, North Carolina, and Lulea, Sweden. Other huge web companies such as Amazon and Google also design their own hardware, but they keep those designs secret, believing their engineering provides competitive advantage. Facebook's leap of faith is that by sharing its hardware designs, it can get more volume and new ideas behind those designs, and thus lower the overall cost of generating computing power to run its social network.

OCP backers have formed a well financed foundation and attracted a community of contributors around seven hardware projects. (See opencompute.org/projects.)

Participants in OCP include chipmakers Intel and AMD, which have produced designs for Decathlete and Roadrunner motherboards, respectively. Servers based on the motherboards are available from several manufacturers, including HP and Dell. Or a company can choose a design from among several OCP specs and hire a manufacturer to build custom servers based on it. That option is slowly giving rise to a new class of manufacturing from little-recognized manufacturers, threatening to disrupt the big three of HP, Dell, and IBM. The triumvirate commanded almost two-thirds of the x86 server market in third-quarter 2013, according to IDC. (IBM is in the midst of selling its x86 server business to Lenovo for $2.3 billion, precisely because it's low-margin.)

When Linux and other open source software moved into a market, incumbent proprietary software vendors were generally soaking up fat profit margins and enjoying rising prices. Commodity server prices are falling and the margins are such that IBM is bailing out of the x86 business. Is there enough financial incentive to switch to open hardware?
Reply  |  Post Message  |  Messages List  |  Start a Board

Does post-Snowden IT security auditing play a role in the appeal of OCP designs? I would think that with the paranoia about the potential for intelligence agencies to subvert hardware, open source designs would be a requirement as a matter of due diligence.
Reply  |  Post Message  |  Messages List  |  Start a Board

Charlie, in your view how long until open source hardware moves from the domain of very big, engineering-focused companies (such as Facebook and Fidelity) to most businesses with a competent IT organization?
Reply  |  Post Message  |  Messages List  |  Start a Board

Not suprising that Fidelity's experience is not music to Dell's ears. Of course financial service IT has more financial resources (and political capital) than is the case in many other verticals. It will be quite interesting to see if innovative IT teams in other verticals choose to mimic what Fidelity has done. How hard would it be to do this kind of revamp at your company?
Reply  |  Post Message  |  Messages List  |  Start a Board
InformationWeek Is Getting an Upgrade!