The 'Internet Of Me' Is Getting Real In Healthcare - InformationWeek

0%
Tweet
Biogen's Andi Karaboutis believes medicine is about to get much more personal.

Automobiles and computers may be complicated machines, but they pale in comparison to the human body. The challenge of working in an industry committed to that complexity brought Adriana (Andi) Karaboutis from Dell, where she served as CIO, to join Biogen as executive VP of technology.

Speaking at the InformationWeek Conference at Interop in late April, Karaboutis argued that the age of biotechnology has arrived.

"Biotech has progressed to the point where we're actually able to edit or code DNA …," said Karaboutis, characterizing the intersection of biology, information technology, and data as massive opportunity.

In the past five years, the FDA has approved an unprecedented number of drugs, 44 in the last year alone. "Steve Jobs was quoted as saying the biggest breakthroughs of the 21st century are going to happen at the crossroads of biology and technology," said Karaboutis, adding that she sees these breakthroughs happening in the progress being made to provide treatments for so-called orphan diseases and in the approval of new drugs. 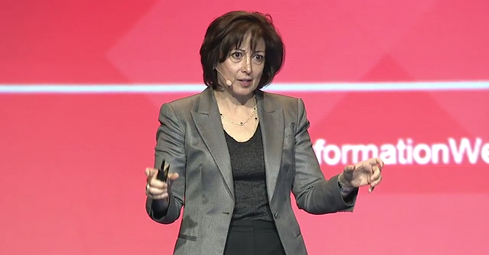 The combination of computing power and health research will lead to the "Internet of Me," Karaboutis said, in which treatments become more effective through personalization.

As an example of the benefits of personalization, she recounted her own struggle with hyperthyroidism, or Grave's disease, over a decade ago. The treatment prescribed by two different doctors, iodine ablation, left her feeling ill. Eventually, a doctor at the Mayo Clinic recognized that she was receiving too much iodine.

"She said we've done some more stratifications to this normal range, and for your height and weight, you're just taking a little too much," Karaboutis recalled. "… Within three weeks I was back to normal, because my normal range was a very different tail of the bell curve."

Everyone is going to expect this level of personalization: "I don't want to be treated based on what the averages are, because I happen to be very unique," said Karaboutis.

Technology Must Connect In New Ways

Connected technology in the context of healthcare provides the opportunity to gather the data necessary to create such personalized treatments. "It's about the Internet of Me," Karaboutis said, citing partnerships with Google and FitBit designed to help multiple sclerosis patients. "That's where we're going with this industry [in terms of technology]."

At Biogen, traditional enterprise IT functions continue to be important, said Karaboutis, but the mandate for the technology organization extends to enabling the scientific and computational work that improves people's lives.

"Healthcare is changing," said Karaboutis. "It's no longer about treating symptoms. It's about outcomes." 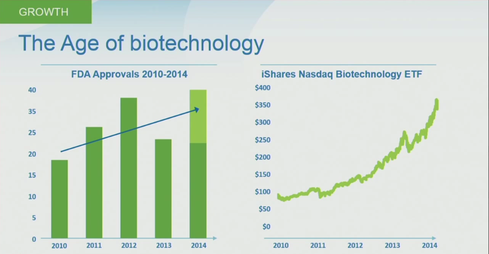 Supporting that goal as a technology organization isn't necessarily straightforward. Karaboutis says the IT group has to understand the study of science and the cultural differences between technology and science. "I come from a world where you reduce the alternatives, you make a decision, and you go," said Karaboutis, referring to her time in the automotive and computer industries. "Scientists don't like to reduce their alternatives."

Technology may enable innovation, but as Karaboutis sees it, it's not calling the shots.

"Technology is not the long pole in the tent in this industry," she said. "It is making sure that our regulatory, our privacy, our practices, and our culture are right there together. From a technology perspective, we've got a lot we can use. It's how much can be put into practice."

Thomas Claburn has been writing about business and technology since 1996, for publications such as New Architect, PC Computing, InformationWeek, Salon, Wired, and Ziff Davis Smart Business. Before that, he worked in film and television, having earned a not particularly useful ... View Full Bio
We welcome your comments on this topic on our social media channels, or [contact us directly] with questions about the site.
Comment  |
Email This  |
Print  |
RSS
More Insights
Webcasts
Cyber Attack Evasion Techniques
The 6 Must-Haves for Practical Cloud Security
More Webcasts
White Papers
6 Emerging Cyber Threats That Enterprises Face in 2020
Digital Transformation Built on the Cloud
More White Papers
Reports
How Enterprises Are Developing and Maintaining Secure Applications
Assessing Cybersecurity Risk in Today's Enterprise
More Reports

No doubt healthcare is the biggest area where data can lead to bigger and better innovations.  According to the CSC CIO Survey, 75% of respondents believe analytics and big data has a positive impact on productivity and efficiency — with the healthcare industry at the front of the pack at 90 percent. Likewise, healthcare CIOs see the biggest impact on innovation. We just need to keep fueling the fire.  Peter Fretty, IDG blogger working on behalf of CSC
Reply  |  Post Message  |  Messages List  |  Start a Board


"Healthcare is changing," said Karaboutis. "It's no longer about treating symptoms. It's about outcomes."


I can't wait unitl this becomes a reality. I always have a hard time when I go to the doctor's with a fever. I run low, closer to 96.8 not 98.6, so 100 degrees F for me is rather high, but since they mentally calculate a 1.4 degree difference from 'normal' instead of the closer to 3.2 degrees, they just shrug it off. I'm sure there are other things where I am anything but average and therefore need a different treatment than the average person.


At the clinical level, the "Internet of Me" and Precision Medicine is called functional medicine and biologic dentistry. We are already doing it, and getting healthier, if we are lucky enough to have found it, after being unlucky enough to have gotten misery and mystery chronic diseases.

It focuses on the individual's genetic code and toxins, like the reading the owner's manual and combining diagnostics-indicated and routine service to keep your car humming, or your musical instrument in tune. Gunk and gum them up, and the motor, ride, music, and life is not so sweet.

For the 20%-40% of the population who do not methylate i.e. clear toxins well - the numbers increase as we age - it means Christmas isn't coming, the Grinch stole our bodies, brains, cells, health, vigor, youth, memories, mobility, moods, and soul.

So let the Administration and Congress first fix the biggest health problem hiding in plain sight as Job One - the medieval regulations governing installed medical and dental devices. Let the Grinch's heart, and our health, grow three sizes that day.