Virtualization and cloud computing are creating the most significant shift in datacenter design in 25 years, VMware CEO Pat Gelsinger will tell Interop audience in keynote address.

VMware CEO Pat Gelsinger says virtualization and cloud computing have produced a "tectonic shift" in IT operations that will result in software-defined datacenters replacing hardware-defined datacenters. That will be the main topic of his keynote address on April 3 at the Interop conference and exhibition in Las Vegas. 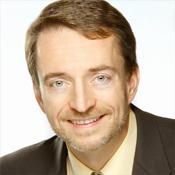 Gelsinger, who has been CEO for two years, said the shift toward hybrid cloud computing is producing "a tipping point" where customers are much more receptive to hearing about VMware's approach to hybrid cloud computing, vCloud Hybrid Service. But more significantly, perhaps, it's also increased interest in VMware's virtual networking, the NSX Platform. While eBay representatives appeared on stage at VMworld with Gelsinger and VMware chief network architect Martin Casado last August to endorse the concept, Gelsinger will bring two new adopters on stage at Interop: the online gaming company Nexon and the US Department of Agriculture.

Gelsinger called them contrasting users that could each speak to different merits in the virtual networking platform and how it can assign appropriate network resources to virtual machines as they get configured.

[Want to learn more about VMware's approach to the software-defined datacenter? See VMware Datacenter Growth Far From Over.]

Representatives of another customer, the Canadian airline WestJet, will be brought on stage "to talk about the network security platform they see emerging" as part of virtualized networks. One of NSX's key attributes is "the breakthrough in its ability to bring security into the network," said Gelsinger. In the past, an application often understood the security that it needs to operate, but had no power to impose it on the infrastructure. The network and other infrastructure elements have the power to enact security, but they don't know the application's context.

"Virtual networking sits in there between those two" and can bring the application context forward to help set security policies for a network about to be assigned to the application, Gelsinger told us. Those policies can govern the degree of isolation that the network enjoys and the settings on the application's firewall.

The NSX Platform approach allows VMware to both compete with a major network infrastructure provider, such as Cisco, and collaborate with it. Many different types of network equipment may be incorporated into an NSX Platform. Palo Alto Networks is building firewalls that work on top of NSX. HP has already demonstrated how its network controller can work with NSX in a federated virtual network system. Symantec puts its network security parameters and policies on top of NSX, according to Gelsinger.

In a similar fashion, VMware has introduced Virtual SAN as a new tier of storage in the datacenter. It's there, not as a replacement for more traditional forms of storage, but as a virtualized resource on the server rack and "tightly coupled" with the virtual machines running on the rack. Virtual SAN storage will be able to show high performance in virtualized environments because it's close to the servers running virtual machines, but it can't replace "large Tier 1" storage devices and arrays. Virtual SAN was announced as generally available March 11.

VMware recently announced that its fifth vCloud Hybrid Service datacenter opened in Slough, UK, outside of London, and that it will soon open another. It has four in the US. The company plans to expand the service and the number of datacenters in Europe, because different European countries have differing laws regarding storage of data within their borders. VMware is likely to try to operate two datacenters each in Germany, France, and the UK, as well as expand into the principal countries of Asia, said Gelsinger. Although he declined to put a number on VMware's datacenter plans, it sounded as if the number of vCloud Hybrid Service centers will double before the end of the year.

It seems clear that there is a rapid reorganization taking place in datacenters based on the ability to make use of virtual resources. "The most significant architectural shift in the last 25 years is nigh upon us," he said.

Charles Babcock is an editor-at-large for InformationWeek and author of Management Strategies for the Cloud Revolution, a McGraw-Hill book. He is the former editor-in-chief of Digital News, former software editor of Computerworld and former technology editor of Interactive ... View Full Bio
We welcome your comments on this topic on our social media channels, or [contact us directly] with questions about the site.
Comment  |
Email This  |
Print  |
RSS
More Insights
Webcasts
Managing a Hybrid Cloud Infrastructure
Advancing the Hybrid Cloud & App Modernization Journey with IBM
More Webcasts
White Papers
2020 SANS Enterprise Cloud Incident Response Survey
The Top 5 Mistakes Everyone is Making in Vulnerability Remediation
More White Papers
Reports
How Data Breaches Affect the Enterprise (2020)
DNS Network Traffic Volumes During the 2020 Pandemic
More Reports

Virtualization's march into the data center has been relentless. About two-thirds of applications are now running virtualizred at many sites. It's hard to convince hold outs that there are advantages to running the database system as a virtualized system but there are.
Reply  |  Post Message  |  Messages List  |  Start a Board

It seems like, as when server virtualization was first going mainstream, legacy enterprise applications and databases are still sticking points. Who would have thought so much would still be on bare metal at this point?
Reply  |  Post Message  |  Messages List  |  Start a Board
Editors' Choice
Hot Topics