After leaving a healthcare firm, Karenann Terrell, the CIO of mega-retailer Wal-Mart, found that data analysis at the company is "at a much higher level of sophistication than I had expected."

Wal-Mart CIO Karenann Terrell offered glimpse of what it's like moving from a $15 billion healthcare company, Baxter International, to executive vice president and CIO of the $500 billion retailer in a talk on Tuesday at the InformationWeek Conference in Las Vegas.

After formal remarks, a former colleague from the pharmaceutical industry asked Terrell what was different between her previous job at Baxter and Wal-Mart.

"I expected a pervasive use of data in order to drive the business process," at Wal-Mart, Terrell responded. "I have seen it at a much more significant level of sophistication than I had expected. That's one advantage of scale at Wal-Mart." 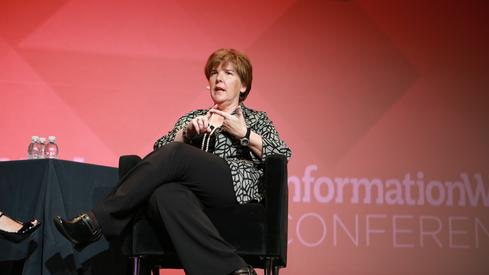 Data drives inventory systems for the movement of goods and placement of goods in individual stores, in an effort to ensure merchandise will be available where the demand occurs. Terrell continued that Wal-Mart collects large amounts of data that it needs to constantly analyze in order to stay abreast of retail trends.

"The thing I underestimated was the speed at which customers are changing in the retail business … the expectation of the customer to simplify the (shopping) experience, and especially the speeding up of the mobile experience. The patients at Baxter, not so much," she said.

[Want to learn more about responding to a breach? See How To Develop A Data Breach Incident Response Plan.]

In a footnote to the proceedings, she also compared her former home city of Chicago to Bentonville, Ark. "The quality of life in Bentonville is fantastic. It's a little known place with a fantastic amount of talent."

At one point, Terrell referred to modern Wal-Mart systems versus "classic" rather than legacy systems, explaining the choice of words this way: "Classic is respectful of the people who are actually going to be keeping the lights on," as new business applications are underway. "We don't have a choice about alienating people with language. Does anyone here believe they have all the talent they need? Let me know, 'cause we're interested in your talent," she said, and laughed, knowing there'd be few takers.

The process of modernizing legacy systems is also underway at Wal-Mart, but Terrell said if she put a date on when it would be done, she'd be wrong.

"Our classic environment -- the minute we roll through a modernization of that, we'll see new trends in technology and new capabilities emerge," Terrell said. "I think we're just in a continuous build-and-operate cycle now. I think that probably it's a lifelong venture …" At another point, she said the technology that her industry uses is constantly getting revised: "Think technology just has to be viewed as a continuum."

Wal-Mart is trying to modernize the backend systems that run 11,000 stores serving 250 million customers a week. "A primary motivator for us is the need for us to win, compete, and serve at the intersection of the digital and physical. Consumers want a frictionless experience," she related. In addition to the customer experience, Wal-Mart is constantly trying to lower the cost of technology used in each business unit to serve an overall goal of offering low prices to consumers.

Terrell has a policy of rotating her IT staffers through different requirements from the business, giving them exposure to the nature of logistics, point of sale systems and general ledger accounting.

"Change in technology is something you have to experience from multiple different aspects … We have people that move across store systems from point of sale to the back office and into inventory management," Terrell told the audience.

Despite its size, Terrell insists Wal-Mart IT be able to implement systems rapidly and fix them quickly if things go wrong. It's part of how such a big chain survives smaller and lighter-footed competition. "The one protection that we really focus on at Wal-Mart is speed … That means you're willing to try things. I know I'm looking at a lot of skeptical faces," she said from a stage that allowed her to view 150 of her peers.

By speed, Terrell was referring to IT's ability to implement new software quickly without disrupting production systems or implement new code in production systems themselves. "Imagine trying to roll out a point of sale change. If we were not expert at rolling it out and pulling it back, or rolling it out and fix, we would be releasing once or twice a year against our 100,000 of point of sale systems," she said.

Meantime to recovery from a roll-out gone awry is an important stat to her. With the speed-oriented approach, failures are going to occur. What's important is knowing how to recover quickly from a failure, she said.

But one of her most interesting anecdotes was in response to the question, "What did Wal-Mart learn from the breach at Target?"

"What Target taught the industry was you cannot have any single point of failure that you are not expecting to result in some vector of breach." Target attackers ignored the usual routes of attack and found a way to siphon information from of point of sale data collectors. Terrell said the only adequate defense was defense-in-depth, with system operations and network traffic patterns monitored for unusual or out-of-compliance behavior.

Experiencing a breach, Terrell said, "that goes on undetected for a period of time just exponentially changes the damage that occurs. The public impact and reputational piece went beyond what any of us would have expected. The first mover (Target) was very deeply affected."

Wal-Mart has learned to run monitoring applications that watch actions on the network and data movements between internal systems. It's learned to keep a "white hat" tester, scrutinizing its code on a continuous basis and looking for weaknesses before an intruder appears, she said.

Retailers like Wal-Mart have parts of their operations that look a lot like a bank, she added. "For that and other reasons, it must maintain vigilance against malicious insiders … as the most dangerous vector."

Charles Babcock is an editor-at-large for InformationWeek and author of Management Strategies for the Cloud Revolution, a McGraw-Hill book. He is the former editor-in-chief of Digital News, former software editor of Computerworld and former technology editor of Interactive ... View Full Bio
We welcome your comments on this topic on our social media channels, or [contact us directly] with questions about the site.
Comment  |
Email This  |
Print  |
RSS
More Insights
Webcasts
Making XDR Work in Your Enterprise - May 12
How the Rapid Shift to Remote Work Impacted IT Complexity and Post-Pandemic Security Priorities
More Webcasts
White Papers
Cisco Threat Response
World Wide Technology: Digital Transformation Customer Journey
More White Papers
Reports
Planning Your Digital Transformation Roadmap
Dark Reading Report: Battle for the Endpoint
More Reports

CIO Terrell's remarks show how deeply even those retailers with a good handle on security were smitten by the damage of the Target breach. They don't want the same thing to happen to their companies, even though they think they've got all the bases covered. It take's just one, unpredictable, successful attack vector, as Terrell is clearly aware.
Reply  |  Post Message  |  Messages List  |  Start a Board
InformationWeek Is Getting an Upgrade!