55 comments
Comment Now
Tweet
As BASIC, the programming language that launched many a technical career, turns 50, we revisit our BASIC projects. Tell us about yours.

Although there are many modern programming languages better suited to today's technology -- Python and Lua are personal favorites -- BASIC still matters to many who write code. And it matters as an example of openness.

BASIC was developed by John G. Kemeny (1926-1993) and Thomas E. Kurtz (1928-), who described it as an effort "to give students a simple programming language that was easy-to-learn."

That goal of accessibility becomes ever more important as our devices and networks become more complicated. Without accessibility, we risk denying people the opportunity to create the technological systems that shape social, political, and economic interaction. BASIC invited everyone to tinker with machines that were previously tended by a mainframe priesthood. Its birth hastened the personal computing reformation.

BASIC debuted at 4 a.m. on May 1, 1964, when two BASIC programs ran at the same time on the General Electric 225 mainframe housed at Dartmouth College. Since then, it has given rise to many different versions and has played a vital role in computer education. 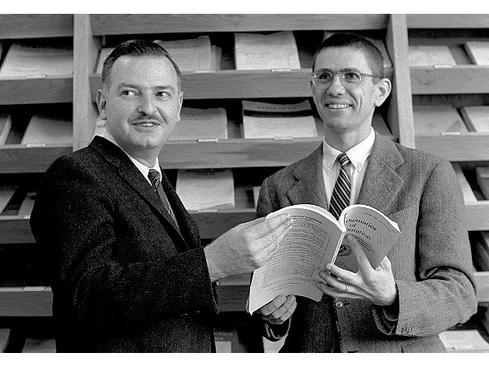 BASIC gave rise to Microsoft. The company's first product, Altair BASIC, written by Bill Gates and Paul Allen, was an interpreter for BASIC that ran on the MITS Altair 8800.

Kemeny and Kurtz's creation of BASIC not only made programming fun, it made the case for computer literacy as part of every educated person's life, said Michael T. Jones, chief technology advocate at Google, in an email. "They made that true at Dartmouth 50 years ago and it is true today the world over."

We have much to thank them for, said Jones. You could even say they started the open-source software movement. "By making the BASIC environment so friendly, they created a safe place for people to play and explore. The computer game movement came from BASIC. People shared games, long before there were networks, by printing the BASIC programs in Creative Computing and BYTE magazines for others to enter in and enjoy. Today we call it open source software but the origins date back fifty years."

"Many Google engineers have told me that their first introduction to computing was in BASIC, that BASIC is how they first saw the beauty and magic of programming," Jones continued. "No doubt this is true at other leading technology companies all around the world. This is the ultimate legacy of professors John Kemeny and Thomas Kurtz -- a world where the computer is a pleasant and helpful part of everyday life for billions of people."

A simpler time
For me, BASIC recalls a simpler time, when Apple was more open than it is now. I began learning BASIC in 1982 on an Apple II+, back when I was in high school. The following year, my friend Alec and I were deputized to teach BASIC under the supervision of our physics instructor, George Lang, to a handful of interested peers in a short-lived elective class.

Alec was the superior programmer (he knew Assembly Language) but BASIC was never intended for experts. The name stands for Beginner's All-purpose Symbolic Instruction Code. The language is so simple that anyone can pick it up with a bit of effort.

I never accomplished anything noteworthy with BASIC. Probably the biggest project I undertook was to write an application to assist the playing of Avalon Hill's Squad Leader, a favorite board game of mine at the time. But playing around with BASIC gave me an understanding of programming and technology that has informed my career over the years since.

Alec and I, faced with the desire to apply to college in a way that distinguished us from other applicants, turned our knowledge of BASIC into a school computer magazine that we called Interpreter. With the help of other friends who recognized the transcript-padding potential of involvement in our publishing venture, we turned out our first issue in June 1983. That was more or less the point I decided to focus on writing for people rather than machines.

We made our magazine before the era of desktop publishing. Imagine using X-Acto knives for layout. We ran a full-page ad from Beagle Bros., a maker of Apple II software that we admired, as a courtesy and to fill a blank page. The

BASIC was open in a similar way, designed to be operating system independent and hardware independent. Kemeny and Kurtz didn't patent it or protect it; they gave it away for free. That's worth remembering.

A few years ago, I got back into writing for machines, developing mobile games. BASIC made that transition much easier. If only it helped with marketing.

Charlie's start with BASIC
InformationWeek editor-at-large Charles Babcock had grand initial plans for his use of BASIC:

"BASIC was the second computer language that I attempted to use, probably in 1982 or 1983, after already having had a run-in with Waterloo Fortran. Some histories say BASIC authors John Kemeny and Thomas Kurtz were influenced by Fortran. But as a survivor of a university Fortran course, I felt as if I had walked out of calculus and into English Lit when I encountered the BASIC language.

"The commands looked so much like English. Their function was reflected in the meaning suggested by the characters. No one ever accused Fortran of that. With BASIC, I wasn't programming with a punch card deck on a university mainframe. I had my own computer, with the BASIC interpreter embedded in the machine.

"The long-awaited IBM PC was about to come out, but I opted for the remarkable Texas Instruments 99/4A, with its easily programmed graphics and ANSI-standard, TI BASIC. Texas Instruments was going to sell computers in the same manner as it had sold calculators, by offering superior features at affordable prices. I saw a big market developing, one in step with my burning interest in all the things that could be done with this new tool. And as a frustrated newspaper reporter, I started to think about ways to address the new age.

"I set to work learning TI BASIC and attempting my first program. The computer had a mere 256 bytes of scratchpad RAM, but if you could find one of the few tape recorders that was compatible, you could use it to hold up to 16 kilobytes of data and feed it into the machine -- 16,000 characters! What user would ever write a program bigger than that?

"I wanted to generate a game with interactive graphics for the families who would soon be buying the 99/4A. This was the age of the Atari, Commodore, and Radio Shack TRS computers. The TI model was programmable, contained a fast, 16-bit processor instead of 8-bit, and included a graphics coprocessor, everything a modern computer should have. I was in an upstate New York community, Vestal, surrounded by IBM families who were experimenting with their own home computers, in advance of the launch of the IBM PC. Many of them were using TI's. The future was clear: the IBM PC would be a business machine; the TI would be the preferred machine for home games and entertainment.

"So I set about creating a quiz-based program about our surrounding environment. When a child answered the question correctly, it triggered a bit of graphics activity illustrating the answer. If the answer was "the Erie Canal," then a mule appeared, pulling a boat along the canal. If the answer was "mountain lion" for the year an animal became extinct, then a pixelated hunter appeared, holding a long rifle. A bang announced his deed, a puff of smoke appeared at the end of the rifle, and alas, the last, somewhat chunky, mountain lion fell dead.

"I had barely gotten warmed up when I realized how few 16,000 characters really were. And another thing: BASIC was an interpretive language, good for beginner programming but poor at speed-drawing interactive graphics, even with the GPU. Everything took too long to run through the interpreter. It needed to be written in TI's Assembler, and TI maintained the 99/4A as a closed system.

"My gaming career was over before it began, and I left daily newspapers for a new life in technology journalism. But Kemeny's and Kurtz's BASIC introduced many people to programming concepts. They made real the notion that you didn't have to be a rocket scientist to make personal use of a personal computer. Borland's Turbo Basic, Microsoft's Visual Basic, and all the other Basics soon followed, along with many other languages invoking the lessons of Kemeny and Kurtz."

Those are our BASIC stories. Now we want to hear yours. Share your first experience or best memory of BASIC in the comments field. We have InformationWeek swag for the best story.

Thomas Claburn has been writing about business and technology since 1996, for publications such as New Architect, PC Computing, InformationWeek, Salon, Wired, and Ziff Davis Smart Business. Before that, he worked in film and television, having earned a not particularly useful ... View Full Bio
We welcome your comments on this topic on our social media channels, or [contact us directly] with questions about the site.
Comment  |
Email This  |
Print  |
RSS
More Insights
Webcasts
The Changing Face of Threat Intelligence
Protecting Mobile Apps and APIs from the Inside Out
More Webcasts
White Papers
Getting The Right Cloud Management
10 Principles of Database Security Program Design
More White Papers
Reports
An Insider's View into a Supply Chain Attack
2019 Threat Hunting Report
More Reports
Copyright © 2020 UBM Electronics, A UBM company, All rights reserved. Privacy Policy | Terms of Service