IBM ups the ante on Internet of Things analysis, launching a $3 billion bet on cloud-based ecosystem. How will Microsoft and Amazon respond?

IBM last fall introduced an Internet of Things Foundation service on its BlueMix cloud-based application platform. On Tuesday the company announced something much more substantial: a plan to invest more than $3 billion over the next four years to build a dedicated IoT business unit staffed by more than 2,000 consultants, researchers, and developers.

In addition to establishing a dedicated business unit for IoT, IBM announced it's building a cloud-based platform to help clients and ecosystem partners better integrate real-time data and insights from dispersed sources, such as sensors, directly into business operations. In a separate IoT-related announcement, IBM announced a new IoT ecosystem partnership with The Weather Company, which will add IBM as a cloud services provider.

IBM IoT Ecosystem: This ecosystem will expand partnerships with existing chip, device, and industry partners including ARM, AT&T, and Semtech, and, newly announced, The Weather Company -– to ensure the secure and seamless integration of data services and solutions on IBM’s open platform.

IBM is not alone in pursuing IoT business. Earlier this month Microsoft introduced an IoT suite on its Azure cloud. Amazon, Cisco, General Electric, and Intel are among the other tech giants floating IoT-specific offerings. Competition will no doubt be fiercest among cloud giants Amazon, IBM, and Microsoft around the depth of IoT services versus pricing. 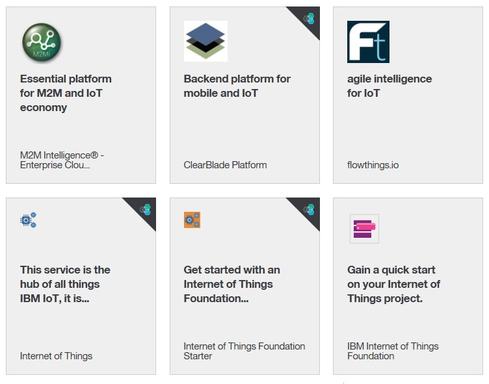 IBM And The Weather Company

The Weather Company, parent of The Weather Channel among other businesses, currently runs its massive weather-data-services platform -- which captures more than 20 terabytes of data per day to drive predictions -- exclusively on Amazon Web Services, but has long planned for multi-cloud operation.

"I believe that any serious cloud-based business or application needs to be built in a cloud-agnostic way," Weather Company CIO Bryson Koehler told InformationWeek in an email interview. "TWC has been on that journey for the last three years, and that's what has enabled us to deploy our data services platform onto IBM SoftLayer so we can power our business and strategic opportunities with IBM beyond what we could do with AWS alone."

IBM said weather data from The Weather Company's WSI (B2B) unit will be available to IBM IoT and industry ecosystem customers so they can power decisions related to supply chains and customer buying patterns with rapidly updated forecasts.

By creating a dedicated business unit, IBM will bring more scale and focus to IoT opportunities, according to Sam Adams, and IBM Research distinguished engineer.

"While IBM has had many IoT-related engagements with clients and a number of offerings in recent years, they were delivered as a value-adding technology to a broader solution, such as our Smarter Planet initiatives," Adams stated in an email interview with InformationWeek. "Given the maturity we see in our client's adoption of big data and analytics in both mobile and cloud contexts, we feel that the time is right for IoT to become a mainstream source of enterprise innovation across many industries."

Doug Henschen is Executive Editor of InformationWeek, where he covers the intersection of enterprise applications with information management, business intelligence, big data and analytics. He previously served as editor in chief of Intelligent Enterprise, editor in chief of ... View Full Bio
We welcome your comments on this topic on our social media channels, or [contact us directly] with questions about the site.
Comment  |
Email This  |
Print  |
RSS
More Insights
Webcasts
Unifying Your Endpoint Security Strategy
An Enterprise Guide to Web Security
More Webcasts
White Papers
Are Your Managed Services Right for Your Business?
Forrester Total Economic Impact Study: Team Cymru Pure Signal Recon
More White Papers
Reports
The State of Malware Threats
Enabling Enterprise Resiliency Through Cyberthreat Detection
More Reports

IBM will tie large scale IoT data collection into big data analytics, trying to get to the business value of all that data. Others will also, but it has a lot of experience in getting different systems and data types to work together.
Reply  |  Post Message  |  Messages List  |  Start a Board

One big question is how valuable a platform for IoT is -- are you just buying the table stakes functionality for an industry, like the insurance example, or are you buying somethig that can help you set youreself apart from rivals?
Reply  |  Post Message  |  Messages List  |  Start a Board
InformationWeek Is Getting an Upgrade!