The Accenture Technology Vision 2016 report examines five ways that adept digital companies are putting people first. Investing in the development and management of people will be necessary to navigate the tumultuous digital economy, according to Accenture.

People are the key to unlocking business success in an era of rapid technological disruption, according to global consulting firm Accenture. Taken at face value, this is a rather obvious assertion. Companies understand that technology relies upon people. The alleged no-poaching pact between leading Silicon Valley companies is a testament to that.

But Accenture, in its "Technology Vision 2016" report released today, looked at the relation between technology and people beyond the level of dependency. It explored how companies can thrive in an era of accelerating technology change by fostering a people-first culture.

Counterintuitive though it may seem at a time when automation is on the rise, investing in the development and management of people will be necessary to navigate the tumultuous digital economy, according to Accenture.

"High performers of the future won't merely consume more technology," said Paul Daugherty, Accenture's chief technology officer, in the report. "They will enable their people to accomplish more with technology."

Digital culture and talent will be what sets companies apart, Daugherty wrote.

This is a trend that has companies worried. In a survey of 3,100 IT and business executives, on which the report is based, Accenture found that 86% of respondents said they expect the pace of technological change will increase either rapidly or at an unprecedented rate over the next three years. Paralysis is the consequence of change that Accenture sees among many businesses, as companies struggle to understand how to adapt to a world in flux. 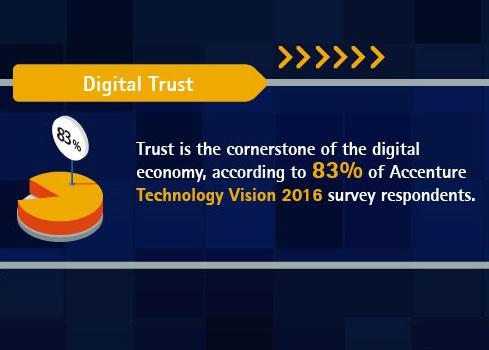 To succeed in this world, Accenture said that enterprises need to be built for change, for data, for embracing disruption, and for avoiding digital risks.

To be built for change, companies must ensure that their workers are learning new skills and can adapt to new roles. Among survey respondents, 37% said workforce training is significantly more important now than it was three years ago.

To be driven by data, companies have to make it widely available and actionable among business units, instead of taking direction based on tradition or on unsupported executive whims.

Embracing disruption means looking at change as an opportunity for ongoing improvement rather than as a threat. Accenture cited Samsung's C-Lab program, a competition in which employees pitch ideas for potential incubation, as an example of how companies can align their operations to embrace change.

As for avoiding digital risk, it isn't merely a matter of online security. It's about focusing on trust and ethical behavior from the outset.

Based on its survey results, Accenture identified five trends it deems essential for people-first companies:

1. Intelligent automation. This is an area of growing interest among companies across a variety of industries. Some 70% of survey respondents said they're investing more in artificial intelligence (AI) today than they did in 2013, according to the report. Accenture pointed to a Siemens manufacturing plant that has been automated to the point that some of its production lines can run for weeks without supervision. Yet, people haven't been banished by this automation. Rather, they have different roles than before, focused on programming, monitoring, and maintenance, the report explained.

2. Creating a liquid workforce. Not to be mistaken for a workforce that can be liquidated, a liquid workforce is one that can adapt to change and incorporate new skills. "By making training a core competency, organizations can actively develop the skills that will set them apart from competitors," the report said.

3. Platform building. Given the success of platform companies, including Amazon, Apple, Facebook, Google, and Microsoft, it's unsurprising that other companies would want a platform of their own. But the extent of interest in developing a platform business is startling: 81% of Accenture's survey respondents anticipated that platform-based business models will become part of their organizations' growth strategy within three years.

4. Planning for the unpredictable. Successful enterprises have become accustomed to digital disruption over the past few years. They've developed a sense of balance amid seismic shifts. Some 82% of survey respondents acknowledged that industry boundaries are blurring. Accenture said it sees the digital platform investments being made by people-first enterprises as a way to shape disruption.

5. Committing to trust. Among survey respondents, 83% said trust is essential in the digital economy, and 82% said lack of security and ethical controls could keep them from working with digital platforms from other companies. Accenture pointed to Apple -- and its insistence in court that it cannot unlock customer data on the iPhone -- as an example of how customer trust can be maintained.

Thomas Claburn has been writing about business and technology since 1996, for publications such as New Architect, PC Computing, InformationWeek, Salon, Wired, and Ziff Davis Smart Business. Before that, he worked in film and television, having earned a not particularly useful ... View Full Bio
We welcome your comments on this topic on our social media channels, or [contact us directly] with questions about the site.
Comment  |
Email This  |
Print  |
RSS
More Insights
Webcasts
People Are The Most Important Part of Autonomous SOC
Nip Ransomware in the FUD: Detecting Attacks Pre-Encryption
More Webcasts
White Papers
How a Trading Floor Continues its Operations During COVID-19 Lockdown
Aligning Cyber Skills to the MITRE ATT&CK Framework
More White Papers
Reports
Key Strategies for Managing New Risks in Cybersecurity
2021 Top Enterprise IT Trends - Network Computing
More Reports

"Most companies employees spend a good chunk of their time reacting and responding to things - tasks and email for instance. "

@vnewman2: I think that comes with overall planning and a good HR strategy. If you have clearly defined processes and people are fully aware of their work and have been given responsibility, they'll always be proactive and the work gets done in an orderly manner. If there's no seggregation of roles and things are done on adhoc basis, it spoils everything up and you have chaos. The culture is really what makes the difference.
Reply  |  Post Message  |  Messages List  |  Start a Board

"Not to be mistaken for a workforce that can be liquidated, a liquid workforce is one that can adapt to change and incorporate new skills. "By making training a core competency, organizations can actively develop the skills that will set them apart from competitors," the report said.

@tzubar - I couldn't agree more.  Culture is everything in Organizational Development.  Part of that culture is people's understanding of how work actually gets done - how truly productive work happens.  Most companies employees spend a good chunk of their time reacting and responding to things - tasks and email for instance.

Very little importance is placed on planning and being proactive - otherwise, we wouldn't need an 8 hour workday to accomplish what could typically be done in 4. How many people do you know that plan out their day ahead of time?  Sure, people schedule meetings and appointments in advance, but I'm talking about planning their workday in detail.  (e.g. From 10-11 I will answer emails.  From 11-1 I will write my report.  etc).  At any rate, my point is, when you spend all of your time reacting, you leave no time for any kind of "training" - formal or informal and no time to move the company ahead because you're fielding everything in the moment.
Reply  |  Post Message  |  Messages List  |  Start a Board

I'm pleased to learn automation has only changed the nature of some jobs instead of completely eliminating humans.

Encouraging a people importance over other metrics will certainly go a long way. Accenture appears to be doing well with this focus. It's good to see them offering this kind of advice.
Reply  |  Post Message  |  Messages List  |  Start a Board

I think the platform-based approach might work for a while, but it may not be a suitable approach in the long run. Right now, there may be room to add more platforms but very soon there might be a point where there's no longer the need to add new platforms and existing ones would have to be utilized to build products on top of them.

@kstarton: I think a liquid workforce is only possible with the help of a culture that encourages this. In a culture where people are encouraged to know about other areas of business and cross-functional collaboration is present, only then can you have people who can easily move around and switch roles. In companies where the interaction is limited and the exposure to other domains is not there, the workforce cannot be liquid.
Reply  |  Post Message  |  Messages List  |  Start a Board

Training is often one of the first things to go in a company concerned with the bottom line, but being able to train the people you have, especially in today's fliud climate of required skills can help set a company apart and help them to make money by valuing their people enough to help make them better at their jobs.
Reply  |  Post Message  |  Messages List  |  Start a Board

@John Mike: Another example of this is Amazon. It is continuously growing into a massive e retailer in India, through its customer satisfaction quotient.
Reply  |  Post Message  |  Messages List  |  Start a Board

Yes that's right. Every company that wants to be successful should have the liquid workforce. By this we mean that the employees should be trained enough to integrate with the new skills so they can make the company distinguishable from the others. The managed services company hold the employees that are usually all-rounder so they can perform various jobs at the same time. www.thebesgroup.co.uk/managed-services/
Reply  |  Post Message  |  Messages List  |  Start a Board
Editors' Choice
Hot Topics