After Ballmer: 8 Execs You Love To Hate - InformationWeek

Steve Ballmer was like the star of his own reality show -- tears, laughs, crazy stunts, and business deals that brought weekly drama. Whether he was pretending to stomp on an employee's iPhone to make a point or crying on stage, Ballmer attracted attention and headlines, as well as his fair share of haters.

It was never going to be easy for anyone to follow Bill Gates, and despite his significant business success, Ballmer has always been shrouded in controversy. Ballmer was too interesting to simply hate. He created the kind of love-hate relationship that is sort of fun to have, much like how you hate a rival sports team.

With Ballmer retired, I decided to think about some of the current technology leaders who could fill his shoes as the guy (or gal) you love to hate. I didn't want to just make a list of people nobody likes -- that's too easy. It's hard to imagine that former Paypal CEO and Facebook investor Peter Thiel, for example, had many fans after he announced he didn't support a woman's right to vote. But there's nothing fun about that.

What I looked for are complicated figures -- people who are probably a real hoot at dinner but who, because of business reasons, interesting character flaws, honest disagreements, or an amusing inability to keep their mouths shut, offer us endless entertainment. Dig into our slideshow for a list of executives I think can bring it like Ballmer. 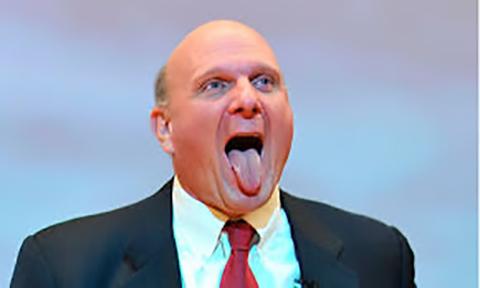 I would love to see a CEO of any gender implement groundbreaking family friendly policies in the U.S., but sadly that has yet to happen."

What if when interviewing a CEO of any gender one of unexpected question is about that. For example: Do you plan to implement groundbreaking family friendly policies in your [name of the company], or you have done it already?
If several CEO are asked this, maybe one thinks of the possibility of becoming a champion CEO and implements something good. Too crazy of an idea?
-SusanF
Reply  |  Post Message  |  Messages List  |  Start a Board

Says me, your "Platinum Rule" is the Golden Rule properly interpreted and is implicit in much of Old Testament teaching ("this is the law and the prophets").


With that, i think you're right, as Mrs. Mayer, as a working mother herself, should have been fully aware of the impact the no-telecommuting polcy was bound to have on many of her telecommuting employees, and should have taken steps to address it; which she apparently didn't do.

@SusanF: bingo! There is still a double standard when it comes to male and female CEOs. I would love to see a CEO of any gender implement groundbreaking family friendly policies in the U.S., but sadly that has yet to happen. Typical corporate policies do not favor families or a true work-life balance -- especially for parents -- and most companies here offer only the minimum required of them by law, which is a pretty low bar.
Reply  |  Post Message  |  Messages List  |  Start a Board

@Dave: 100% right on. I was so infuriated reading the coverage of that. I have a hard time believing that any male CEO would have been criticized in the same fashion. In fact, I've heard tales of some CEOs making guests wait ridiculous amounts of time as a sort of alpha-male power play. While it's ultimately her fault, I do have to ask: Where were her trusted team members to make sure that didn't happen?

Don't most CEOs at her level have a possee of support staff to make sure they get where they need to be on time? Where was Mayer's support staff?

I'm not anywhere near her level, but I know I have team members I can trust who would have had the hotel staff banging down my door to make sure I got to that meeting in time. Seems like Mayer was hung out to dry on this one.

@jries921: He sailed off in his yacht before we could snap a pic of him...

@Dave: There's a lot to admire about all of those CEOs, and I realize it's impossible to be in that kind of leadership position without making decisions that are going to leave some people really really unhappy. I happen to disagree in principal with the way she approached the work-life balance issues at Yahoo.

I had a management training program this week that presented what the trainer called the "platinum rule," next step up from the "golden rule."

So, the golden rule as we know is "do undo others as you would have others do unto you."

the platinum rule is to "treat others as they would LIKE to be treated."

I think that Mayer's policies violate that rule.

I think "devastation" is a bit of an exagerration. They may not gain more market share but they're not going anywhere anytime soon. They're the benchmark for most enterprise operations end user-wise. It'll take decades before another vendors applications push Windows out.
Reply  |  Post Message  |  Messages List  |  Start a Board

@Progman2000- I get that the policy exists, but with a little app, if you could make it self-service, what would be the harm in changing the policy?
Reply  |  Post Message  |  Messages List  |  Start a Board

@David, most marathons have a "no transfer, no refund" policy.  In a race like Boston with 40,000 runners, that is just a huge administrative headache on top of everything else.  If he actually ran a qualifying time to run the race, then that makes him an even bigger scumbag for letting her take someone elses bib.