Consumerization 2.0: IT's Only Road To Relevance - InformationWeek

50%
Tweet
Consumerization 1.0 was "we don't need IT." Today, we need IT to bridge the gap between consumer and business tech.

The fallacy of the "consumerization of IT" is that easy-to-use smartphones and consumer-oriented apps such as Dropbox make IT organizations less important. The reality is that consumerization is IT's ticket to continued relevance.

Make that IT's only ticket.

We've moved into Consumerization 2.0. The 1.0 version was: "See you, IT chumps. I got my iPhone, Dropbox, and Google Docs, and I'm out of here."

Consumerization 2.0 sets a higher standard: "Hey, IT, can we build a zippy app for my smartphone so I can grab customer data to do my job better? Is six weeks enough time?"

It used to be that in-house IT merely had to be functional -- employees had no choice but to use it. Now employees expect beautiful design and speedy delivery. And they expect to be able to use consumer apps -- or at least their enterprise cousins -- when they make sense. "It's survival mode now for IT," says Derek Roos, CEO and founder of Mendix, a Boston-based startup that promises to build, integrate, and deploy applications for customers in days or weeks rather than months or years. "If CIOs don't step up now, they won't be in charge five years from now."

The defining characteristics of this emerging 2.0 phase are:

Consumerization 2.0 is just getting underway. Just 30 percent of the companies in our 2013 InformationWeek 500 ranking cite widespread use of enterprise mobile apps by employees; another 30 percent say they're in limited use. Only 26 percent have an employee app store. 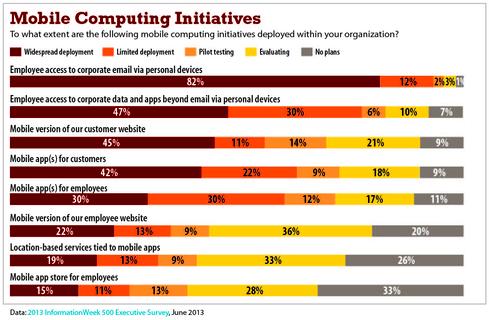 Like any major shift, Consumerization 2.0 will leave some IT roles and strategies behind. But IT teams that embrace it can become more relevant than ever. What follows is the kind of thinking that will get IT there.

Tech can't sit in the truck
Dish Network went mobile about five years ago when it rolled out ruggedized Windows laptops to thousands of the field technicians who install or repair Dish's satellite TV service at customers' homes. But that laptop was an eight-pound brick that techs had to carry along with all their other gear. "It solved some problems for us, but it's also a device that stayed in the truck a lot," says CIO Mike McClaskey.

In January 2012, McClaskey and his colleague Erik Carlson, the executive VP in charge of the field tech team, walked the International CES show floor together. When they saw the five-inch phone/tablet hybrids on display, McClaskey says, "a light went on."

Out went the ruggedized laptops, along with the push-to-talk phones and the GPS routing devices issued to every field tech. In came five-inch Samsung Galaxy Note phablets, in a rollout to 15,000 field technicians that took just six weeks. Dish estimates it's saving several million dollars this year from that three-for-one hardware swap.

More important, the gear is getting used. That's partly because of the handy, consumery hardware -- the Note is lightweight, fits in a cargo pants pocket or belt pouch, and is simple to use.

Thanks for the great insight to the next phase of consumerization Chris. Completely agree that IT should be in the front driver seat to provide guidance and the right tools/gear to increase business productivity, which increases their relevance at the same time. When IT bans consumer grade services such as dropbox, they should offer an enterprise grade solution that is easier to use and at the sometime offers the required security controls. As Chris further pointed out, data content management and content collaboration are the next areas where IT can influence. Accellion offers enterprise grade content management and collaboration solutions. Check out  http://www.accellion.com/solutions/mobile-enablement/mobile-productivity for more info.
Reply  |  Post Message  |  Messages List  |  Start a Board

Hey Chris, great insight. I'd add a fifth defining characteristic of consumerization 2.0 and that's the greater role that DevOps will play in IT moving forward. I can see that as creating even more relevance for IT. You mention "speedy delivery" and "integration with enterprise apps and data," and with that combination and the tighter integration the LOBs will have with IT to develop the mobile apps that support their business processes, a more sophisticated DevOps approach will not only improve the quality of IT delivery for the business, but also boost the relevance of IT in a Consumerization 2.0 world.
Reply  |  Post Message  |  Messages List  |  Start a Board

I love Celestica's approach:give tech-savvy employees a simple app dev framework and let them experiment on their own. But don't give them the keys to the kingdom--thus this planned governance committee to keep track of those apps. It'll be interesting to see how that goverance committee manages things. It sounds like a good idea, but will it quash the grassroots energy at the company around app development?
Reply  |  Post Message  |  Messages List  |  Start a Board
Editors' Choice
Hot Topics