In the Electronic Frontier Foundation's fifth annual report, Apple gets high marks for protecting privacy, while WhatsApp and AT&T land at the bottom.

The digital rights non-profit Electronic Freedom Foundation (EFF) released its annual "Who Has Your Back?" data privacy report Wednesday, which singled out companies such as Apple and Adobe for protecting their customers. The two tech giants were among nine companies that received the organization's highest rating.

The report commended Apple for its strong stance regarding user rights, transparency, and privacy, and noted the company promises to provide advance notice to users about government data demands and will delay notice only in limited circumstances.

It's no surprise that Apple ranked high in this year's report. Only a few weeks ago, CEO Tim Cook took several other companies to task, among them Google, for how they use their customers' information for profit.

On the other end of the scale, telecommunications giant AT&T, chat application Whatsapp, which is owned by social media giant Facebook, received the lowest possible rating of one star. 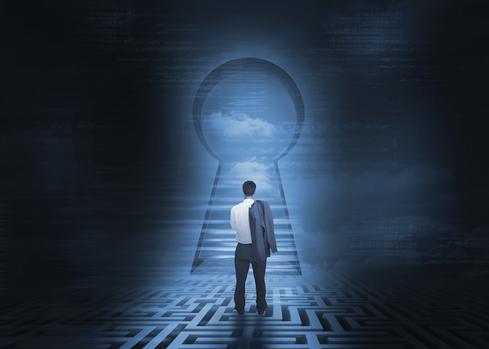 While WhatsApp earned credit for its parent company's public policy position opposing backdoors, it lagged behind other companies when it comes to the EFF's industry-accepted best practices rubric.

These standards were developed over the course of the last four years of EFF reports.

This category is based on three main issues: Requiring a warrant before handing over user content, publishing regular transparency reports, and publishing law enforcement guides.

"In 2011, no company received credit in all of these categories (or even in two of those categories, since in 2011 we didn't include a category for requiring warrants for content)," the report, released June 17, noted. "This year, 23 of the 24 companies in our report have adopted these principles. It's clear that these best practices truly are accepted by the technology industry. WhatsApp is notably lagging behind."

One-star-rated AT&T was knocked for refusing to promise to provide advance notice to users about government data demands and for not publishing information about its data retention policies, including retention of IP addresses and deleted content.

"Users should look to companies like Google, Apple, Facebook, and Amazon to be transparent about the types of content that is blocked or censored in response to government requests, as well as what deleted data is kept around in case government agents seek it in the future," the report stated. "We also look to these companies to take a principled stance against government-mandated backdoors."

[Read more about what the EFF had to say about NSA spying.]

Microsoft, Twitter, and Google all scored lower this year than last year, thanks to their more nebulous information request disclosure policies.

Microsoft in particular was singled out for its failure to provide a report detailing government content removal requests, though the software giant said that would be remedied this year. 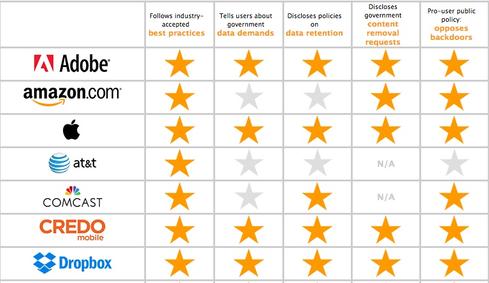 "We are pleased to see major tech companies competing on privacy and user rights," the report concluded. "Practices that encourage transparency with users about government data requests are becoming the default for companies across the web. While we're only able to judge a small selection of the tech industry, we believe this is emblematic of a broader shift."

Other companies that scored a high ranking in the 2015 report include Dropbox, Wikimedia, Yahoo!, Credo Mobile, Sonic.net, and WordPress.

Nathan Eddy is a freelance writer for InformationWeek. He has written for Popular Mechanics, Sales & Marketing Management Magazine, FierceMarkets, and CRN, among others. In 2012 he made his first documentary film, The Absent Column. He currently lives in Berlin. View Full Bio
We welcome your comments on this topic on our social media channels, or [contact us directly] with questions about the site.
Comment  |
Email This  |
Print  |
RSS
More Insights
Webcasts
Bolstering Your Enterprise Cyber Risk Assessment
4 Practical Tips for Building a Data Lake
More Webcasts
White Papers
The State of Malware Threats
Intelligent Load Management
More White Papers
Reports
2021 Digital Transformation Report
Planning Your Digital Transformation Roadmap
More Reports