The UNLV IT staff had to be ready for a variety of requests -- often at the last minute -- as the school prepared to host the third Presidential debate earlier this month. Here's the inside story.

In mid-October, red, white, and blue bunting hung from balconies around the University of Nevada at Las Vegas campus. A red banner saying, "UNLV: Different, Daring, Diverse," hung from the entrance to the campus hotel school, where staffers from several major networks would stay.

As Oct. 19 arrived, the date of the third 2016 Presidential debate, Cam Johnson, UNLV manager of the networking operations center, knew it wasn't going to be just another day on campus.

On that date, it was up to Johnson to ensure that all the technical operations for the event went smoothly. All told, the event had cost $8 million, according to an account in the Las Vegas Sun.

Johnson wasn't acquainted with all the details. A share of the total was dedicated to security, but his department enjoyed resources it normally didn't have in order to cope with the event. 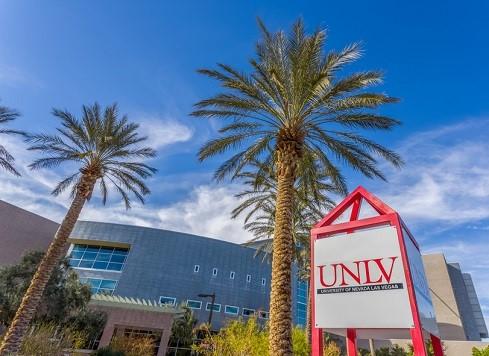 A big chunk of the $8 million had to come from the Las Vegas Convention and Visitors Authority, which knew that such an event would raise the profile of Las Vegas as a site for future significant events, but only if it was staged successfully.

That's where Johnson, his staff, and an auxiliary group of student volunteers came in. About half, or 50, of the full-time IT employees, were dedicated to staging the event in the weeks leading up to it.

An additional 30 student interns and volunteers supplemented their efforts.

"We provided 24 by 7 support for six days" for any problem any member of a candidate's staff or news staff encountered, he recalled in an interview with InformationWeek.

Consideration was given priority to providing good wireless connections near the Mack & Thomas Center, where the debate took place in a 700-seat auditorium. Wireless devices banned in the hall, but nearby were a 250-seat overflow room for news personnel, a media filing center, and Spin Alley, where various experts on the campaign set up booths to be readily available to the press.

The Need for Wireless

Johnson said UNLV IT staff counted 1,200 unique wireless devices connected via the network UNLV provided during the debate. It also provided cable Ethernet connections, as well, in case someone wanted one. "Some of the folks in Spin Alley wanted plug in connections," he noted.

UNLV IT made sure it had service from two separate ISPs for redundant connections to the internet. It set up an extra domain name server, Dynamic Host Configuration Protocol servers, RADIUS (Remote Authentication Dial-in User Service) servers, and "a handful of others," including network monitoring servers.

The university made sure all the server logs were "Splunked," or given real-time log analysis by the open source Splunk system for operational feedback.

UNLV had fortunately been planning to stage the event for months. Johnson said he was tipped off in a conversation with a counterpart at Hofstra University on Long Island, host of a previous debate, that some of the visitors would demand plain old telephone service.

"You'd think just an internet connection would be fine," he recalled, "but they warned us the demand for POTS was higher than they anticipated." That turned out to be the case at UNLV as well.

Some visitors wanted to know about advertising on the local television station. Johnson's staff was ready and able to show visitors a rate card. If they wanted a wired internet connection, they were shown how to run a line to the nearest port.

If a visiting news crew needed a printer or was having trouble connecting to a printer, he had staff ready to help on that front as well.

"For us it wasn't just a simple formula -- everybody will use this. They wanted a variety of old and new technology."

But mainly, said Johnson, "it was all about the wireless connections."

The 30 student helpers were crucial for pulling cables to all the locations that needed them. They served as runners between visitors and busy IT managers as problems arose. In some cases, they were able to troubleshoot problems with a visitor's laptop connecting to the network, due to their own experience with personal computers on campus.

"They got to do a lot of things that students don't get to do in their normal job."

It's likely also they helped all the visiting news staffs find their way around campus, get snacks when they couldn't get away from their stations, and provided minor logistical support that only on-site expertise could supply.

That was necessary because, despite months of advance notice, many reporters, TV news teams, and network personalities didn't make their needs known until the last minute, as they showed up. "We thought we would see a lot of pre-orders, but we didn't," Johnson said. He had been briefed on the demands of such an event, but realized as the event drew near, the IT staff was going to have to be ready for anything.

"We had the requirements but they were fluid. We had to be rather flexible in how we were doing things," he said.

They learned what was needed by many news teams as their advance people came in two or three days ahead of the event and as the news writers and commentators themselves arrived the day before, or in many cases, the day of the event. That's when the wisdom of having half the IT staff on hand and lots of student help paid off.

[Want to see why technology is playing an important role in the election? Read Why Hackers Are Getting 'All Political' This Year.]

"Communications is the key," said Johnson, and by that, he meant the face to face, IT to visitor communications that had to occur for everything to go smoothly. Everyone had been coached beforehand that they were to remain politically neutral and concentrate on ensuring good service, regardless of personal opinions.

UNLV like Nevada itself, a swing state, represented both sides of the political ledger in an unusually outspoken and division year.

Johnson said that attitude was carried off as planned without incident. The staff had business cards ready to hand out with the wireless log-in credentials and kept all communications on a positive note, even when anxious visitors sought instant remedies. "UNLV was able to put its best foot forward," he observed.

Such events have typically been held at large, private universities in the east. UNLV wanted a public university in the West to be able to compete as a future host. "We're starting up a medical school here ... We knew this event could do a lot for us to get our name out there."

Charles Babcock is an editor-at-large for InformationWeek and author of Management Strategies for the Cloud Revolution, a McGraw-Hill book. He is the former editor-in-chief of Digital News, former software editor of Computerworld and former technology editor of Interactive ... View Full Bio
We welcome your comments on this topic on our social media channels, or [contact us directly] with questions about the site.
Comment  |
Email This  |
Print  |
RSS
More Insights
Webcasts
Disaster Recovery/Business Continuity in the New Normal
4 Practical Tips for Building a Data Lake
More Webcasts
White Papers
AWS Lambda Security Best Practices
The Importance of Multi-Source Threat Intelligence
More White Papers
Reports
A Practical Guide to Enabling 5G Deployments
Gartner's Top 9 Security Trends in 2020
More Reports

In a follow up message, Cam Johnson noted that UNLV installed 309 POTS or telephone land lines for the event. In addition, he came up with stats on the number of network access points --164. A total of 53 switches and 16 servers needed to be installed.
Reply  |  Post Message  |  Messages List  |  Start a Board

The two previous Presidential debates were held at Hofstra University in Hempstead, N.Y., and at Washington University in St. Louis, both private universities. Debates at public schools in the West are infrequent. Before the UNLV-hosted event, the last large. public Western university to stage a debate was Arizona State University, which hosted Sen. John Kerry and President George W. Bush on Oct. 13, 2004. The Univesity of Denver, a private school, hosted the Oct. 3, 2012, debate between President Barack Obama and Mitt Romney. Other schools that have hosted recent debates include: Lynn University in Boca Raton, Fla., and Centre College in Danville, Ky. in 2012. In 2008. it was the University of Missippi in Oxford, Belmont University in Nashville, Tenn., and Hofstra again. In 2004, Case Western Reserve in Cleveland and Washington University in St. Louis again, along with Arizona State University.
Reply  |  Post Message  |  Messages List  |  Start a Board
InformationWeek Is Getting an Upgrade!