Who would win a fistfight between a man and a robot? Take a look at the evidence, and see if you agree with our conclusion.

Let's get ready to ruuuuummmmmbbbbbblllllleeee! It's time to settle the most important question facing humanity today -- who would win a fight between robots and humans? Earlier this week I wrote about how robots are helping transform the medical industry, and I made a joke about how this was the first step in enslaving all humans. It got me to thinking. How close are we to the apocalyptic sci-fi inevitability of serving our robot masters? I'm giving you a ringside seat to the most important fight since Luke destroyed the Death Star. We'll sell you the whole seat, but you'll only need the edge!

In this corner, wearing the robot-themed Spandex suit, 5 feet 9 inches tall and weighing in at 172 lbs, with a reach of 69 inches, from Parts Unknown it is the Average North American Male (I picked a man because we all know only a man would be dumb enough to fight a robot with his fists). 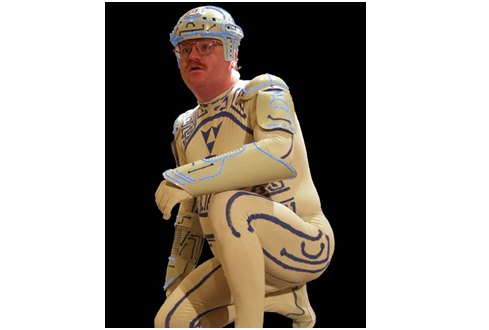 Average Joe can run around 15 miles per hour, can lift 161 lbs off the floor, and is capable of complex thought and deduction. Can you smell what Average North American Male is cooking? Probably, since it is more than likely on a grill.

In this corner, wearing no trunks because it's a robot, is the sum total of all robots made by mankind. We'll get to the tale of the tape on these guys in a minute. But first the rules:

We're talking a one-on-one fight here. No weapons. Because right now robots are still using only the weapons we give them. The fight will go three minutes, because the one thing we do know is that a robot can outlast a human because it never gets tired. Also, it is for points, because we know a human fist can't punch through steel, and we know that a smart human will just unplug the thing. Do humans have a chance against a robot? Let's find out:

Strength
Average Human can lift 162 lbs. Just for point of comparison, the world record human deadlift is 1,155 lbs. Sounds impressive until you see this robot can lift over 1,000 kg -- that's well over a ton.

Just in case that brute isn't intimidating enough, we're not far from an even scarier prospect. A team at Berkeley has created micromuscles that use torsion, similar to the way human muscles work, to lift up to 50 times their own weight. Right now, those muscles are tiny, but it is only a matter of time until we have robots flipping cars like the Hulk.

Advantage: Robots will run wild on you just like Hulkamania.

Speed
Average Joe can kick it up to about 15 miles per hour when he is in a hurry and can run at about 7 mph if he's running a long time. Again, if you want superhuman, Usain Bolt can churn to over 27 miles per hour, and the world's best marathoners keep a pace over 12 mph. The world's fastest robot,the Cheetah, can hit 29 mph on a treadmill with a boom to help keep it centered. Off the treadmill, its free-running cousin, the Wild Cat, is still incredibly frightening and fast (they don't seem to want to say exactly how fast).

Advantage: Humans, because of the tether to keep the robots balanced, but humans do not have a lock on this category. At least we can turn better than they can.

Hand Quickness
If you're going to fight, you're going to need to have quick hands. And honestly, this is where I thought humans would win. Most computers need to be programmed to move. They don't react well.

Our brain's computer does amazing calculations every time it needs to track something in flight. The next time you watch an outfielder go into a full sprint, leap over a wall, and catch a ball before it becomes a home run, try to appreciate the trillions of calculations going on in the brain. The brain has

@kstaron- I see that, but I also see the flip side. Leaning with no emotion means no hatred either.
Reply  |  Post Message  |  Messages List  |  Start a Board

@zerox203- Thanks. I do think one of the issues is the teams being divided, but not necessarily by distance but by intellectual property law. If I make a catching robot, I have IP on that. If someone else makes a fast robot, they have IP on that. So now if I want to make a fast moving catching robot, I have to either re-invent the wheel on the speed thing in a way that doesn't violate their IP or I have to license. Since commercial opportunities are still limited, licensing doesn't make sense.

So I think we've got people making lots of parts of a really assume robot and someone (the Defense Department? Google?) will have to put up the money to pull all of these together into a realy fast robot that sings while it catches balls and plays chess. We're probably going to see the same problem in robots that we see in smart phones. Competing companies will be paying each other every time they make a robot because of all the patent suits.
Reply  |  Post Message  |  Messages List  |  Start a Board

@Thomas- Ha! Well yeah, but we already know what would happen between say a drone and a human pilot or a soldier versus a robot weapons platform. They'd be toast.

The drones can out turn a human in a plane because they don't have to worry about blacking out. So they'd win. A robot weapon platform carries way more firepower than a human could (though I'll admit that they are't nearly as smart).

I don't see a robot with all the qualities you have discusses still far away.  My prediction may be in a 100 year.


A hundred years? That seems fairly extreme to me, Pedro. It was only a little over 50 years between the Wright Brothers putting a plane in the air and Sputnik. 60 years to we put people on the moon.

100 years is a lot of time in engineering, especially since we've already had out Kitty Hawk moment in robots. That said, it is funny how having an automonmous robot doing all of these things at once is so much harder than sending a spacecraft out of our own solar system, spmething we've already accomplished.
Reply  |  Post Message  |  Messages List  |  Start a Board

If you're fighting a robot with your fists, you're doing it wrong.
Reply  |  Post Message  |  Messages List  |  Start a Board

@TerryB- I don't know. You can take apart C3-P0 and put his pieces in a backpack, carry him around Cloud City on the back of a wookie while stormtroopers shoot at him, and he still functions. That seems pretty tough to me. :)
Reply  |  Post Message  |  Messages List  |  Start a Board