Outsourcing: Why Onshore Vs. Offshore Isn't The Right Question - InformationWeek

Well publicized offshore outsourcing challenges, a narrowing labor-cost gap, and political considerations have some aggressively promoting onshoring. But they're missing the point.

Enterprises elect to bring offshore operations onshore or in-house for a number of reasons. While performance certainly can play a role, motivations also include strategic business reasons and a belief that the enterprise can perform the function better and more cost effectively than the offshore service provider. Or, maybe it’s convinced that the value generated by increased service quality (via shorter cycle time, reduced error rate, better customer satisfaction) that’s, in theory, achieved by performing functions in-house or via an onshore model will more than offset the increase in costs.

This cost gap might be closed further by the better productivity of onshore resources relative to offshore, eliminating the management overhead associated with offshore operations, and continued increases in labor rates in offshore markets.

Some enterprises are also driven by the public relations benefits and goodwill that can come by communicating that they’re creating jobs in the US instead of shipping them overseas. Apple’s recent moves are a prime example.

These are all potentially valid reasons for considering onshoring (either in-house or outsourced). However, a rational, defendable choice -- as opposed to emotional or “gut-feel” reactions -- requires an objective analysis and quantification of costs, risks, and value generated.

I’ll discuss how to go about that analysis, but first, take a hard look at whether your own house is in order, because that’s often the right question to ask.

[ Hey, you met budget! But, did you deliver value? See How To Budget Your Way To Irrelevance. ]

There’s no shortage of press on offshore outsourcing deals gone bad, and one of the most common reasons I hear for moving work back to the US is that the relationship with the current vendor or service delivery performance has deteriorated -- potentially to the point of contract breach.

If these issues aren’t addressed, simply moving the function from offshore to onshore may do very little to address the performance problems but will most likely increase costs -- the worst of both worlds.

Percentage of Outsourced IT Operations 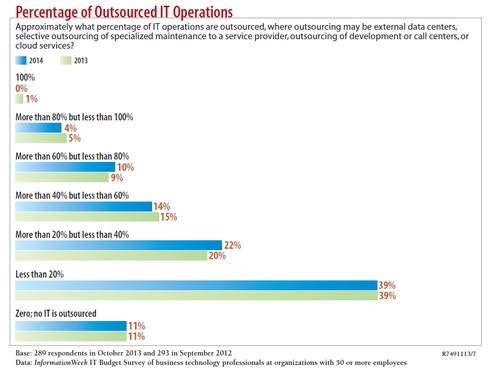 In my experience, most offshore provider staffers have adequate (perhaps even excellent) credentials and expertise. Most service-related issues stem from difficulty in managing these resources, especially problems in communicating requirements and offering feedback on quality. Blame a number of factors, including cultural differences, language barriers, time zone management, and attrition. However, take a hard look at what investments both the service provider and your own company have made in people, processes, and technologies to mitigate these obstacles. Have you done your part?

Managing offshore resources effectively and efficiently is admittedly a difficult task, but companies that work to address the problems can get access to quality services at price points that still cannot be matched with onshore resources.

OK, on to analysis.

The onshore and insourcing business case
To make a positive business case for onshoring, the effort has to create significant value (much of it “soft”) to overcome the “hard” and easily quantifiable cost advantages provided by offshore service delivery. Ask yourself:

The reality is that offshore outsourcing will remain a viable option for most enterprises. It represents a large base of IT operations, and it would require a massive shift to rapidly change that balance. Forrester’s 2012 Forrsights Services Survey showed 26 percent of companies plan to implement or expand the use of offshore resources for IT services. And Deloitte’s 2012 Global Outsourcing and Insourcing Survey shows 51 percent of respondents’ outsourced IT services were provided offshore, and 70 percent of future planned IT outsourcing would be provided offshore. These surveys are indicative of the continued acceptance by US enterprises of outsourced offshore operations even in the light of high-profile instances of insourcing and onshoring.

Decisions about outsourcing and offshoring are rarely simple or quick, and they won't get easier as CIOs get more options from SaaS and cloud. But don't lose sight of the real question: What's the optimum mix for this business need?

First there was offshoring, then onshoring, now there's "reshoring"? What next -- dinahshoring?
Reply  |  Post Message  |  Messages List  |  Start a Board

The question I hear a lot is "can this outsourcer innovate?" The outsourcer's incentive is often to keep status quo and not to re-invent a process in a way that slashes staffing and costs.
Reply  |  Post Message  |  Messages List  |  Start a Board

Re "I do take exception to the "fox guarding the henhouse" comment."

Would it help if I said I am a fan of foxes? They're clever and adaptable creatures that live by their wiles. Sounds like some IT pros I know.

Judging from the heated response of IT pros to any discussions of sending jobs offshore (or H1-B), there seems to be a 'fox guarding the henhouse' angle.

It must be tempting for an on-staff IT pro to at least downplay the quality of offshore partners, at worst actively seek to sandbag these relationships. Maybe it's fear their jobs will be the next to go, maybe just general prejudice. Either way, if done in a subtle way, that must be difficult for business management to detect.
Reply  |  Post Message  |  Messages List  |  Start a Board

There's no shortage of press on onshore outsourcing deals gone bad either. As the author suggests, problems with offshore providers can arise because of time zone and cultural/communications differences, but when outsourcing relationships fail it's usually for more complex reasons.
Reply  |  Post Message  |  Messages List  |  Start a Board
InformationWeek Is Getting an Upgrade!