Cognitive systems will only eliminate a small portion of jobs in the near future, according to Forrester. But the impact will still be significant.

9 Tools To Help You Build A Better Bot
(Click image for larger view and slideshow.)

The future of human workers is not as bleak as many fear, says a recent report by research firm Forrester.

Though cognitive technologies like artificial intelligence, machine learning, and robotic automation will eliminate 16% of US jobs by 2025, according to Forrester, they will also create new jobs amounting to a 9% increase over the same period.

The net job loss, 7%, thus qualifies as only a bit bleak. It's not quite the apocalyptic 47% job loss figure suggested in Carl Benedikt Frey's and Michael Osborne's 2013 report, "The Future of Employment: How Susceptible Are Jobs to Computerisation?"

Last month, the Organisation for Economic Co-operation and Development (OECD) came to a similar conclusion in a report titled  "The Risk of Automation for Jobs in OECD Countries: A Comparative Analysis." The OECD report said about 9% of jobs on average across OECD states are subject to automation.

But white collar office workers should sleep with one eye open. Forrester projects that the 89 million white collar jobs in the US will decline by 12% between 2016 and 2025. Four categories of worker can expect to be affected, though at different rates: office and administrative workers; sales employees; management, business, and financial personnel; and professionals.

Office and administrative support personnel should expect rapid job cannibalization over the next few years. The bloodletting should end around 2024, Forrester anticipates, because most basic tasks will be automated and workers will have moved on to "higher-order tasks" (or perhaps will have been promoted to funeral director).

A million business-to-business salespeople will lose their jobs by 2020, Forrester predicts, due to self-service automation. The report's explanation for this is that "the knowledge set for B2B sales is more constrained" than other office jobs, making it relatively easy to create chat bots that can handle sales support tasks. 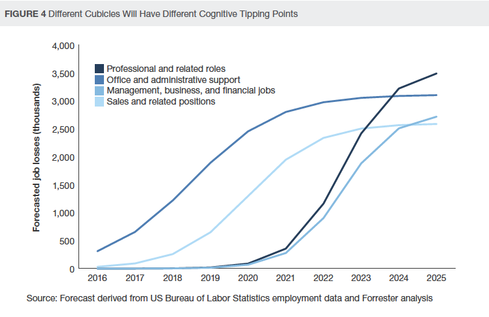 Professionals and those in management, business, and financial positions can rest easy for a few years, but not forever. By 2021, Forrester says it expects cognitive systems to have reached a level of sophistication that allows meaningful participation in decision making.

The firm's report recounts how a senior director for UBS describes the process of closing its financial reports as marred by data quality issues and inefficiencies. "We believe that robots will be closing the books within five years," the executive says.

In many cases, automated systems will not replace workers, but will work alongside them. Businesses will need to ensure that humans and machines get along. "Human and organizational issues keep automation technologists up at night -- and rightly so, because human/robot frictions have already begun," the report says.

For companies implementing changes along these lines, Forrester advises allocating resources to cultural and change management issues, and even providing financial incentives in relation to the rollout of cognitive systems. The firm also recommends that companies rethink their talent acquisition strategies to ensure they have personnel with the skills needed to complement cognitive systems.

Even this less bleak future anticipated by Forrester sounds unappealing. "The cultural backlash will be real and powerful, but it won't roll automation back," the report concludes. "Labor conflict over automation will escalate as millions of today’s employees, short of digital-age skills, slide into the obsolescence queue."

Thomas Claburn has been writing about business and technology since 1996, for publications such as New Architect, PC Computing, InformationWeek, Salon, Wired, and Ziff Davis Smart Business. Before that, he worked in film and television, having earned a not particularly useful ... View Full Bio
We welcome your comments on this topic on our social media channels, or [contact us directly] with questions about the site.
Comment  |
Email This  |
Print  |
RSS
More Insights
Webcasts
People Are The Most Important Part of Autonomous SOC
Don't Miss This Cybersecurity Virtual Event
More Webcasts
White Papers
High Performance Applications with the Dominion KX III
Definitive Guide to Endpoint Privilege Management
More White Papers
Reports
Gartner Market Guide for Insider Risk Management Solutions
The State of Cloud Computing - Fall 2020
More Reports

While I agree that the technology will be there for this kind of transformation, I doubt it will take place as predicted.  Just because a technology exists doesn't mean we have to use it.  Right now we see the wave of technological advancements as improvements to society.  There will come a point where someone, maybe it's me, who questions if "more is better".   We may start to ask "Who" is benefiting.  There may even be laws passed , similar to laws that describe monopoly power in a corporation.  There maybe laws that say that if technology "harms" the consumer, or maybe even "harms" the worker that that technology is in violation.  This may seem far fetched and backwards, but that is because right now technology has the "edge" and is considered supreme.  Technology will not always be viewed this way.  There have been periods of rapid change that are usually followed by periods of revolt .  The 60's could be viewed as a revolt against technology in a way.  People shunned technology and went back to mother earth.  Anti-war protestors blew up buildings that housed "military secrets" but what they really housed was the technology to allow artilery to target the enemy better...target tables...calculations that sped up the time needed to target the enemy and improve accuracy.  Could some future protesters blow up buildings that house the "brains" of machines that will take their jobs?  The idea of a robot war or machine vs. man has been a part of sci-fi movies and literature forever, but the idea is not fantasy, it is reality.  Man will not go quietly.  Technologists, if they really want the future that is predicted in this article, need to account for man's more primitive nature.  But technologists being the humans they are probably won't plan this very well, it will in fact have to be a machine that learns how to convince man that using techology is to his (man's) benefit, and here in lies the root of the deception...to whose benefit is it for technolgy to advance to this level. The answer is: it benefits the machine.
Reply  |  Post Message  |  Messages List  |  Start a Board
Editors' Choice
Hot Topics