Is every hire a special little snowflake? That uniqueness affects the social dynamics of high-performing leadership teams.

Ever wonder why executives brought in from the outside almost always replace competent members of the existing leadership team?

The easy answer is that the hiring manager has identified "talent issues" in the space in question. He isn't the only one who sees the need for a change. Every senior executive who has ever dealt with that space, every stakeholder who has ever interacted with it, every member of the team itself… hell, every clown in that little car has an opinion about who should get a pie to the face -- and not a one thinks it's him or her.

Filling an empty management slot has the same narcotic effect as buying a lottery ticket. Winning is never the point. That dollar buys you a chance to let your imagination run amok. In every clown's mind, that new hire might just as well be Oprah with a bag full of silver gift boxes. "You get a car! You get a car! Everybody gets a car!" And by car I mean employees who don't suck.

[Coverlet writes a love letter to marketers who buy his contact information. Read My Dearest Spammer. ]

But let's put wishful thinking aside for a second, because the key word in that first sentence is "competent." We're not talking about replacing underperformers. Rather, leaders who either met or exceeded expectations. To manage them out seems arbitrary, disloyal, and disillusioning, if not cruel.

It's a "lawyer up" moment for both parties, because both sides are right. Yes, he's a rock star, and yes, there's no place for him in our new boy band. I mean, seriously, he has the same damned haircut as the new lead singer.

What follows are some thoughts on this intractable talent paradox: the idea that most organizations don't really have the kinds of talent issues that everyone is convinced exist. Rather, organizations bring them on with changes in leadership. The root of the problem, I argue, is that we're all…

Special little snowflakes
If management books are ever to ascend to the status of art or literature, they'll need to balance their cheery professionalism with some darkness and angst. They'll need to moderate their optimistic solutionism with the occasional "We have no idea how to solve this problem and we never will." I would love to see Jim Collins start his next book with:

"Life breaks us. And each of us in a unique way. Even if you experience no significant breaks, like the teens struggling with the ennui of suburbia or the adults suffering from what Louis CK calls white people problems, you still must end up broken. Because never experiencing real misfortune leaves you bland and hollow, with a skewed frame of reference and the inability to empathize with the damaged majority. Good managers recognize that we're all broken. And the best managers were the kids who very early on learned to play with and enjoy broken toys."

That’s why Malcolm Gladwell's David and Goliath resonates with so many people. It makes complete sense to the broken masses that a disproportionate number of our presidents lost a parent at an early age or that a large percentage of our business leaders are dyslexic. What builds character better than an unexpected right hook from life? What doesn't knock me out… 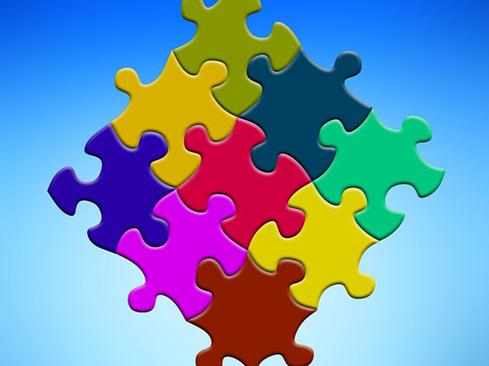 Mind you, most people have enough sense not to use terms like broken or damaged. A more sensitive, palatable metaphor would be a jigsaw puzzle. Where the metaphor falls short is that our mental picture of a jigsaw is of similarly shaped interlocking pieces. That image signals a uniformity that simply isn't there in people. Remember: Each one of us is broken in a unique way, so the real-life puzzle of business management is more complex.

So, continuing with Collins' next master work:

"Seasoned managers have either an implicit or explicit understanding of what their own puzzle piece looks like. And they understand that high-performing leadership teams are puzzles whose pieces all fit together. So as they move from role to role, company to company, the best executives drag along the employees whose puzzle pieces fit theirs."

What do organizations do when they manage a leader out of a company? They either bring in someone from the outside (finding an entirely new and different puzzle piece) or they promote from within (taking one of the pieces

"And the best managers were the kids who very early on learned to play with and enjoy broken toys." Nice. Entitlement is a disease. The entitled generally don't make good managers or interesting people.
Reply  |  Post Message  |  Messages List  |  Start a Board

You don't think people can, if not repair themselves, at least tack on some patches and spackle, enough to make the dynamic work? Granted, that sort of gumption doesn't happen for everyone, or even most, but I like to think it's possible.

The military has it right -- every couple of years everyone gets reshuffled. Opportunity for reinvention.
Reply  |  Post Message  |  Messages List  |  Start a Board
<<   <   Page 2 / 2
Editors' Choice
Hot Topics